Companionship can be tricky business, especially when it involves hunting down and killing murderous witches that are intent on exacting bloody vengeance on all humanity. In Knights Contract, you play as an immortal executioner named Heinrich, who tears through his unholy enemies with a fearsome scythe-bladed, hammer-headed weapon. Your companion is Gretchen, a witch who hunts her fallen kin and supports Heinrich with a deadly array of spells. With their powers combined, you cut a bloody swath across the medieval world, engaging enemies in gruesome and satisfying combat. At its best, Knights Contract lets you revel in the brutal action and intriguing world design. At its worst, it confounds you with cheap deaths, ruthless quick-time events, and mazelike levels. Knights Contract is not a journey for the faint of heart, but those willing to suffer some hardships will ultimately find satisfaction in a world well saved.

Being cursed with immortality is a pretty rough gig, it seems, and Heinrich is eager to shuffle off his mortal coil. So when a witch named Gretchen comes around and offers to do just that, he agrees to accompany her on her quest. You soon find out that the two have a history that is intricately entwined with that of the evil witches devoted to destroying humanity. Though the writing is often lackluster, the tale that unfolds is an interesting one, and as Heinrich and Gretchen unearth the betrayals of the past, there are some intriguing revelations and touching moments. The two don't have much chemistry, but the story draws you in and works well. And though they don't match the excellent animation of the videos that run when you let the game linger on the title screen, each new cutscene is a welcome one.

Throughout the majority of Knights Contract, you play as Heinrich. Using light and heavy attacks in conjunction with grapples and dodges, you slash and smash your way through legions of enemies using a weapon that is part scythe, part hammer, and part switchblade. Combos are easy to string together and don't get much more involved than a certain number of light attacks followed by a certain number of heavy attacks. There isn't a lot of complexity here, and it sometimes feels like just a step or two above simple button mashing. Despite this simplicity, you are encouraged to master Heinrich's moves. A combo ranking system gives bonuses that can be used to increase your power, and end-of-level score breakdowns and online leaderboards provide a competitive outlet for motivated players. The clangs of smashed armor and squishes of sundered flesh provide additional rewards of their own.

While it is inherently satisfying to carve up baddies, combat wouldn't be nearly as enjoyable without Gretchen lending her magical prowess to your onslaughts. She is an AI character and will defend herself with a few small spells, but you choose when she unleashes the good stuff. These magical attacks can entwine enemies in thorny vines or impale them with spikes. They can magnify your scythe to a bigger size or create a succession of shadow scythes so that one swing hits four times. Catching an enemy in these attacks makes you feel even more powerful because your skills are magically compounded. You eventually unlock more spells than you can fit in the four available slots, so you have to choose which ones you want equipped at what time. Not every enemy or boss is susceptible to the same magic, and finding the right spell can make combat easier and bloodier. As you earn souls from killing enemies, you can upgrade your spells to make them even nastier, so that single phantom sword can turn into a deadly parade of swords that chases your enemies around the arena.

Assaulting your foes with magical and martial attacks is gratifying, and executing gruesome finishers puts an exclamation point on the whole affair. When you hit a weakened enemy with a magical attack, a button prompt gives you a chance to finish with style. That toothy trap you laid suddenly becomes a chomping, devouring maw, and those swords impale your enemies and split them into bloody chunks. Finding the right finisher for the right situation can boost your combo rating, earning you more souls and pouring points into your witch point gauge. Once this gauge is full, you can choose who gets to unleash it. If you choose Heinrich, he turns into a hulking minotaur that can dish out a huge amount of damage in a short time. If you choose Gretchen, she immediately makes all (or almost all) of your foes vanish from the screen. Well, not quite immediately. First, your enemies are transported to a formless blue realm. Then, they are struck down by a giant blue naked Gretchen. Her action might be simple, like closing her fist on the enemies in the palm of her hand, or it might be more provocative, like crushing the enemies positioned on her knee by crossing her leg a la Basic Instinct. There's an array of poses that big blue Gretchen can strike, but almost all of them involve a degree of nudity that, while not quite explicit, certainly is immodest.

Despite her formidable magical talents, Gretchen is vulnerable to enemy attacks. You have to keep an eye on her health because if she dies, it's game over. You can summon her into your arms and run around while carrying her, a move that increases health regeneration for both characters. If you stray too far from her or she gets restrained by an enemy, you won't be able to use magic until you rectify the situation. Some enemies and environments represent more of a threat to Gretchen than others, but for the most part, keeping her alive is a manageable task despite her occasional AI miscues. Keeping Heinrich healthy is important too, but even if you are killed and your body parts splattered across the floor, a brief stint of button mashing will put him back together again. Gretchen is extra vulnerable during this time, however, so it's best to stay in one piece.

Combat in Knights Contract heightens to a fevered pitch during the impressive boss fights. The character designs for these fearsome foes are a visual highlight, from the sinewy three-legged creature with too many eyeballs and teeth to the towering purple ogre in steel bondage gear. Learning their patterns, dodging their attacks, and striking back at them can be very engaging, but keeping Gretchen alive can be seriously difficult. Bosses can kill her with just a few hits, so you often have to spend time running around carrying her instead of attacking. While this may be part of the challenge, some bosses take things too far, resulting in a lot of cheap deaths. The worst offender is a fiery warrior witch that creates pools of lava, and Gretchen can't seem to get herself out of them. You can't pick her up because then you will catch fire and she will jump out of your arms, usually back into the fire. This boss also dishes out some knockdown attacks that can send you flying out of the small arena to your death. In another boss fight, you can follow a prompt to jump up onto the boss's massive body, but this can often result in you inexplicably jumping to your doom. Similar environmental problems and overly perilous attacks sometimes appear in normal combat, but they are manageable irritations. In boss fights, they are infuriating obstacles.

When you finally manage to whittle down the boss's health far enough, you are confronted with an extremely unforgiving sequence of quick-time events. The window of time you have to respond to a given onscreen prompt is very, very small, and nothing but the fastest twitch reflexes will cut it. If you fail just one press, the boss regains some health and you have to resume normal combat. These sequences often contain five or more presses, each one equally strict. While you are tensely waiting for the next press, Heinrich and Gretchen are teaming up in cool ways to put the finishing blows on the boss, but you can hardly appreciate it because your eyes are fixed to the prompt location. The only consolation is that the presses follow the same sequence every time, so you can eventually memorize them and hit them the instant they appear. The boss fights in Knights Contract are some of the most climactic and exciting encounters in the game, but the incredibly difficult quick-time events add a lot of frustration and aggravation.

Your adventure proceeds at a good pace for the first half of the game, but then you enter levels that feel like detours and the game loses some momentum. There is still satisfying combat and nice environmental design touches to be found in these parts, however. Fleshy homunculi splatter pleasantly when you hit them with a finisher, and earlier levels are reskinned with a great fire-scorched look accentuated by gently floating ash. Still, a reskinned level isn't as exciting as a new level, and some of the new ones feel too mazelike for their own good. Some novel twists mix things up for a level or two, and this helps keep you interested. Yet Heinrich isn't exactly a speed demon, and his loping jog starts to feel like a plodding schlep when you have to backtrack frequently. Knights Contract can keep you busy for a good long while, but the uneven pace can also weaken your motivation to press forward.

With erratic pacing and often-aggravating boss fights, Knights Contract doesn't always feel like a worthwhile adventure. Yet though the flashy combat isn't very complex, it's fun to wield your deadly weapon and powerful magic spells in brutal tandem. The problematic gameplay elements can dampen this fun, but the stylish artistic design and interesting story help counterbalance these issues. Knights Contract isn't a game for those without the patience to push through some trying times, but those who persevere will find some savage satisfaction. 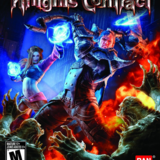