Kirby might not carry quite the same level of prestige as Nintendo's most famous platforming mascot, but you'd be hard pressed to find a reason why in Kirby: Triple Deluxe. It's as inventive as platformers come, unashamedly making use of just about every piece of 3D trickery around to craft some wildly unique, colorful, and thoroughly masterful levels. More impressive is how Triple Deluxe makes such trickery seem absolutely effortless: there are some very clever moments here, but they never come at the expense of solid platforming.

It helps that you're introduced to Triple Deluxe's 3D charms gradually. Early levels are standard Kirby fare, where you leap around smashing star boxes and generally making life miserable for your enemies by swallowing them whole and spitting them out again at their buddies. Things happening in the background offer hints at what's to come--you see monsters taking a stroll, some star boxes to smash--but these things are kept tantalizingly out of reach for the moment.

Eventually, floating stars transport you to those background layers, letting you gobble up enemies with wild abandon before making a safe return to the familiar foreground. It's simple stuff to begin with, but everything is intelligently designed to guide you from one 3D concept to the next, and all without a help box in sight. Before you know it, there are enemies flying in from the background to the foreground, cannons that shoot you deep into the back of a level, and giant hands that squash you right up against the screen.

New ideas and challenges fly in thick and fast, but are so well implemented that they rarely overwhelm you. One moment you're using the 3DS's motion controls to blast a rocket at a distant set of otherwise insurmountable blocks and using a star to travel to the background and grab some goodies, and the next, you're traversing a ghost world, where the enemies and platforms only appear on a mirror image in the background. Brilliant boss battles pit you against a tree that uproots and leaps into the background, firing fruit and slapping you around with lethal tendrils, or find you taking on a mischievous paintbrush that lays thick splashes of paint across the screen to hide behind.

This is one of the few 3DS games that really makes use of the handheld's 3D screen. You can play with the 3D off, with shadows and blurring helping to define what is and isn't in the foreground, but having the 3D on helps massively in navigating the intricate levels and gives an amusing squashed Kirby some visual pop. It helps with figuring out some of the puzzles too. Many of them make use of power-ups, which Kirby acquires by swallowing certain enemies. Land a fire power-up, and you can blow flames at enemies and set fuses alight. These fuses are spread out over blocks that you move by tilting the 3DS, with careful alignment required to get the flame to the end, and launch Kirby out of a cannon with a satisfying pop.

Even outside of puzzles, the power-ups bring much amusement thanks to the impressive level of detail that has gone into each and every one. Circus Kirby bounces across the screen with all the elegance of a clown; Beetle Kirby viciously skewers enemies on his horn; and sword-sporting Kirby takes mighty swipes at the opposition, all while dressed up as a puffy pink version of Link. Selected levels unleash a neon blast of Kirby's rainbow-colored hypernova ability, which lets him vacuum up nigh on everything that's onscreen, and shift around large objects that would otherwise be immovable. Puzzles have him bringing snowmen back to life by dragging their heads back to their torsos, or sucking up rockets from towering silos and spitting them back at their supports. None of the puzzles are especially challenging, but such are the aesthetic charms on show as you solve them that it's hard to be disappointed.

Indeed, Triple Deluxe's levels feature some of the prettiest visuals on the 3DS, with a striking color palette to gawk at and the always-cute Kirby and his vast array of adorable facial expressions to fall in love with. It's a gorgeous game, but its levels are also superbly balanced and expertly crafted, while being as imaginative as anything to come from the platforming benchmark that is the Mario series. Not only that, but it feels fresh and exciting. Sure, some of its 3D ideas may have been attempted before, but they've never felt as complete as they do here.

The game is stuffed with content too. There are secrets to be found on every level, stars to collect, and an amusing rhythm-based minigame and multiplayer fighting game to dig into. You even have the option of going back and playing the game again as the mallet-smashing King Dedede, complete with remixed levels and bosses, and it's a tempting proposition when the platforming is this good. Triple Deluxe is an absolute diamond of a game, and cements Kirby's place as nothing less than a bone fide platforming superstar.

View Comments (104)
Back To Top
8
Great
About GameSpot Reviews 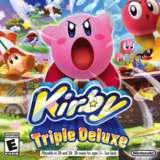 Mark's all-time favorite genre is the platformer, having spent many an hour with the likes of Super Mario, Rayman, and Kirby. He played all the way through to the end of Triple Deluxe for this review, and is currently working his way through a second time as King Dedede.