Of all the Nintendo mascotlike characters, Kirby has always gotten the least respect. The little puffball broke into the business doing platform games, but his ball-like character has been exploited several times to bring a little more personality to pinball, golf, and a Breakout clone. Kirby's uncanny ability to roll around like a ball and the game's built-in tilt sensor are the main features in the latest Kirby GBC game, Kirby Tilt 'n' Tumble.

Tilt 'n' Tumble plays from the top-down perspective. The object of each level is to roll Kirby all the way to the end of the level. Along the way, you'll launch Kirby out of cannons, land him on floating cloud platforms, and race against the clock. Each world ends in a boss fight, which is usually handled by launching Kirby through the air and causing him to land on your foe. The game also has collectable stars, which earn you extra lives and several hidden minigames. Most of the standard Kirby foes are represented here, but the old Kirby standby--inhaling your enemies to steal their powers--is nowhere to be found.

What makes Tilt 'n' Tumble interesting is its built-in tilt sensor. Rather than use the D-pad to control Kirby, you simply tilt your Game Boy around to make Kirby roll. Jerking your GB quickly will cause Kirby to jump. This gives you incredibly fine analog control over Kirby's speed and direction. The downside of this is that you really have to hold your Game Boy flat to play the game--which means you're hovering over your Game Boy, blocking out most overhead lighting. While it's possible to calibrate the sensor to play the game upright, it never really seems to work quite as well as when you hold your Game Boy flat.

Tilt 'n' Tumble looks pretty good for a Game Boy Color game, and the game is drawn in the same cartoony style that the rest of the Kirby games have used. The game has good music and effects, but the game's little bits of speech, from the game name spoken at the title screen to the little yelp every time Kirby jumps, can get really annoying after only a couple of levels.

Yes, Kirby Tilt 'n' Tumble is a gimmicky game, but it's a gimmicky game done well. Controlling Kirby with the tilt sensor is a lot of fun, and it constantly makes you keep track of just how far you're tilting the Game Boy in relation to Kirby's momentum. While the game isn't especially difficult once you've taken the time to get comfortable with the control, it's a fun ride with lots of little diversions to keep the gameplay fresh throughout. 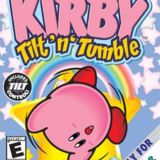 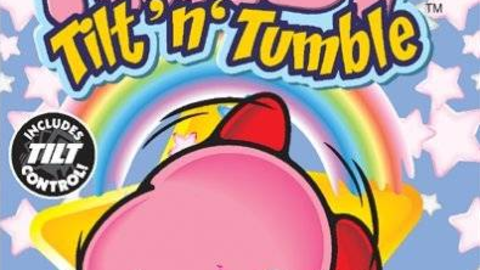