Kirby games are guaranteed to have a perky pink mascot, candy-coated platforming levels, and plentiful power-ups to wield and combine; all key pieces of Kirby Star Allies. But what sets the latest game apart from previous Kirby adventures is that everything is designed with co-op in mind, whether you have friends to play with or not. It's a welcome change that keeps the otherwise traditional gameplay fresh, and even though the extra help is overkill for most of the challenges that lie in wait, Star Allies still puts your cheerful chums to good use.

You've been able to team up in previous games, like Kirby's Return to Dream Land on Wii, but it's fundamental to Star Allies and far more flexible in practice. Rather than being limited to only playing alongside key characters like Meta Knight or King Dedede, you can now recruit almost any enemy you come across. And after you unlock a pair of extra modes upon completing the story, you earn the right to play as any character in the game in a speedrun mode. It's not a massive twist given that enemies play the same as Kirby does when he's absorbed their powers, but for a game built around its variety of personalities, it's an appreciated bonus to look forward to.

Star Allies perfectly executes its playful cartoon aesthetic from start to finish, stuffed with adorable animations and digital glitter. Meanwhile, the soundtrack swings from uplifting jingles to intense battle themes, providing ample motivation and entertainment, and is up there with the series' best works--many of which have been expertly remixed here. And now that you can team up with allies in unique ways--say, when you have a chef power-up and pretend-cook your friends in a pot to produce life-giving snacks--Star Allies is just relentlessly charismatic.

The story mode paces itself well, in part because it's so short. The procession of new ideas from one stage to the next keeps you wondering what clever platforming obstacle or power-up will appear next. These surprises may force your team to split up to tackle simple, large-scale puzzles, a feat the AI handles effortlessly without your input. You also occasionally group together to roll downhill as a wall-smashing wheel, hop on the back of a flying star for some casual side-scrolling shooter action, or line up to form a train and steamroll through enemies.

Reaching the end of a level or world is generally very easy. The only real challenge is to locate hidden items--puzzle pieces that are used to complete pictures, not unlike the 3DS StreetPass game, Puzzle Swap. Each stage has a unique pink piece, though you can regularly find randomized blue pieces or tap amiibo to generate them on the fly. The pictures you unlock are just that--pictures--which is a little deflating, as far as rewards go.

But rare levels contain hidden rooms with a switch that unlocks a new stage in the overworld. You're told when a stage contains a hidden opportunity, so the trick is to simply keep an eye out for suspicious-looking objects or doors during your travels. On some occasions an obstacle or object requires you to interact while using a specific ability (such as electrifying a power line or igniting a pile of leaves). Never one to make you suffer, enemies with the relevant power-ups are generally placed nearby so you won't ever feel totally unprepared.

Strolling through the story mode ensures a generous amount of expertly crafted whimsy and joy, but because levels are so easygoing, with lightweight platforming and a trio of friends watching your back at all times, Star Allies' campaign quickly runs out of steam. It's almost a good problem to have--a game that's so good that you don't want it to end--but it's tough to shake the disappointment when you cross the finish line.

The unlockable extra modes, then, are the game's saving grace. Nevermind the wood-chopping and meteor-batting mini-games, which are cute but undeniably shallow; the boss rush and speedrun modes are the main attractions. For the speedrun mode, Guest Star, you charge through five sets of levels as the Star Allies character of your choosing. These are the same stages you've played before, but the further you get, the faster, stronger, and more resilient you become. Your gradual growth, robust set of actions per character, and the race against time inject Star Allies with the energy to match its overflowing personality.

And to account for the lack of difficulty elsewhere, the boss rush mode (The Ultimate Choice) can be dialed up to unforgiving levels, where enemies hit harder, health replenishments are in shorter supply, and more bosses line up to battle. Both this and the speedrun mode can be enjoyed with a total of four players, which feels more beneficial compared to the pushover story mode.

Star Allies is yet another Kirby game, but it's up there with some of the best. It's an artistic showcase, and a great opportunity for co-op platforming. The one real complaint you can levy at it is that it gates off its more challenging aspects, but the fact that they are present to begin with will please anyone who's grown weary of the series' painless platforming.

View Comments (131)
Back To Top
8
Great
About GameSpot Reviews 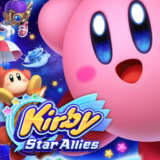 Peter breezed through story mode in about five hours, walking away with over 100 extra lives. Another couple hours were spent cleaning up puzzle pieces, and in the speedrun and boss rush modes. Nintendo provided GameSpot with a complimentary copy of the game for review.