Creativity and innovation make this touch-centric Kirby adventure a must-play.

One of the great things about the Kirby series is that over the years, it has stuck to its adorable roots with such an upbeat vibe and familiar presentation while trying out new gameplay mechanics to keep things fresh. Kirby: Mass Attack continues that forward trend. This touch-only adventure stars not just one but a whole gaggle of the lovable pink puffs that must be herded through colorful stages in creative ways. Tight controls mingle with a steady stream of clever new ideas to make this one of Kirby's best handheld outings.

The game's effervescent plot thickens when Kirby's latest nemesis, the evil skull-lord Necrodeus, blasts the poor fellow into 10 tiny versions of himself in hopes of eradicating the pink hero once and for all. His plan almost works, but one remaining wayward Kirby manages to escape. Setting out to rally the troops and defeat Necrodeus by piecing himself back together, the last Kirby must rely on his mini-pals for support. This cute story gimmick translates into some excellent strategic platforming and puzzle-solving. Beefing up and maintaining your small pink army is integral to the gameplay, and the unique ways that you have to put the little guys to use from one level to the next keep the adventure from stagnating. The numerous stages across Mass Attack's five worlds also require you to have a certain number of Kirbys in your group to proceed--secret areas within every stage are accessed in much the same way. You gain more of your comrades as you go by collecting fruit to fill a score meter, but your herd can be whittled down if any perish permanently within a given stage. It's a cool dynamic that encourages backtracking and exploring because any Kirbys you collect will stay with you within a given world as long as you don't let them die off.

Mass Attack's intuitive touch-centric controls are fun to use and make the challenging task of micromanaging a herd of energetic little blobs easier than you might expect. You can move your group by tapping and dragging it around the screen; it's also possible to grab them all and float them along a drawn path in short bursts as in Kirby: Canvas Curse. Double-tapping foes sends your mob charging forward to dog pile onto them, or you can fling individual Kirbys around to grab items, latch onto foes, and hit switches. It's a comfortable system that works surprisingly well once you've had a little practice, and you won't find yourself missing traditional button controls much. That's not to say things don't go awry at times. Some Kirbys occasionally wander away from the pack and get into trouble, but this can be overcome with a touch of vigilance. If one of your pals perishes, there's still some hope. Members of your gang can be hit once, which turns them blue. If they're hit again, they turn into fluttering ghosts that can be recollected and saved if you grab them with another living Kirby before they get away.

Though Kirby's ability-copying powers are absent in this adventure, there's a still a ton of variety in the gameplay and puzzles. Mob mechanics are put to good use: You have to split up your Kirbys at times to take branching paths, use them to weigh down platforms, divert them to multiple foes, and put them through obstacles that require some elbow grease. Charming stage designs change up the pace at regular intervals. At various points, you may pile into a thundering tank and shoot your pals as ammo, use your collective weight to steer a hot-air balloon through dangerous obstacles, and climb through a tipsy tree trunk perched precariously by your shifting weight. That's not even considering the crazy boss battles scattered through the bubbly landscape. Each fresh encounter is wildly different from the last. Mass Attack rarely settles on a single routine for long, yet it never feels disjointed. That's a big part of what keeps the fun flowing.

Collecting items and unlocking goodies have always been a staple in the Kirby series, and Mass Attack is bursting at the seams with these extras. Progressing through the main game offers a reasonable difficulty level, but completionists will relish the added challenge and replay value of going back to earn neat in-game achievements and tracking down all of the coins. A few of the many unlockable Kirby-themed minigames also offer nice surprises because they are so complete. Strato Patrol EOS is a fun, competent shooter; the pinball game is solid; and the role-playing game battler yields a pleasant diversion.

Mass Attack doesn't stray from the colorful, kid-friendly presentation and syrupy sweet platforming that the Kirby franchise is known for, but substantial innovation in the way you play it sets the game apart from its predecessors. The stylus-only controls are a welcome addition, and a terrific balance of familiarity and freshness is what makes this buoyant experience so addictive. 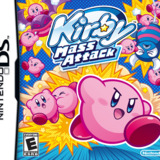 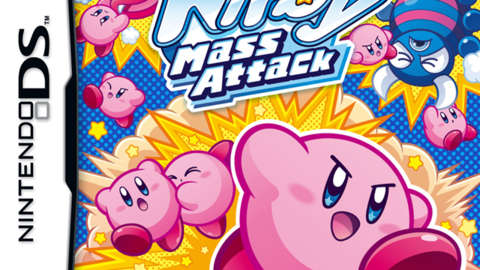 You must help Kirby return to his original form in Kirby Mass Attack, because an evildoer has split Kirby into 10 different pieces.