Canvas Curse couldn't really be done on any other platform, yet it doesn't sacrifice its gameplay for the sake of short-lived gimmicks.

Three months ago, Nintendo released a DS game called Yoshi Touch & Go, in which you had to draw lines on the screen for Yoshi to walk on. It was a really clever concept, but the concept wore thin because there just wasn't a whole lot to the game. Now, just three months later, Nintendo has gotten it right. Kirby Canvas Curse takes the concept--drawing lines to create pathways, bridges, ramps, and the like--and completes it, delivering a full game that feels fresh and has a lot to it. It features a fun, interesting use of the touch screen, and it also does justice to the Kirby legacy. He's not as famous as Mario, Link, and Samus, but Kirby's starred in plenty of surprisingly great games, such as this one.

There are no D pad or button controls in Canvas Curse; you only use the stylus. In the game, Kirby is placed in ball form, and he rolls around. Your only direct control over Kirby is accomplished by tapping him. If he's in regular Kirby form, this causes him to perform a dash attack. If Kirby has any copy abilities, tapping him will perform a special move specific to the enemy he's copied. This lets you take on some cool skills, like the ability to turn into a rocket to fly in any direction, or a tire that quickly moves along the ground and smashes anything in its path.

But your main interaction with the game exists through indirectly controlling Kirby using ink to draw rainbow-colored lines. These lines have a few different purposes. You can draw walls to change Kirby's direction. You can draw pathways or bridges to get Kirby from place to place. And you can also use rainbow walls to block attacks from objects, like laser beams and cannons. Overall, your control over Kirby and the environment is a satisfying part of the gameplay that, despite a few similarities to that Yoshi game, still feels unique and innovative, though some may find it to be a little too simple for their tastes.

Canvas Curse is broken up into a handful of different worlds, each with three levels, and each with its own look. You'll roll through machine worlds, head underwater, blow through the obligatory ice world, avoid lava in the equally obligatory fire area, and so on. At the end of each world, you'll take on a boss, but which boss you face is up to you. You're given a choice of three different boss fights. Each world gives you the same three choices, but the fights get more difficult as you choose them. So if you stick to one type of encounter, it gets much tougher as you move forward. One boss fight has a sort of bounce-around, pinball-like motif. Another presents a race in which you grab fruit for speed boosts. The third features a tracing contest where you have to draw specific shapes on the screen to come out ahead. Each is interesting in its own way, though with only three to choose from, they do get a little repetitive over time.

Outside of the main game, there are a few more options to choose from. Rainbow run lets you replay segments of levels you've passed in the main game with different challenges. Beating these timed or line-based challenges earns you medals, which can be spent on items in a shop. Through this process, you'll unlock a variety of items, like songs for the song test, or more meaningful stuff, like another notch for your life meter or new ink colors. Noticeable by its omission is support for any kind of multiplayer. The concept seems like it could be adapted for either cooperative or competitive play, but unless you're interested in competing for faster time-attack scores, the game is strictly solo. But with plenty to do already, and even more if you get into trying to collect every single medal possible and unlocking all the additional modes and characters, Canvas Curse is a great value.

Graphically, the game has the same sort of bright, colorful look that you'd expect from an entry in the Kirby series. Additionally, each level has a specific look that makes it stand out, and enemies are just as lively as Kirby himself. It's a great-looking game. The audio is equally as good. The music is upbeat and adds to the overall character, and the sound effects also fit with the action just fine.

All in all, Kirby Canvas Curse does a lot of what you want a Nintendo DS game to do. And it couldn't really be done on any other platform, yet it doesn't sacrifice its gameplay for the sake of short-lived gimmicks. So if you're in the hunt for a new DS game, Kirby Canvas Curse is a great choice. 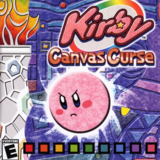