On paper, the idea seems just a little bit too fantastic to actually work: take a handful of Disney characters and worlds, mix them with some Final Fantasy heroes and a brand-new universe, infuse everything with light role-playing game elements, and hope for the best. It takes little imagination to envision such a formula producing any number of disappointing outcomes, but instead, the idea was realized as Kingdom Hearts and went on to become a beloved and popular franchise. Now, years after that initial triumph, Kingdom Hearts HD 1.5 Remix is a good reminder of the series' great joys and occasional frustrations.

Though it's not entirely clear from the title, Kingdom Hearts HD 1.5 Remix is a compilation of two separate games in the franchise (the Final Mix versions of Kingdom Hearts and Kingdom Hearts Re: Chain of Memories), and a semi-interactive retelling of a third (Kingdom Hearts 358/2 Days). Kingdom Hearts Final Mix is the gem in the compilation's crown, the game most likely to entice returning fans to take the fresh plunge and the starting point for any new arrivals. It introduces the hero, a young boy named Sora who lives on an island and regularly meets with friends Riku and Kairi for adventures. The members of that happy trio long to leave their peaceful tropical home in search of adventure, and one day they get their wish. Nothing goes as planned, though, and their friendship is inevitably tested as they are forced to make their way through a universe full of memorable new allies and scheming villains from various Disney films.

If you're familiar with the original release of Kingdom Hearts in North America, you'll discover that there are subtle changes to the Final Mix presentation, including new weapons and different item locations. In spite of those modifications, the game plays largely as it did in the past, which is a great blessing and an occasional curse. Sora and friends often wander through interconnected and mostly barren environments, talking to various characters and frequently battling a few of the same enemy mobs on their way to trigger another cutscene so that they can backtrack and keep the story moving. Along the way, an uncooperative camera likes to get hung up on the architecture, and there are occasional platforming sections that seem to have been designed with tighter controls in mind. The latter issue is eventually alleviated once Sora gains new abilities that improve his agility, but such annoyances put a damper on the action..

It's relatively easy to tolerate occasional tedium because there is always something unexpected but delightfully familiar around the next turn to make up for it. For instance, you are greeted upon arrival in Wonderland by a scene in which the frantic White Rabbit rushes off to his audience with the Queen of Hearts. The events that follow that introduction largely mimic those seen in the classic animated feature Alice in Wonderland, and as you visit more such worlds, you influence the outcome of well-known stories and witness key characters in a new light. There's also a satisfying character progression system that lets you equip favored abilities, and whaling away on enemies with your keyblade is cathartic once you get used to monitoring Sora and his companions all at once.

Over time, the graphical impact the original releases once had has faded, but Kingdom Hearts HD 1.5 Remix applies a fresh coat of paint with modest success. Environments are still rather barren, but the backdrops are usually presented sharply, and the character models and action are animated beautifully. Presentation isn't entirely consistent, and some areas look more spectacular than others, but Remix doesn't feel antiquated, and the widescreen aspect ratio makes it easier to follow the combat.

Re:Chain of Memories, for its part, has gained the most compared to its original release. Square Enix at one point reworked the Game Boy Advance game for the PlayStation 2, and now that edition has been further tweaked. Many of the art assets from Final Mix are thus reused, and the story elements are similar (because Sora is now working his way through memories of his previous time spent in those worlds). If you've just played through Final Mix, jumping into its successor feels overly familiar, though combat and exploration are given a boost. Instead of simply running around and striking foes with his keyblade, Sora must activate cards from a deck he has built.

There's a lot of depth to the system, since you can form combos (at the risk of temporarily losing access to the first card in a series of three) and must consider placement of cards outside of battle. The process of navigating the world is also different. You connect rooms by placing expendable cards and often can determine what you find on the other side of a door. For instance, you might lay out a card that causes the ensuing area to be full of drowsy foes, or treasure. Though the new system is intimidating and awkward initially, the deck building eventually becomes more enthralling than anything featured in Final Mix.

The final game in the compilation, Kingdom Hearts 358/2 Days, is presented only in a viewing mode. Instead of participating in an interactive fashion, you watch reworked cutscenes stitched together using art stills and brief text summaries. It's primarily an exercise in listening to dialogue as characters sit around eating ice cream on a clock tower, and the star of the story is now Roxas, an important figure who appears in Kingdom Hearts II. The story's structure works well to expand the Kingdom Hearts mythology beyond its apparent boundaries, though the lack of action leads to waning interest.

Kingdom Hearts HD 1.5 Remix presents a couple of the earliest games in the beloved series in their best light and makes a revealing cinematic experience out of a third one. The three experiences complement one another with unique elements and welcome context that is a treat for longtime fans and newcomers alike; plus, there's enough variety to keep everyone engaged for the 50 or 60 hours it can easily take to absorb everything. There was a time when the mixture of Disney and Final Fantasy characters felt magical, and this new compilation capably proves that the magic has not yet dissipated. 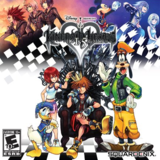 Jason Venter has finished hundreds of video games since discovering the hobby in the late '80s, and he hopes to play and write about hundreds more before they bury him.