This game undeniably caters to existing fans of Kingdom Hearts, and those people will get the most out of Chain of Memories.

What made the original Kingdom Hearts for the PlayStation 2 so endearing was not so much its action gameplay, but more the fascinating world it created using Final Fantasy and Disney characters. In a lot of ways, the same can be said for Kingdom Hearts: Chain of Memories. While the real-time card-battling system has its issues and the exploration elements cross a lot of familiar ground, Chain of Memories still creates an interesting place where Disney worlds and Final Fantasy cameo appearances work together well. This game is clearly aimed at hooking existing fans of the developing Kingdom Hearts series, and those fans will get the most value out of Chain of Memories.

The fan focus is evident right off the bat, as Chain of Memories picks up immediately where the original Kingdom Hearts left off. Our spiky-haired protagonist, Sora, is wandering a land of open fields together with his fast companions, Donald Duck and Goofy. They end up drawn to the gates of a great castle, where they are confronted by an enigmatic robed and cowled figure speaking in riddles. It turns out that the trio has become trapped in a place called Castle Oblivion, where simple cards adopt special properties. It's evident that nefarious business is afoot, but the band of heroes has no choice but to explore the castle in an effort to find King Mickey and Sora's friend Riku. And there's an added twist: The worlds you'll visit and the familiar characters you'll meet are all drawn from Sora's memories. His memory is being manipulated by a group known as the Organization, a clan of mysterious folk that seems to be intent on guiding Sora and his friends to accomplish some dark purpose. The events in this game are meant to tie together the stories from the original Kingdom Hearts and its eventual PlayStation 2 sequel, making it a Kingdom Hearts 1.5 of sorts.

You'll be controlling Sora alone on his adventure, because whenever he enters a new world by means of a set of special cards, Goofy and Donald are separated from him. Moving from floor to floor in Castle Oblivion is accomplished by clearing the various worlds, which are essentially the same Disney worlds you might have visited in Kingdom Hearts. The desert city of Agrabah from Aladdin is here, as well as ghostly Halloween Town from The Nightmare Before Christmas, Winnie the Pooh's sleepy 100 Acre Wood, and more. You won't be visiting any new Disney locations or very many original areas, which might be disappointing for those who hoped for new places to explore. The worlds are all segmented into a series of small, interconnected rooms. You move from room to room by unlocking doors with cards that you'll find in the field, pick up from enemies, or gain from special encounters or events. You can jump and swing your keyblade in the field; your blade can strike objects to open them, allow you to interact with doors, or let you hit an enemy for an initiative attack. The rooms are typically filled with foes (called the Heartless) that will roam the area, and while you can avoid them if you wish, getting the first attack nets you a good battle advantage.

Combat features both action elements as well as the card-battling aspect. When you first begin your enemy encounters, you'll be dropped into a fixed battle area where you'll be able to run back and forth, jump, and roll to maneuver around monsters. Any action you take, however, is governed by the cards in your current deck, which are arranged in a set order (by you, outside of battle) and appear at the bottom left of your screen. You'll be able to see four cards in your hand at any one time, and different cards are used for melee attacks, magic spells, items, and summoned characters. You usually play the cards one at a time, though you can group more for a combo attack. Each card has a number on it, from zero to nine. Your enemies will also use cards to attack, so the trick here is that when you match cards with enemies, the largest value attack will come out on top. For example, if you use an eight card against an enemy that uses a five card, the enemy will stagger and you'll successfully strike them. Zero cards are special in that, if you use them after an enemy has started its attack, the card will negate that attack. Once you've run out of cards, you can reshuffle your deck and start right over again. The more you have to shuffle your deck, the longer it will take each time you have to do it. You'll also be vulnerable while you're shuffling.

This would seem to suggest a certain amount of tactical depth, but all it really amounts to is that you'll want to stack your deck with high-numbered cards and a handful of zero cards in case you get in a jam. Trying to match specific enemy attacks with specific cards means you'll be trying to hit the shoulder buttons to cycle through your deck as you look for the right card to play while you're also running around trying to avoid getting hit. This can get tedious and frustrating, particularly when the enemies are becoming tougher and your deck may not be very robust. Plus, you can get several attacks thrown back in your face by cards you never saw coming. The battle system also seems very geared to the flow of the previous Kingdom Hearts, in that you keep feeling like you should be able to just run up to foes and start whacking them with your keyblade. The card system is an interesting experiment, but it can be awkward in practice, especially against some of the bosses you'll face.

As mentioned before, you can use a number of cards at once in a combo, but this comes with a price, which is that you'll lose the first card you played in that combo for the remainder of the battle. So if you keep using combo attacks, you'll keep bleeding cards, and you can be left with a very small deck. The thing is that many of the bosses in the game use devastating combo effects repeatedly, and then the obvious happens: They just plain run out of cards. So even the toughest battles, if you wait them out, become ridiculously easy when the boss has used all but a bare handful of cards and is repeatedly reshuffling them. Granted, not all bosses do this, but it just doesn't seem right (or satisfying) when a character like Cloud is reduced to slashing his sword twice and then standing in place for three seconds while he waits for new cards.

But even when Cloud has to stand in place, at least he looks great. The character sprites in Chain of Memories are large, detailed, and possessed of a nice range of animations. All the characters in the game seem like they belong, from Donald, Goofy and their Disney cousins down to the Final Fantasy crew (and the members of the Organization, which are very much cut from the Final Fantasy spiky-haired cloth). There are even some full-motion 3D sequences in the game, which add some nice variety to the visuals. The Disney worlds you'll explore are all very distinct and good looking despite their relatively small size. And the boss fights in the game will at the very least look impressive, even if the fight itself has become protracted.

The soundtrack for the game is peppered with many tunes that Kingdom Hearts and Disney fans will already find familiar from that game and the animated films. Many of the themes from the original game make their way into this one, and they still sound great and handle the transition well. Though there isn't any conversational speech in the game, there are short voice clips and effects in battle sequences, and those come through clearly and add a lot to the battle atmosphere. Spell, item, and even melee sound effects all have their own unique qualities as well (which is helpful in chaotic battles where you can't watch every card as it's played), and they round out the sound package well.

Kingdom Hearts: Chain of Memories actually has two gameplay campaigns. You can play through the main story with Sora, and then a scenario with a second character opens once you've finished the first. Playing through both will give you a fuller picture of the story and the unfolding events, though those events might not make a whole lot of sense to Kingdom Hearts neophytes. This game undeniably caters to existing fans of the series, and those people will get the most out of Chain of Memories. For everyone else, it's worth checking out if you enjoy Disney, Final Fantasy, or a basically good adventure game with a unique world and premise. 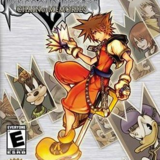