This prequel is another fun and pleasant mash-up of Final Fantasy sensibilities and Disney tales.

Kingdom Hearts fans have spent quality time with Sora and Roxas; now they can add three new characters to the list: Ventus, Terra, and Aqua. These close friends are the protagonists in the newest entry in the series, Birth by Sleep, and you play as all three of them on your way to unraveling mysteries that shed new light on the events of the original Kingdom Hearts. Yet while the playable characters may be different, Kingdom Hearts: Birth by Sleep treads familiar ground. You piece together an overarching story with themes of friendship, light versus dark, and true identity all while exploring colorful Disney-themed worlds and interacting with classic Disney characters. This intriguing Square/Disney mixture has served the series well, as have great boss fights and flashy keyblade action. This prequel inherits those assets but also some of the awkwardness that has plagued previous games. The platforming is a bit clumsy, and the camera and lock-on system can both lead to awkward moments. The game's structure also leads to some repetition. You explore many of the same areas, fight many of the same enemies, and view some of the same cutscenes three times over, which might make you wish Birth by Sleep featured the never-ending parade of cameos and Disney worlds of the console games. But mechanical flaws and occasional tedium aside, both series fans and newcomers will feel at home with this good, fun third-person adventure.

An opening cutscene introduces you to Birth by Sleep's three main adventurers, and you must decide which you wish to play as first. Eventually, you repeat this step twice more and explore the developing tale from three angles so that you can reveal every truth the game harbors. The overarching story has all the hallmarks of a brooding Square/Enix story--internal struggles, strained friendships, battles between good-hearted heroes and menacing villains. In the midst of all this drama are charming Disney vignettes that see you experiencing familiar tales from a unique perspective. You fight alongside Prince Charming, protect Snow White from attacking fiends, and see the dark side of the infamous mirror, mirror on the wall, among many other scenarios. As these three characters, you witness some of the same scenes, venture down many of the same corridors (which feature the same enemy attack patterns each time), and even repeat a boss fight or two using the same tactics. The repetition is part and parcel of Birth by Sleep's structure, but you will eventually long for more environmental and storytelling variety.

Nonetheless, there are still plenty of character-specific tasks on each of the three play-throughs. You fight (mostly) different bosses and cross paths with Disney characters at different points during their own tales, occasionally meeting up with one or both of the other leading players before once again departing on your own personal journey. Time spent with Ventus and Aqua is largely rewarding. The young and energetic Ventus is well meaning enough to be appealing but not so earnest as to be annoying. Aqua is thoughtful and focused, and she provides a mature counterpoint to Ven's gung-ho attitude. Both characters are voiced well; unfortunately, the same can't be said of the brooding Terra. The character struggles with the darkness within him, yet the actor voicing him can't express angst, excitement, sincerity, or any other emotion for which the script calls. Every line sinks like a stone, and the story suffers as a result. Terra's terrible voicing is most noticeable when he shares scenes with Disney characters, mostly because their voices are uniformly excellent and absolutely comparable to the original source.

Fortunately, great care was taken with each familiar environment. A few of them are on the bland side, but most capture the spirit of the film that inspired them. You meet Snow White in a field drenched in sunlight; Cinderella's pumpkin carriage is as magical as you remember. Every character looks perfectly parallel to the animated forms that graced the silver screen, so you immediately understand and empathize with them. Birth by Sleep is a great-looking game, though the bright and attractive visuals come with some caveats. Most notably, the long load times are a real drag, even if you select the full install option from the main menu. The frame rate also takes the occasional dip, usually after one of the lengthy loading screens, though one dungeon battle suffers from major, uncomfortable slowdown throughout. The audio is occasionally annoying (the siren that signals low health is one such nuisance), but Kingdom Hearts and Disney fans alike will enjoy hearing some familiar tunes as they hop from one world to the next. It's unfortunate that some of the musical loops are so short and repeat so often; you may never want to hear "Bibbidi-Bobbidi-Boo" for the remainder of your days.

Luckily, while the combat does veer toward the button-mashing side, it's fun, looks fantastic, and evolves in meaningful ways as you play. Armed with a keyblade, you bash on a variety of enemies called the unversed. Each character feels different; Ventus is quick with his blade, Terra takes a more deliberate approach, and Aqua is agile and acrobatic. The three protagonists begin with a specific and small selection of special skills, but as you level up, you open up new slots for additional abilities. Spells and skills level up as well, and you can combine them to unlock new and more powerful moves. Furthermore, as you develop relationships with various characters, you earn associated dimension links, or d-links, which let you take on the battle style and skills of other characters, including Disney heroes and villains. On standard difficulty, Birth by Sleep isn't so challenging that you'll get much tactical advantage from frequently utilizing d-links, but it's one of many ways to refresh the action if it starts feeling repetitive. Further energizing the combat are the various keyblades you collect; heightened attack modes called command styles; and showy special moves called shotlocks. Battles explode with color, and spells and skills have you twirling about the screen, launching enemies into the air with whirlwinds and smashing them with blades of ice, among many other possibilities. Great animations and a solid sense of impact keep the action lively and entertaining, even when the easier and longer sequences threaten to get tedious.

The combat shines during Birth by Sleep's excellent boss fights, which feature some loathsome fiends that will have you looking at various Disney set pieces in a new light. On standard difficulty, combat isn't normally too challenging, but this game isn't the cakewalk of Kingdom Hearts II. It's fun to adjust to the various patterns of the bosses or perhaps switch to a different set of moves that provides better offensive capabilities. The bosses run the visual and tactical gamut, from ground-pounding behemoths to agile swordsmen, and while a few stand out as too easy or too hard, these battles are great fun. You may run into occasional problems with the camera and lock-on systems, however. The camera can't always keep up with the boss you've targeted--or sometimes even standard enemies. As a result, you may lose your target lock at inopportune moments or find the camera facing your character from across the arena. And as in other Kingdom Hearts games, the camera can still become a nuisance in tighter spaces, though this minor annoyance isn't apt to interfere too often.

Platforming has also been an Achilles heel for the series, and the general awkwardness of the jumping makes a few sections, such as Ventus' fetch quest in Cinderella's abode, more bothersome than boisterous. Happily, there are few such sequences, and there's always a fun boss fight around the corner to make up for these small transgressions. However, there are a few other noncombat activities, with the command board being the best of them. This is a surprisingly complex board game in which you can earn and improve your skills outside of battle. You can play it versus the AI or against another local player, though this isn't the only way to enjoy Birth by Sleep with others. By accessing the mirage arena within the single-player game, you can meet up with local players in ad hoc mode and battle them in Versus mode or take on increasingly difficult waves of unversed cooperatively in Arena mode. Given that competitive play is best with a full contingent of six players, it's a pity that there's no online play, even though the game describes these modes as "online."

Nevertheless, Birth by Sleep's multiplayer is really enjoyable, particularly the cooperative arenas. Teaming up with a buddy or two to take down a towering boss, particularly if the players are at about the same level, is immensely rewarding. Furthermore, you earn medals that you can cash in for new abilities and other goodies, including team-based abilities like group heals. You can even forge d-links with other players, which gives you access to their special moves in battle. A kart racer variant called Rumble Racing rounds out the multiplayer suite, but the controls and physics are so weak that it barely warrants a mention. Unfortunately, it appears as a minigame in the single-player portion, though the other minigames you encounter, such as a cute ice cream-themed rhythm game, are relatively harmless.

Like previous games in the franchise, Kingdom Hearts: Birth by Sleep provides good value for your money. Slashing through all three story strands may take you 25 hours or more, and the command boards and additional modes provide reasons to return once you've left the story behind. It's unfortunate that Birth by Sleep relies so much on repetition and that a few foibles from the series remain largely untouched. These and a few other woes hold this PSP exclusive back from greatness, but vibrant visuals and snazzy, evolving combat will likely charm fans and newcomers alike into forgiving most of the flaws. Birth by Sleep harbors few surprises, but it's a fun and comfortable addition to a quality series.

View Comments (7)
Back To Top
7.5
Good
About GameSpot Reviews 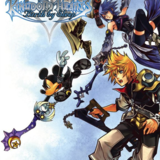