No one can lighten the mood quite like Donald Duck can. The world may be on the brink of destruction, and the boundaries of reality blurred across the time-space continuum, but with a single quack and a well-timed waggle of that feathery tail, it's all forgotten. And therein lies the reason for Kingdom Hearts 3D: Dream Drop Distance's success. For all of its saccharine melodrama, hammy voice acting, and nigh on impenetrable plot points, those little touches of Disney magic--coupled with some fast-paced combat--make this grandiose action role-playing game an endearing and entertaining adventure.

Of course, if you're not a fan of Mickey Mouse and his well-known entourage, then chances are a lot of that Disney charm will be lost on you. Likewise, if you've never played a Kingdom Hearts game before, then the already complex narrative becomes an impenetrable fortress of intertwining plot points. The game does its best to fill you in on the details via a series of flashbacks and essay-like recaps of past games, but with six games and six sprawling narratives to make sense of, only the most hardened of fans are likely to follow it all.

Be prepared to spend most of the game confused then. Sora, a spiky-haired teenager, teams up with Riku, a spiky-haired teenager, to take the Mark of Mastery exam--a test that will turn the pair from mere amateur adventurers into full-blown keyblade masters powerful enough to take on long-serving villain Master Xehanort. You play as both characters throughout the adventure, switching between them in timed intervals known as drops. It's a strange idea, and in practice it's disconcerting to be in the middle of a quest, only to be dragged out of it into an entirely separate one, often forgetting what on earth it is you're supposed to be doing. You can increase the length of your drop with buffs or by fighting enemies, but even then it's only by seconds. It doesn't help that as Sora and Riku are sent to alternate realities of worlds previously destroyed by the villainous Heartless, there's a lot of backtracking and repetition.

Naturally, the Mark of Mastery exam doesn't quite go according to plan, and the pair soon find themselves tangled up in yet another villain's dastardly plot to rule over the world of Kingdom Hearts. Cue nonstop blurry flashbacks, wavy visions of the future, and dialogue worthy of the campiest of B movies, and you've got yourself a plot. To go deeper would be to give too much away, but suffice it to say, it's an ambitious, almost Inception-like tale that gets very complicated very quickly--and not always for the right reasons. You're left in the dark for so long, and characters do so little to explain things throughout your adventure, that when the big reveal comes, you're as confused as you were before--perhaps even more so.

Such complications do little to help you connect with the characters, but they are, on the whole, a likeable bunch of well-meaning, if slightly whiny, teenagers. Well, except for the guy who insists on adding "yo" to the end of every sentence--you'll want to punch him in the face within five seconds of meeting him. Thankfully, he plays only a small part in the proceedings, and it's not long before you leave the first world of Traverse Town to meet the real stars of the show.

They are, of course, the Disney characters. The worlds you visit are themed around familiar and beautifully re-created Disney films, and include classics like Pinocchio, The Hunchback of Notre Dame, and Fantasia, as well as the modern setting of Tron. Within them live the stars of those films, with problems (usually those from the film's plot) that need solving. Whether it's facing off against CLU in the neon surroundings of the Grid or rescuing the ever-beautiful Esmeralda from the fires of Notre Dame, each mission is a nostalgic joy to play through. They're accompanied by some stellar music too, with the pounding strings of Fantasia's The Sorcerer's Apprentice making for one of the most surreal but supremely satisfying pieces of music to do battle to.

And boy is there a lot of battling to be done. Each world is filled with a cavalcade of exotic and insanely cute enemies known as dream eaters that appear randomly as you explore. Some are shaped like lizards that breathe fire; others are shaped like rhinos and dinosaurs that make up for their slowness with devastating physical attacks; while others still are off-the-wall creatures with a penchant for slamming a hefty dose of magic in your face.

They make for a diverse and challenging assortment enemies to battle, particularly when there's a whole lot of them and just one of you. To beat such firepower, you have a bunch of moves at your disposal, ranging from simple physical attacks, through to magic spells and garish combos that are acquired from shops and treasure chests. Each is equipped to a slot in your command deck, and and with a limited number of slots to fill, picking and choosing the right moves is an exercise in strategy.

There's also flowmotion to consider, which lets you bounce off walls and zip around the 3D environment at a frightening pace. Not only is this useful for avoiding attacks, but it also lets you unleash special combos in midair, which don't require a charging period like spells do--the accompanying neon visual flourishes are a treat too. In fact, so good are these combos that a lot of the time it's easy to win battles just by spamming them and not even touching your magic attacks. Only in later, more difficult battles do the other moves really come into play, which is a shame given the variety on offer. While that may be disappointing, flowmotion makes for some super-fast-paced battles as you swoop around the screen in a flash dodging enemy attacks and launching your own.

You're not totally unsupported in battle either, even if you directly control only Sora or Riku. You can create your very own version of dream eaters to fight alongside you by collecting dream pieces from downed enemies, treasure chests, or shops located beside save points. There are recipes to collect too, or you can just randomly combine ingredients and hope for the best. Even if you have a recipe to work from, adjusting the amount of ingredients results in a different outcome, whether that's a higher experience level or different buffs for your character, such as increased strength and magic resistance. It's a neat bit of strategic management that requires some forward planning, lest you use all your ingredients at once and miss out on some killer dream eaters later.

Companions are useful, attacking enemies and healing you, but they do need a bit of love from time to time. A management screen lets you stroke and prod your critters, increasing their affinity with you. This provides different buffs and also rewards you with adorable animations as they leap toward you and lick the screen in appreciation. Their standard skill trees are less visually rewarding but are just as important for making sure your party is ready for battle. Points that you earn during battles can be spent on your critters to unlock new spells and attacks, which prove extremely valuable during later, more difficult battles.

That's especially true for boss battles, which range from the outrageously easy to the excruciatingly difficult. Sometimes, all you need to do is to grind up a few levels. Other times, frustration comes from cheap, one-hit kill moves that bosses spam at you ad nauseam. Aside from hurling your 3DS across the room in a fit of rage, there's little else you can do but plough through it and hopefully luck out and dodge your way to victory. Frantic battles also highlight how awkward it is to switch between spells using the D-pad. If all that stands between you and victory is a quick heal, then having to perform a finger-twisting contortion with your right hand while your left tries desperately to dodge attacks with the circle pad is a hellish experience. The Circle Pad Pro is supported, but this does little more than let you move the camera up and down, rather than side-to-side using the shoulder buttons.

While battling and spending some quality time with the Disney crew make up the bulk of your journey, minigames crop up along the way too. Visit a new world for the first time, and you dive through a vortex of collectible stars and destructible enemies in a fun, on-rails-style shooting section. Enter the Grid in Tron, and you race around on light cycles and hack into enemy turrets by swiping down on the touch screen and highlighting jumbled words to form a command. It's all beautifully done, and breaks up the nonstop action nicely, particularly as Kingdom Hearts 3D offers little in the way of exploration. Most of the time you're ferried along a linear path, and considering the wonderfully animated environments, that's a bit of downer. And don't expect much in the way of side quests either, outside of a card collecting game you can play at certain locations.

Such limitations take the shine off Kingdom Hearts 3D: Dream Drop Distance, particularly when coupled with the labyrinth-like narrative and frustrating boss battles. But just as the Disney characters make you forget the troubles of the world of Kingdom Hearts, so too do they distract from the game's flaws. It's such a delightful experience to visit those classic Disney films and interact with their many loveable characters that you spend more time laughing at them than you do screaming at your 3DS in frustration. No, Disney isn't for everyone, but unless you're laden with a heart of stone, it's hard not to be taken in by Kingdom Hearts 3D's many charms. 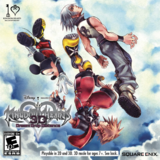 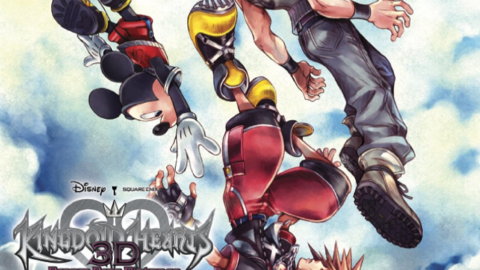 Delve into the Kingdom Hearts world in 3D.