Killzone: Mercenary is a standard but enjoyable shooter and one of the best-looking games on the Vita.

Viewed purely in comparison to other handheld shooters, Killzone: Mercenary stands above the pack with its stunning visuals and its fine controls. That's not quite enough to make it a great shooter, just a good one. It doesn't reach the high standards set by the last few Killzone games on consoles, or distinguish itself from any number of other shooters you've probably played over the years. But it's a gorgeous, thoroughly competent, intermittently exciting game that controls well and has an assortment of powerful and enjoyable weapons and gadgets to use.

You play as Danner, a mercenary whose loyalties are available to whoever has more space dollars on offer. You end up working for both the ISA and the Helghast over the course of the campaign, though as luck would have it, your tasks usually align with whichever side has the moral high ground in any given situation, so you can feel good about pumping bullets into soldiers on both sides of the conflict. (Aim for their heads, because even though they're no more dead when they go down, you earn more money, for whatever reason.) The story is absurd; one character's development follows the most cliche arc imaginable, as she goes from peace envoy to the sort of cartoonish, megalomaniacal villain who shouts things like "Innocent lives are the price of peace!" And attempts to make Danner seem like a noble warrior of sorts fall completely flat, since he seems to have no choice but to do what he ends up doing, if he wants to survive.

Though the story is silly, the worlds of Vekta and Helghan are strikingly beautiful in their stately elegance and their industrial ugliness. Neon signs are reflected in puddles in cluttered marketplaces, steam hisses from pipes in science facilities, and the diffused light of the sun fills the hazy Helghan skies. The campaign's nine missions take you through embassies and factories, along city streets and rickety mountain catwalks. Your enemies exhibit some intelligence, taking cover and blind firing at you, and when they are numerous, they use the environment to their advantage, coming at you from multiple angles. Some areas give you the freedom to take a stealthy approach, if you're so inclined, and you occasionally have a couple of ways to enter a building, with one being sneakier than the other. But although you face a few different enemy types, including Helghast heavies with volatile tanks on their backs, the run-of-the-mill soldiers who make up the bulk of your opposition are awfully easy to pick off with headshots.

Depending on the weapon you're using, this might make their heads explode in a display of carnage that you see so often that it quickly loses any impact and begins to feel unnecessarily grim. Similarly, your stealth kills, which require you to swipe your finger across the touchscreen in the direction of a displayed arrow that then matches the direction Danner swings his knife in as he plunges it into his foe's chest or neck or head, only foster a sense of detachment between you and the action. Despite the intense violence on display, the delay between your input and the action makes pulling off these kills feel mechanical.

Though standard firefights are broken up by the occasional hacking minigame, turret sequence, or other diversion, this is a game in which you spend most of your time shooting men in the face. Of course, the same could be said of many shooters, and because the controls are tight and the weapons feel powerful, it is satisfying to pop out from cover, take out an enemy or two, and then take shelter again as a shower of enemy bullets flies your way. But there's little in Killzone: Mercenary's core mechanics or structure to set the experience apart from ones you've likely had dozens of times before. This game is content to be a solid traditional shooter, and doesn't attempt anything that might have made it a special one.

In addition to the pistols, machine guns, sniper rifles, shotguns, and other firearms you can purchase from the independent arms dealer kiosks conveniently located in each area where you find yourself fighting, there are an assortment of powerful tools called Van-guard systems available. You can carry only one of these at a time, and they have lengthy cooldown periods, but they can give you the upper hand when you find yourself in a sticky situation. The Mantys Engine is a remote-controlled flying device you can pilot around, sneaking up on unsuspecting enemies and killing them instantly by stabbing them in the head with its nasty pincers. While active, the Porcupine missile system surrounds visible enemies with red circles, and by tapping them on the screen, you launch missiles that are almost certain to take out those targets. These and other Van-guard items don't last long enough to make being a mercenary a pushover, but they do give you a welcome edge in the occasional tight spot.

They're also available in Mercenary's multiplayer modes, but here, as in the campaign, their use is so limited that they don't make any players overpowered or disrupt the flow of the action. The three modes break down into a standard deathmatch, a team deathmatch, and the series' signature Warzone, in which your objective changes over the course of the match. You need to collect cards from defeated enemies one minute to earn points, then hack open capsules containing Van-guard items the next. Much like the campaign, these multiplayer modes don't distinguish themselves from those you might have played in plenty of standard shooters on consoles, but it's quite novel to play such tight competitive multiplayer in a shooter on a handheld device.

And that's what Killzone: Mercenary comes down to. It's not remarkable among shooters in general, but as a handheld shooter, it raises the bar considerably and demonstrates that there's no reason a handheld platform like the Vita can't give us shooters that measure up to those on consoles. It simultaneously leaves you impressed with its terrific visuals and traditionally satisfying gameplay, and disappointed that it doesn't try to carve out more of an identity for itself. Still, if you're looking for a shooter you can take on the go, you won't find anything that equals Killzone: Mercenary.

View Comments (313)
Back To Top
7
Good
About GameSpot Reviews 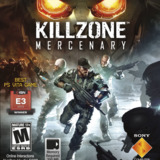 Before Killzone: Mercenary, the only Killzone game Carolyn had played was Killzone 2. Her writing services are not available to the highest bidder.