Though 2004's Killzone for the PlayStation 2 might not be the most fondly remembered of sci-fi first-person shooters, Killzone: Liberation for the PSP is bound to make a more lasting impression. For one thing, Liberation has just about zero to do with its PS2 predecessor from a gameplay perspective. It's still a shooter, but the viewpoint has been switched to an isometric, top-down view and the action itself has improved exponentially. This is a game that provides a great deal of intense shooting action, with tough enemy opponents that don't lie down and die easily. Throw in an ad hoc competitive multiplayer component and co-op play for the whole campaign, and you've got a thoroughly excellent package.

For those uninitiated to the Killzone universe, the series takes place in a futuristic society where humanity has taken to the stars. A militant subset splinters off from society to form its own government on a planet called Helghan. However, over time, this planet turns these people into something other than human--a race known as the Helghast. In Killzone, you were neck deep in the battle between the Helghast and the human race, fending off a Helghast invasion on a planet called Vetka. In Liberation, you're going in the opposite direction. Picking up where the first game left off, you're once again playing as the human soldier Templar. Now on the offensive, the human army is going after the Helghast, and you'll take on a series of missions, as Templar, to bring down the enemy. In truth, there's not much story progression for the Killzone universe to be found here. The game spends a small amount of time setting up the objective for each mission, and there's a basic plot involving a pesky Helghast general named Metrac and some key members of the human political and military system getting kidnapped. However, for the most part, the focus is very much on the action in Liberation, and not on the storytelling.

Were the action not so good, that'd be a real problem. Thankfully, you'll probably be too neck deep in fending off hordes of Helghast soldiers to care why you're doing it. Though at first glance Liberation looks like a Killzone-themed dungeon crawler, it's very much a shooter, and a challenging one at that. You begin each level with a specific gun--you start out with a weak assault rifle, and as you play through the game, you'll unlock more powerful starting guns--and a basic mission objective or two. Along the way, the Helghast will come at you in all forms, from groupings of grunt soldiers to rocket-launcher-wielding baddies to massive tanks. Killing them is challenging for a number of reasons, not the least of which is that they're very smart. Though you'll see occasional bad guys stand around in a stupid spot, just waiting to get shot, most of the time enemies will find cover the moment you start firing at them. They'll duck, they'll dodge, they'll launch grenades at you to try and flush you out from cover, and they'll even shoot an exploding barrel if you happen to be standing next to one.

Suffice it to say, the Helghast are very good at finding ways to kill you, so you have to be a good shot, as well as mindful of the environment. This is not a run-and-gun shooter. You have to be methodical in your movements, keeping an eye to cover points, knowing when and where to throw grenades, and basically just not walking into firefights with guns blazing.

The shooting mechanics are handled very well in Liberation. There's no specific autoaim function, but when you point your gun in the direction of an enemy, your character will lock on to that enemy. This mechanic works no matter where an enemy is standing, so if enemies are above you, you'll point up, and if they're below, you'll point there, too. Little touches like rocket launchers and tank cannons knowing where to lock their fire make aiming remarkably easier, as well.

That's not to say that the game can't be a bit frustrating at times. Maybe that's an understatement. Though it isn't cheap or broken, few games on the PSP will induce the same level of rage that Liberation's single-player campaign will. Because you need to figure out the environment to survive a fight, you'll be dealing with a great deal of trial and error. You will die in this game...a lot. On the plus side, the campaign has a great checkpoint system that rarely forces you to replay too terribly much of one section of a mission. Of course, that will be small comfort to those who find themselves getting decimated by scads of Helghast troops on a regular basis.

Another interesting wrinkle to the gameplay system is your ability to command non-player characters. Though you won't be accompanied by a computer-controlled ally on every mission, there are several sections where you'll have someone working alongside you, and in most cases, that's an allied soldier named Rico. By pressing up on the PSP's directional pad, you'll pull up a command menu that shows you exactly what you can make an ally do at that point. In most situations, you can simply command them to take a specific firing position, but you can also order them to, for example, attack specific enemies and plant explosives in key spots. The artificial intelligence does a great job of following orders, and you'll almost never have to give an order twice to get them to do what you want. In fact, the worst complaint you can say about the allied AI is that they have the ability to shoot you if you get in the way, and vice versa--and that will happen every now and again.

As thrilling as the shooting can be, and as much depth and variety as there is to the action, the gameplay has one notable flaw. Specifically, the core mission designs simply aren't up to par with everything else. It's not that they're bad, so much as they are very linear and generic. It's a lot of get from point A to point B scenarios, basic escort missions, and gameplay of that ilk. The basic level designs are good, but it's usually overly clear where you need to go at all times, to the point where exploration is largely unnecessary. The only times you might be confused are when you mistake a section of the scenery for an obstacle, when it's actually the path to the next area.

All told, the single-player campaign is very enjoyable, though also rather short and devoid of a decent conclusion. If you're good, you can get all the way through in about four hours (though in real time, it'll probably be more like twice that with the amount of postdeath restarts you'll have to do). But the campaign is good enough to play through multiple times, especially if you've got a friend nearby to play it with you. Every time you complete a mission in the single-player, that mission unlocks for the cooperative mode. Co-op play isn't too terribly different from the single-player experience. The game doesn't try to ramp up the difficulty by throwing more enemies at you, though it also doesn't give you more ammo pickups, meaning you'll have to be more careful not to waste it. Still, everything's more fun with a friend, and being able to go through the whole campaign cooperatively is a nice bonus.

Additional modes include a single-player challenge mode, as well as competitive ad hoc multiplayer. The challenge mode unlocks a series of challenges each time you complete one of the campaign's chapters. Objectives such as basic target shooting and timed demolition missions are the norm here. These are decently fun on their own, but by completing and scoring high on these missions, you can earn points that go toward character upgrades in the campaign. During the initial screen where you pick your weapons, you can choose up to three of the unlocked upgrades to take into battle with you. Increased health, additional grenade slots, and unlimited ammo bonuses are just some of the available options. What's especially cool about this is that different missions require different abilities, so being able to change up which upgrades you use from mission to mission is extremely helpful.

The competitive multiplayer should be the best aspect about this game, but it's unfortunately limited at the moment. There are four play types: deathmatch, team deathmatch, assault, and capture the flag. For anyone who has been playing multiplayer shooters over the last decade or so, these modes should be pretty straightforward. Functionally, the action is identical in multiplayer as it is in single-player, with the same weapons, same targeting functions, and same strategies. It's designed for up to six players to play at once, and you'll pretty much need as many people as possible to make the game fun. Playing multiplayer with just one or two people isn't that exciting, since the maps are a little too large for such a small number of players. However, what's really unfortunate about the multiplayer is that it isn't online. The game only supports ad hoc play, and the game-sharing option doesn't offer more than a couple of single-player demos. There is a download option that will allow you to get new content for the game, though the specifics and availability of that content haven't been announced. According to the game's developer, there will be more maps to go along with the six included with the game, as well as a downloadable patch that will add infrastructure multiplayer to the game.

Liberation's presentation might not look like much at first, with its zoomed-out camera view and seemingly drab setting, but as you get into the action, it warms up on you very quickly. The character models and animations are top-notch. The simple act of watching characters run around and shoot is pleasing enough, but watching them fly through the air after getting blown away by a big explosion is immensely entertaining. The game uses rag-doll physics with good effect. Occasionally, you'll see bodies clip through areas they shouldn't, but this is one of those rare cases where the rag doll looks less ridiculous and more realistic. All throughout the game, the frame rate holds up, too. Particularly huge explosions tend to make it drop a bit, but generally, the game runs totally smooth.

The game's audio is also very impressive. The soundtrack consists of the typical military march score that you'd expect, and it's actually a bit repetitive, but the sound effects are fantastic compared to what you normally find on the PSP. Guns sound great, and explosions sound even better. There's also some solid voice work from the supporting players. Mostly it's just Helghast soldiers screaming orders at each other, or just screaming due to imminent death, but the dialogue from your human cohorts is very good, as well. The only one that's a bit off is Rico. Seriously, how many times can you shout, "Eat lead, a******!" before the words lose all meaning?

While the single-player campaign is ultimately too short and devoid of story, and the multiplayer suffers from the lack of infrastructure play, Killzone: Liberation is still an excellent and engaging shooter. Its tightly woven shooting mechanics and tough enemy opponents create some of the most intense battles you'll find in any game on the PSP, and its great presentation and duo of multiplayer modes give it plenty of longevity. Some people might be put off by the difficulty and the brevity of the game, but most will find a thoroughly unique and enjoyable experience in Killzone: Liberation. 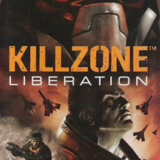