Ken Griffey Jr.'s Slugfest, as the name implies, is a fast-paced arcade-style baseball game that will appeal to anyone who wants an intuitive, easy-to-play game.

Fans of last year's Griffey game are sure to be pleased with what Nintendo and Angel Studios have come up with for Ken Griffey Jr.'s Slugfest - the game is a visually beefed-up version of last year's title, with a few little fixes and enhancements. Arcade-baseball game fans are sure to love it, although fans who prefer a more balanced simulation-style game should look elsewhere.

The overall presentation, control scheme, and basic feel of the game all center around ease of play. With three levels of difficulty and four different modes to play, there's more than enough to keep you busy for awhile. In addition, this year's game features a create-a-player mode that lets you build 20 different players.

The control scheme is set up, for the most part, just like last year's game. The default batting system features the target cursor, which you must place over a small box that indicates where the pitch is headed. In addition, there is classic, a second batting option, which takes away the batting cursor and lets you simply time the pitch. These two different styles of batting are great in games where players of different skill levels play against the computer, although it would be nice if the game allowed each player in a two-player game to select the style he preferred.

When fielding, you can throw the ball one of two ways - by pushing the analog stick in the direction of the base and hitting the A button, or by simply pushing one of the four C buttons that represents the corresponding base. The latter is the more effective of the two since your player will sometimes take a few extra steps in the direction he's throwing the ball when you use the analog-stick method. Fielding a ball from the outfield is extremely easy, thanks to the guide arrows that always point toward the ball. Even when the ball rockets past your outfielder, and he's no longer on the screen, all you have to do is push in the direction of the guide arrows and he'll find his way right to the ball. Overall, the control in Griffey is easy and intuitive, both when you're in the field or up to bat, but it isn't perfect. When you're hustling to make a play, it seems to take too long for your fielder to throw the ball. This is due to the lengthy animation that turns him to face the right direction before he throws. While it looks nice, the animation could still have looked as good and fit the rest of the game's pace better if it just took less time to complete.

Graphically, Slugfest is quite a step up from last years Griffey. It's no All-Star Baseball 2000, but the game does have that extremely sharp hi-res look to it, especially when you're using an expansion pak. The player models this year aren't nearly as boxy. Instead, they've got an extremely smooth look. The animation of the players is varied and well-done.

In the audio department, Slugfest is good, as far as baseball games go. It features play-by-play calls by Mariners announcer Dave Niehaus, as well as an umpire that at times sounds a little strange, a standard PA guy, and Ken Griffey himself making some color-commentary calls every once in a while. The sound effects are fair, except for one annoying sound, which occurs when you are throwing a special pitch - it sounds like an impression of a slide whistle. All this audio is presented in Dolby Surround, so those of you who have a good sound system will be able to take advantage of it.

In the end, Ken Griffey Jr.'s Slugfest, as the name implies, is a fast-paced arcade-style baseball game that will appeal to anyone who wants an intuitive, easy-to-play game. It's especially good for younger players who might not want to deal with some of the complex batting and pitching schemes of other N64 games. Fans who enjoy a sim-style baseball game should probably just stick to the option-laden All-Star Baseball 2000. 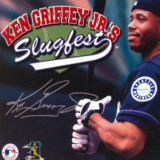