Rolling a katamari is as charming as ever, but you may have rolled most of these katamaris before.

When the original Katamari Damacy first rolled onto the scene in 2004, it turned heads because its unique concept and distinctive sense of style made it entirely unlike anything else out there. Now, five years later, what once seemed wonderfully strange feels familiar to fans of the series, and with Katamari Forever, Namco Bandai seems to be trying to cash in on that familiarity. Katamari Forever is the video game equivalent of a greatest-hits album; among its 34 levels, only three are entirely new, while the rest represent some of the best and most memorable content from earlier games. The lack of new content is disappointing, but this is the strongest set of katamari-rolling craziness ever compiled on a single disc. The Prince and his katamaris look better than ever, making this a good introduction to the series for newcomers and an enjoyable way for diehard fans to revisit the series' best moments.

While the gameplay is, for the most part, recycled, the story is entirely new, and it's delightful. The King of All Cosmos, looking resplendent in his new white outfit, is demonstrating his jumping prowess by leaping into the heavens, when he's whacked on the noggin by a dark star, knocking him unconscious and giving him amnesia to boot. Our hero, the pint-size Prince of All Cosmos, comes up with the only reasonable solution to this problem: building a robotic replacement for the king. As you progress through the game, you'll perform requests both for the real king, venturing into his mind as he dozes to roll up katamaris that will help him recover his memories, and for the roboking, as the king's synthetic surrogate is known. The roboking is every bit as amusing as the real deal, and his more analytical musings make for a nice change of pace from the king's completely goofball poetic ramblings. In the end, of course, the cosmos is only big enough for one king, and the story's conclusion is oddly poignant and entirely fitting.

The core gameplay here is largely as it has been from the get-go. As the prince, you're repeatedly ordered to make a new star or planet or some other cosmic object. To do so, you roll a katamari around all manner of cluttered, surreal environments. The world of Katamari Forever is one in which streets are lined with ice cream cones and littered with rice cookers. In fact, there are thousands of items of all kinds to roll up and collect. Smaller objects stick to the katamari, and as it gets bigger, it can roll up bigger things. Objects that initially towered over your katamari will eventually become dwarfed by it, and rolling up objects that once seemed impossibly huge continues to be a source of satisfaction and joy. Some stages may start with rolling up coins and thumbtacks and end with rolling up people and cars, while others let your katamari become massive enough to roll up skyscrapers, giant sea monsters, and even entire countries. Regardless of the scale, making your katamari bigger remains fun and addictive.

The mechanic of rolling the katamari around remains consistent throughout. You'll use both thumbsticks to steer the katamari around in much the same way that many games mimic tank controls. But while most levels simply ask you to roll up the biggest possible katamari within the allotted time, some levels change things up a bit. For instance, one level (from We Love Katamari) replaces your katamari with a sumo wrestler whom you must make fat and heavy by rolling up as much food as possible, before using him to knock another wrestler out of the ring. Another (from Beautiful Katamari) gives you no time limit but requires you to make the biggest possible katamari while staying under 300,000 yen, requiring you to carefully avoid the pricier objects scattered about. The three new levels are memorable enough to fit right in amid this collection of series highlights. The best of these has you using the katamari as a sprinkler to restore verdant life to an arid desert. The way flowers and greenery spring up in the wake of your katamari make it a visual delight as well as a conceptual departure from a typical Katamari Damacy level.

There are two new elements to the gameplay in Katamari Forever. For one, the prince can now leap mightily into the air, making it easier to climb ledges or get atop objects. This prince hop can be done by quickly shaking the controller, which isn't always responsive, or, thankfully, by simply pressing R2. Also, you'll now find hearts scattered about the levels that, when rolled up, temporarily make your katamari a vacuum, sucking in nearby items. These additions might make the levels feel a bit different for those who have played them to death in their previous incarnations, but they're not significant enough to dramatically affect the gameplay.

With 34 levels in all, it will take most players around five or six hours to reach the credits. But as with earlier Katamari games, the fun lies not in simply completing each level, but in going back and rolling a truly impressive katamari. There's no shortage of objects to roll up and add to your collection, as well as the prince's playable cousins and fashion accessories to find. And online leaderboards make the pursuit of katamari greatness more interesting. After completing the story, you'll start to unlock additional modes. The most novel of these is Katamari Drive, in which your katamari rolls around at a ludicrous speed. The experience is one of barely controlled chaos, and it's a lot of fun. There's also Eternal mode, which lets you roll your katamari around a level without the pressure of a time limit, and Classic mode, which does away with the hearts and prince hop to duplicate the gameplay of Forever's predecessors. These modes don't quite make up for the lack of original level content, but they do add some replay value.

There's multiplayer here, too, though disappointingly it's the same two modes that you've probably seen before, and neither offers online play. Co-op mode has you and a friend rolling a single katamari. The sheer awkwardness of this endeavor makes it amusing, and you'll have to communicate and coordinate your movements if you hope to do well. Vs. mode puts you and your opponent in a small environment and has you racing to roll the bigger katamari. If you make yours big enough, you might even be able to roll up your opponent. It's a nice competitive twist on the core game, but the split-screen display limits your visibility quite a bit.

The classic Katamari Damacy graphics have gotten a nice upgrade for their PlayStation 3 debut, while maintaining the appealing simplicity that has defined the series' look. Every object in the environment looks crisp and well defined, even at its closest. By default, there's a filter that makes everything look like a moving pencil sketch, bringing a captivating liveliness to the visuals. There are other filters as well--one that imitates a woodcut, one that makes the graphics cel-shaded, and one that mimics the visuals of the earlier games, though they're much sharper--though these filters need to be unlocked, which is unfortunate for those who prefer one of these options to the default setting. And the camera woes that have plagued the series are here. When you roll under or behind an object that obscures your view, sometimes a peephole will open to give you a clear look at your surroundings, but sometimes it won't, which can be a problem if you get caught on something. Musically, Katamari Forever carries on the series' tradition of wildly catchy soundtracks. In keeping with the game's retrospective format, most of these tunes are remixes of songs from earlier games, and they all sound terrific. The eclectic mix of sunny J-pop, throbbing dance music, jolly jazz, and more is sure to work its way into your head.

Considering the budget price points at which earlier games in the series have been released, and that most of this game is recycled content, $50 is steep. And it's perhaps a bit early for the Katamari Damacy series to be resting on its laurels with a retrospective compilation like this one. If you're eager to revisit your fond memories of katamaris past, you'll find that rolling a huge clump of stuff is still as irresistible as ever. And if you're new to this whole katamari thing, Katamari Forever conveniently features the best content you've missed from the earlier games. But this is all very well-covered territory. For its next outing, the katamari had better blaze a new trail or two. 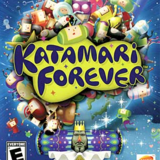