Katamari Damacy is far and away one of the strangest, most original games to come along in years.

Katamari Damacy is far and away one of the strangest, most original games to come along in years. The gameplay concept, the visual style, the soundtrack, even the backstory are all conceived and executed with such a unique flavor that, when presented as a whole, it's difficult not to be drawn in by all the weird little idiosyncrasies. It's not a complex game, nor is it especially challenging, or long. It is, however, unapologetically surreal, which can make it tough to look away from, and its toylike gameplay model makes for a surprisingly satisfying experience.

There have been many a puzzle game that has laid down a flimsy backstory for the sake of context, but none have had a flimsy concept as totally strange as Katamari Damacy. It seems that the King of All Cosmos, a colossal celestial being who is equal parts Hunter S. Thompson and the King of Spain, and who diligently speaks using the royal We, got a little "crazy" one night and woke up the next morning with a headache and the realization that he had lost all the stars. Now, the King of All Cosmos is a real think-outside-the-box kind of monarch, so he sends you, the Prince of All Cosmos (we can only assume this is his full name--the King only ever refers to him as Prince), to Earth to collect enough stuff to create a whole new set of stars by rolling up anything you can find into a big ball. Though the game takes a few liberties with the translation, the localization is really solid, and the writing for the King of All Cosmos is consistently weird and funny, and you definitely get a keen sense of him as a character.

While the King of All Cosmos is incomprehensibly large, the Prince is only a few inches high, and when you start the game, you are given a katamari (which roughly translates to "clump" in Japanese) not much bigger than yourself. You're ordered to roll it around the world, collecting anything you can to increase its size. Basically, you stick stuff to your katamari just by rolling over it, and almost everything in the world around you is fair game--the catch is that your katamari has to be big enough to take all these items on.

Using the analog sticks exclusively, you'll roll the katamari around with tanklike controls. Pushing both sticks up moves the katamari forward, pushing both sticks down moves it backward, and pushing one stick up and one stick down will cause it to turn. There are a few other tricks, such as moving both sticks up and down really fast to gain a quick boost, or pushing in on both sticks to hop on the other side of the katamari and quickly change directions--but this is basically all you'll need to know in order to control it. However, controlling it well is a more nuanced thing. The shapes of the things you collect will affect the overall shape of your katamari, thus affecting how it actually rolls. So, if you roll over a bunch of pencils or a ladder or some carrots, it can make your going a bit more challenging.

Most of the levels in Katamari Damacy are simple races against the clock--you have to make a katamari of a specific size before the clock runs out. However, there are certain constellations that require a katamari to be built out of specific stuff that corresponds to the shape of the constellation. For example, Pisces requires you to collect a number of fish, while you'll need to find the biggest bear that you can to create Ursa Major. As you progress, the scope of what you're rolling up gets bigger and bigger. The game starts you off inside a Japanese home, then moves you out into the yard, then into town, and it just keeps going from there.

Once you complete the final level, which takes the game's steadily increasing scale to a gratifying extreme, there are a few formal pieces that can keep you coming back. Many of the levels contain a royal present for the Prince, which, if collected, can be worn by the Prince. The presents include odd random bric-a-brac like scarves, headphones, and championship wrestling belts, though sadly, you can't adorn him with more than one of the gifts at a time. There is also a split-screen versus mode, where two players race against time and each other to build a bigger katamari. This mode isn't nearly as engaging as the single-player game because it takes place in the same small arena, effectively removing the grand sense of scale that makes the game so cool in the first place.

Katamari Damacy has a formidable amount of replay value, though, simply because the whole experience is so much fun, and each level is so crammed with tiny details that you don't feel like you've seen it all just by playing through it once. Finishing the single-player game can take five or six hours, but it's not hard to imagine playing it for much, much longer. In some ways, Katamari Damacy is almost more of a toy than it is a proper game. Yes, there are specific goals, and it occasionally requires a modicum of strategy to meet these goals, but hitting these marks can almost become secondary to the goals you end up setting for yourself. As you try to roll up anything and everything into a big ball, you'll inevitably happen upon an item that you want to add to your katamari, but you just aren't quite big enough to roll over it yet. It immediately becomes your short-term goal to roll up whatever you can in order to get big enough so you can add the item.

Nothing in the game is just "junk," and the game makes a point of identifying every single item so that you can actually go to a menu screen and browse through a catalog of every type of item you've collected so far. The breadth of stuff in the game is simply ridiculous.

The gameplay conceit behind Katamari Damacy is fairly unique, but the game launches off into strange, uncharted territory when it comes to the presentation. The game has a real cubist look going on, with lots of hard edges and right angles, which is a nice contrast to the rolling. All of the environments generally feel pretty mundane and plausible, but the way items are placed and the way they will move around the world on their own accord creates a dreamlike experience. For example, you can't explain why the backyard is covered in u-shaped magnets and eggs, but there's an obvious pattern to their configuration, though it doesn't matter either way. The game also does a great job of conveying a sense of scale by making faraway landscapes look fuzzy, but without making your ever-increasing size too jarring. One minute you'll be rolling up erasers and lipstick off the living room floor, and the next thing you know you're rolling through the market district, picking up shoppers of all shapes and sizes. Most importantly, Katamari Damacy has a look that is highly specific and completely unified. It's really weird, but within the context of itself, it works.

As you listen to the sounds of Katamari Damacy, you'll find it hard not to be reminded of Samba de Amigo and Space Channel 5 (if you've played them), two games that were built on the foundation of a single, high-energy, retro-sounding song. Katamari Damacy also has a singular, extremely catchy theme, which comes up in the game in a variety of different forms. Sometimes you'll just hear a single voice humming it, other times it will manifest in a full-bodied dance-pop song, and it is key in establishing the fun, enthusiastic vibe of the game. There's plenty of other music in the game too, and though it plays the field from synthesized J-pop songs to jazzy swing numbers, it stays consistent enough in tone to keep any of the transitions from being too harsh. Katamari Damacy offers plenty of strange sounds outside the music, too. All of the dialogue for the King of All Space is written out, though he'll vocalize everything to sound like turntable scratches. The game will regularly focus on a family living on Earth that is being affected by the loss of the stars, and their odd, slightly monotonous delivery of dialogue, while not "good" in the technical sense, adds to the already surreal pitch. Everything makes a noise when you add it to your katamari, and people tend to make the most racket, usually screaming in terror and occasionally giggling.

Even though it's a pretty small contingency, Katamari Damacy comes to the US with a built-in market of players who appreciate things uniquely Japanese in nature, and this game most certainly qualifies as that. But unlike so much other otaku-bait, Katamari Damacy is not overly esoteric, and the mechanics are simple and enjoyable enough that people of virtually all shapes and sizes should be able to pick it up and start having fun in minutes. That the game is being released at a budget price certainly makes it a lot more tempting to try something a little weird and a little different.

View Comments (1)
Back To Top
8.7
Great
About GameSpot Reviews 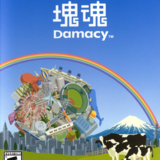