Karnaaj Rally is a blast to play, although it may be a brief experience for some players.

Karnaaj Rally is a racing game with a style similar to that of games like Micro Machines and RC Pro-Am. The top-down perspective and tiny vehicles give you a sense of racing that's larger than life. At the same time, the physics are realistic enough to convey the feeling of the different terrains as you drive across them yet relaxed enough that you can swerve through corners and skip across shallow water with relative ease. The game also sprinkles in a few weapons and betting opportunities here and there. All told, Karnaaj Rally is a blast to play, although it may be a brief experience for some players.

It doesn't take long to work your way through the career mode, which has four levels of competition and about 40 races in which to compete. You can choose from three different cars in each of the four classes and earn money to upgrade your car by winning races or placing bets. Even though you'll probably finish second or third in a fair number of races, you can still use your prize money to purchase better engines, tires, and armor, which will eventually help you to win a goodly number of future races. Betting is an interesting addition to the game, as only a small number of wagers rest on your ability to break a lap record or to win a race. Sometimes, you can make money by destroying a specific opponent's vehicle or by guessing the correct order of finish in the next race. Even so, you need only a modest amount of skill to save up some cash, upgrade your car, and win the entire season with just one or two close calls along the way.

Even though it doesn't take long to finish the career mode, it will still take one or two trial runs before you get the hang of the controls, and the game itself is enjoyable enough to warrant well more than a single play through. The controls make it easy to steer a wide drift around a turn or to take a tight corner with a timely burst of acceleration. Before each race, you can purchase a limited number of rockets and land mines to use against your opponents. These weapons aren't just for show. A car's ability to grip the road or to accelerate decreases in relation to the amount of damage that is incurred. Each car also has a certain amount of turbo boost, which can be used to speed past opponents or to push through the kinds of nasty skids caused by snowy or oily terrain. For the most part, the course designs are exceptional. They're not plain old ovals, and they're not overly lengthy. You can race six laps in under three minutes and encounter all kinds of obstacles along the way, such as rocky outcroppings, oil slicks, basketball-sized boulders, and even a wandering sea lion or two. In a lot of places, you can veer off course and run over traffic cones, tire piles, or pedestrians. Pedestrians tend to leave bloodstains. Another nice aspect of the gameplay is that the computer opponents actually put up decent competition. They'll cut you off in order to slow you down, and they're smart enough to leave land mines in the paths left by your tires on previous laps.

The game's graphics enhance the overall experience of playing. The developers at Paragon 5 have combined 3D vector graphics with traditional 2D sprite graphics to create environments that are simply breathtaking when viewed on the relatively modest confines of the Game Boy Advance screen. Tall treetops and birds hover above the raceway, and they move smoothly past as you speed along the course. There are tunnels that you can drive though, overhangs that you can drive under, and small boulders that you can punt along the raceway. If you drive onto the dirt, you'll leave tire tracks or kick dust onto the road. The level of detail is superb, right down to the signs, parking cones, pedestrians, and wildlife that you can actually destroy with the front end of your car. You'll even notice a hint of sunlight glinting off the cars as you twist and turn your way along the course. There's nothing here you haven't seen before on more powerful consoles, but many of these effects are brand new on the Game Boy Advance.

The audio is nowhere near as groundbreaking as the visuals, but it's certainly not bad. The music is upbeat, and there are a handful of different tunes to listen to, so you won't be stuck hearing the same piece over and over again. The sound effects for the various engines, crashes, and explosions are loud, even if not altogether original. Before each race, an announcer calls out the prerace countdown.

In most respects, Karnaaj Rally is a great game. Nevertheless, the career mode isn't diverse enough to keep your attention for the same length of time as the other games you've no doubt acquired for your Game Boy Advance. Also, this game doesn't have any key features, such as a garage to contain your cars, awards for accomplishing certain goals, or a battle mode to complement the traditional race mode. Otherwise, the ability to drive through the jungle, upgrade your car, and launch rockets at your opponents is a spectacular recipe for fun. If fun is more important to your definition of replay value than features, you should definitely give Karnaaj Rally a try. 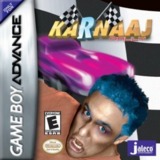