Karaoke Revolution is a cool piece of technology, and it definitely has the potential to be a lot of fun, especially in a crowd setting.

Originally released about a year ago on the PlayStation 2, Konami's Karaoke Revolution is now making its way to the Xbox. The singing game comes across entirely intact, but it also makes some additions--which include a longer song list by default and a collection of even more songs available via Xbox Live--that make it a more appealing package than the PS2 version was at its time of release. The technology is cool, and the game itself is fun, but as you'd expect, your enjoyment of the game will be directly tied to your own personal taste in music.

The game requires a microphone, since you'll actually be singing the game's songs. Two different packages are available in stores. The $60 version comes with a microphone, while the $40 package includes just the game. You can use your Xbox Live headset, but the mic that comes with the Xbox Music Mixer will work, as well. The Xbox Live headset is actually better for this game, since you'll be able to use its speaker as an in-ear monitor, which should help you stay in key more easily.

The game contains more than 70 different songs that attempt to cover both classic karaoke songs and some more modern hits. Like in an actual karaoke setting, the majority of the songs in the game don't feature the instrumentalists and vocalists who performed the original songs. So you won't get the actual artists, but you'll get "songs in the style of" artists like Michael Jackson, Avril Lavigne, Sugar Ray, Cyndi Lauper, Cher, Madonna, UB40, Huey Lewis & the News, and so on. While the game does try to cover a lot of ground, containing both older and newer, more-pop-friendly material, there's a pretty big difference between executing DDR steps to a song you don't care for and actually taking the time to learn the words and melody of a song you don't like. So it's pretty likely that, unless you're a big-time karaoke fan, you'll latch onto a small group of songs and stick to them. The Xbox version's wider song list means there's a strong possibility you'll find at least a few songs that appeal to you.

While the game can be configured to work as a standard karaoke product, there's a game here as well. The software measures your pitch, and it grades you accordingly. If you can hit the notes of the song and stay on-key, you'll do just fine, though for those of you who aren't already fantastic singers, the game has multiple difficulty settings that relax the judging a bit. While the game will keep an ear out for your pitch, it can't actually tell if you're singing the right words. So you can effectively mumble your way through a song or make up your own words as you go, and as long as your timing and pitch are passable, you'll do just fine. Onscreen indicators tell you both what note to sing and whether or not you're singing it properly. Rather than requiring you to read music, the game simplifies its display by showing you lines that scroll from right to left. The lines vary in height depending on the pitch of the note you're being asked to sing. The length of the line tells you how long you're supposed to hold the note. In all, it's a very rigid system that pretty much forces you to sing the song the way the game wants you to sing it, which in many cases isn't completely faithful to the original song.

The game has a few different modes. The arcade mode works like Dance Dance Revolution and just lets you pick any three-to-five songs you like. Showtime mode gives you specific songs to sing as you work your way through the game's different backdrops. You'll start your singing career at a house party, but by the end you'll have unlocked a huge stadium, complete with pyro and a blimp with your name on it. In a multiplayer setting, you and up to seven other players can take turns singing in arcade mode or in the karaoke competition mode. The difference between the two is that the game judges arcade mode, while the karaoke competition is judged by the other players.

Graphically, the game doesn't really have to look very good. Like in most other rhythm games, the background graphics are more for onlookers than actual participants. You can choose from several different characters, and the game has a handful of different background areas, like a train station, a house party, and the set of an American Idol-like TV show. All the areas look fine, though the models for the singer and backing band don't move all that much. They do manage to mouth along to your singing reasonably well, though, which is a nice touch.

The game gives you the option to adjust most of the sound levels. The songs come with a vocal track, but you can turn that off if you don't need the assistance. You can also adjust your microphone level, crowd noise, and so on. The game also has built-in support for downloadable content, so it's conceivable that Konami could release more song packs in the future. At present, there are a handful of free packs available for download, which extends the song list quite a bit.

Karaoke Revolution is a cool piece of technology, and it definitely has the potential to be a lot of fun, especially in a crowd setting. If you're a fan of karaoke, or think that enough of the songs on the disc are appealing, you'll certainly have fun with the game. But make no mistake, it's a product designed to fill a very specific niche, so if you aren't already at least somewhat interested in the subject, it probably won't win you over. 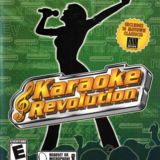