Despite a plethora of design and gameplay issues, it's hard not to enjoy the cute and varied experience contained within the game's 30 areas.

KAO The Kangaroo represents Titus' attempt to break into the 3D action-platform genre. KAO has been kidnapped from his native Australia, and it's up to you to help him punch, hop, and snowboard his way home. Despite a plethora of design and gameplay issues, it's hard not to enjoy the cute and varied experience contained within the game's 30 areas.

Unlike the fully 2D or fully 3D efforts of such games as Sonic Adventure, The Grinch, or Super Magnetic Neo, KAO The Kangaroo is an amalgam of styles. Some stages are distinctly three dimensional in nature and emphasize exploration and environmental interaction over combat. Other levels are less ambitious--2D tests of reflexes that send you running left or right and have you scaling walls in order to avoid oncoming dangers, lingering enemies, surprise pitfalls, or a mixture of the three. Every so often, you'll experience activity-based stages, where the only goal is to reach the end without crashing. Snowboarding, Jet Skiing, hang gliding, and podracing are but a few of the fun things you'll experience in these stages. As far as actions, KAO can hop, jump, punch, and whip his tail in response to the enemies or obstacles in his path. Additionally, power-ups--such as super gloves, turbo boosts, and checkpoint markers--also serve to spice things up. As is common with games of this type, you'll face a boss character every five levels or so, each of which is readily vanquished once you root out its pattern or weakness.

Sadly, KAO The Kangaroo has a number of flaws that sully--but don't ruin--the overall experience. First, the game's collision detection is imprecise and random. Sometimes, your punches will go right through an opponent, while at other times, attacks will vanquish them with no contact whatsoever. Surface interaction is similarly problematic, as it takes a lot of effort to nail jumps without sliding right off the majority of the game's platforms. More frustration is caused by the game's chase sequences, common occurrences that usually have you running down the screen to avoid an onrushing one-hit-kill object. Unfortunately, the controls remain "reversed" during these situations, forcing you to move relative to KAO's perspective instead of your own. You should also be given fair warning about the game's third boss, Zeus: He's terribly unfair compared to the other four. He possess no discernable pattern or visible weakness, and his projectiles and body can also damage you from distances measuring anywhere from centimeters to inches. Oddly enough, the key to beating him is lightly hopping around under him until he falls down, a strategy that both defies explanation and doesn't always succeed. Don't let these complaints sour your view entirely, though--the game is still highly approachable thanks to its varied gameplay and charming visual presentation.

Graphically, KAO The Kangaroo isn't perfect, but it's still quite beautiful. KAO is a whimsical protagonist whose giddy hopping and random jump-rope interludes fit nicely within the game's lighthearted setting. His enemies--which include Eskimos, sharks, lizards, and tribesman--are also very well rendered, although their polygon counts are a bit on the low side. Spanning 30 areas and 15 bonus stages, the environments in KAO The Kangaroo are mostly tropical or mountainous. As such, luscious transparent water, blowing palm trees, and majestic hills make up the brunt of the game's scenery. The amount of interaction and scenery within each level is enough to warrant a great deal of sightseeing. Nesting birds, sleeping alligators, and floating masses of ice are just a few of the many things to watch out for. Admittedly, the game's frame rate is choppy at times, and the use of fog to hide the game's draw-in distance is annoying, but it's a small price to pay for such large, expansive levels.

Unlike the rest of the game, KAO's audio is nearly flawless. Musically, the game is heavily reminiscent of Sega's Ecco the Dolphin or Nintendo's Legend of Zelda series. The use of real instruments helps give the soundtrack an emotional flavor, while the melodic tropical- and Irish-inspired themes really give the game a charming feel. The ambient and character sound effects are also crisp and plentiful. Waterfalls and lava flows have their own unique background samples, while KAO and his many enemies all have a number of vocalizations. Good examples are the turbo boost item, which makes a TIE Fighter noise when you collect it, or fireballs, which audibly singe the air when you're nearby. Hearing KAO shout "hai-ya!" does get old after the 10th time, but that's about the only exception in an audio presentation that's otherwise fun to hear.

Regardless of its flaws, KAO is certainly a charming game. Were it not for the game's imperfections, Titus would probably have the next Spyro the Dragon or Crash Bandicoot on its hands. As such, the current game probably won't satisfy those who've sampled everything the action-platform genre has to offer, but dabblers should find KAO's charming antics and approachable gameplay well suited to a weekend or two of lighthearted entertainment. 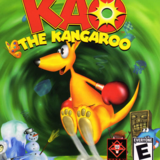