It's a great game that's a blast to play and comes highly recommended.

Tecmo's really hitting high gear right about now. After the success of Monster Rancher, the company is feeling confident enough to expand on the concept that made Tecmo's Deception so brilliant, and then some. For those of you not familiar with Tecmo's Deception, it was one of the most innovative games of the year when it was released back in 1996. Basically a real-time strategy RPG of sorts, Deception eschewed the usual sword and sorcery clich&eacute;, for a more unique approach to what people called a role-playing game. You were brought back from the dead after making a deal with the devil to wreak havoc on those responsible for your fate. Instead of leading the charge against an army of foes, like they do in most RPGs, you were trying to lure your enemies in your castle into your wide array of traps. Kagero: Deception 2 builds on that premise.

For starters, the first thing you'll notice in Deception 2 is that you can actually see your character. Yes, like in Tomb Raider. Your character's name is Millennia (or whatever you decide to call her) and the introductory CG reveals that Millennia was abducted as a child and re-emerged in her teens as the adopted daughter of a race called the Timenoids (yes, Timenoids). Essentially a tool for the Timenoids, a race that gave up humanity for immortality, Millenia is their human emissary of death. Used as the lynchpin in the war between the two factions (Timenoid and human), it is Millenia's responsibility to deal with the groups of human invaders who would take over the Timenoid castle. As in the first game, Deception II has dozens of thieves, barbarians, soldiers, ninja, knights, and sorcerers trying to enter your castle and steal vital artifacts, among other things. Being the sole proprietor of the castle, you must stop them.

Thankfully the interface in Deception 2 is much improved over the original. Gone is the ability to create monsters with the parts of dead enemies, but otherwise, everything else is a substantial improvement over the first game. Before each of the 30 or so levels is a little intro scene where those about to enter your castle discuss the situation outside. During this time, you occasionally confer with your guiding spirit, who may or may not be looking out for your best interests. Once those cheeky bastards enter the castle, you must tease them with your scantily-covered self into chasing you through the castle. Now, while the first few participants are fairly dim, and seem to be willing to walk into just about anything (including the spikes, boulders, and flame-throwers) you prepare for them, the later assailants are much more difficult. During gameplay, not only can you set up traps to punish your opponents, you can set them up (a la Rube Goldberg) to form chain-combos. For example, you can align a series of chain reactions to go like this: knight walks past wall, section of spiked wall slams out into knight, knight is thrust into electric chair, explosive mine drops from ceiling onto knight in electric chair sending him hurling into fireplace on opposite wall. It gets fun. The number of traps available in the later levels is astounding. And when the number of tricks is combined with the large number of rooms and various elevations, you can set an endless variety of traps for your unsuspecting enemies. But it's not a cakewalk; later opponents, like the quick moving ninja, take careful planning since they're able to deftly avoid slower traps. A good strategy must be implemented to compensate for these sort of variations.

In between matches, you can purchase different traps. As you progress, you'll find yourself building a considerable stable of traps, which you can switch among matches at will. At the end of each wave, the game will break down how your opponents died, with various rankings in various categories - very nice attention to detail for such a bizarre game.

Perhaps the one thing that keeps Kagero from being a truly astounding game is the graphics. The original Deception was OK for its time, while Monster Rancher looked great. Unfortunately, while Millennia looks awesome, the rest of the characters in the game look poor by comparison. While there was certainly effort made to make each person's face fairly detailed, the bodies were made of a relatively low polygon count, It doesn't affect gameplay, thankfully, but it could've looked better. The game also loads every couple of rooms to compensate for the huge environments and multiple characters. Textures are also a little grainy and the game feels less polished as a result.

Another problem is the frame rate, which is remarkably inconsistent. While running down a small hallway with only Millennia in sight, the game moves at 60fps, for a moment. When you enter the big room connected to the hallway, the game slows to about 15fps. Same thing when explosions and other special effects go off. When traps have been successfully triggered, you get a multiple-view replay of the hit. The presentation gets a little wacky (as in unintentional 'wacky') and could probably have used a little fine-tuning.

These lapses, however, are really just little aesthetic gripes. The game does boast multiple endings, providing high replay incentive. If you can get past the cheesy cover art (the original Japanese cover was so much cooler), Kagero provides an engrossing, addictive game that gets better as you play. If you liked the first game, you'll love this one even more. While it removes a few things that made the first so much fun, it more than makes up for it by shifting gears and streamlining. In fact, Kagero will more than likely pick up a few new recruits along the way. With a deep storyline, interesting main character, and endless variety of ways to play, Kagero: Deception 2 will snare you in its own unique trap. A great game that's a blast to play and comes highly recommended. 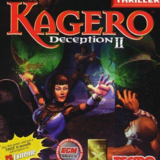 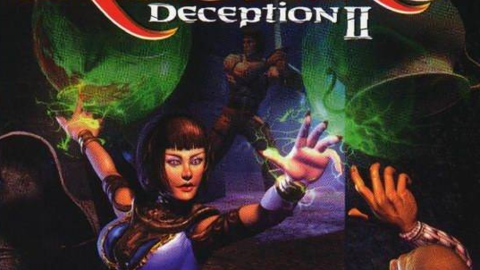 It's a great game that's a blast to play and comes highly recommended.