K-1 World Grand Prix has all the basics down, but ultimately the game falls just a little bit short.

While not quite as well-known as UFC or even Pride in North America, the fighting sport known as K-1, which features various martial arts based mostly on striking, is immensely popular in Japan. But whether you're new to the sport or have been a fan for quite some time, K-1 World Grand Prix from Konami can provide an entertaining experience, not necessarily because of its gameplay mechanics, but rather because it offers a wide variety of different modes that will keep you interested in this strategic fighter that successfully captures some of the nuances of the sport.

That's not to say that K-1 World Grand Prix is a perfect representation of the sport, or that it's even one of the better martial-arts-style fighting games on the market, because it still has some problems--the most prevalent of which are its controls. The control scheme is designed so that each face button on the PlayStation 2 controller is essentially mapped to a limb on your fighter's body--one button controls right punch, one controls left punch, one controls left kick, and one controls right kick. These punches and kicks can be modified by pressing in different directions on the analog stick or by coming out of a defensive stance. There are also buttons for executing knockout blows and quick combinations, which can also be slightly modified. While this control scheme isn't difficult to use, at times it just doesn't feel responsive enough, making it difficult to execute truly effective combinations.

Once you discover this, you'll undoubtedly stumble upon another one of the game's major flaws: You rarely have to use combinations at all. The best strategy in K-1 World Grand Prix involves repeatedly striking at your opponent's legs and then following up with a knockout punch or kick. This won't always result in a knockout, or even inflict a serious amount of damage on the other fighter in the ring, but it almost guarantees that you'll win the decision from the judges at the end of the match.

Of course, if you're a feeling a little more honorable, K-1 World Grand Prix does present a number of alternative strategies. There are three main areas you can attack on an opponent's body: his head, his chest, or his legs. After repeatedly pounding on one of these sections, the area will become vulnerable, meaning that the next few punches or kicks to that section will result in a knockout (if you're going for the head) or an injury knockout (if you're going for the legs or chest). Whatever method you decide to use ultimately depends on the fighting style of your opponent and the types of attacks he's vulnerable to. Naturally, your opponent will be trying to do the same thing, but at the end of every round, you can choose to recover health in specific areas, regain your overall health, or forgo those options and instruct your fighter to go for the knockout.

It's a reasonable representation of the sport and the strategy involved, but it's the nuances of the sport that K-1 World Grand Prix executes really well. Just like in the actual sport, you'll see strikes that cancel out other strikes, as well as totally random knockouts. At one point during a match, for example, we fired a knockout kick at an opponent who had almost full health and stamina and actually knocked him out of commission simply because the kick came at the right time. You might say that such a thing isn't fair when it happens to your fighter, but it doesn't occur all that often. Plus, it's just one of the exciting aspects of the sport that has been incorporated pretty well into the game.

While the gameplay is obviously a major part of the game, it's not K-1 World Grand Prix's defining characteristic. In fact, the sheer number of modes and options will be the major draw for those looking for a game of this type. There are five primary modes in K-1 World Grand Prix: grand prix, champion's revolution, exhibition, trial, and revival. Grand prix puts you through six fights on your way to the K-1 championship, where you have to defeat two more fighters before winning the belt. Exhibition lets you jump quickly into a one-on-one fight, a tournament, or a team battle with five fighters per team. Trial offers two different types of fights: There's a time trial fight, in which you have to beat 12 opponents in as little time as possible, and an iron-man fight, in which you have to defeat as many opponents as you can before losing. The revival mode will likely appeal to fans of the sport, since it lets you reenact some of K-1's most famous fights. Interestingly, the only way you can win these fights is by executing the same move used to win the actual fight.

However, the most in-depth mode is the champion's revolution. This mode gives you an opportunity to take a relatively inexperienced fighter to the K-1 championship, but to accomplish such a feat, you first need to secure 1,000 points before the tournament starts. Points are awarded or deducted depending on your performance in fights--they're given out for things like aggressiveness, but they can be taken away if you clinch too often with your opponent over the course of a match. Interestingly, you also can train your fighter after each fight by entering him into a variety of different exercises that will train specific attributes. Some will increase punching and kicking strength or overall stamina, while others will test your ability to perform different combinations. There's also a sparring option that will give your fighter a general workout and improve almost every one of his attributes.

On the visual side, K-1 World Grand Prix is pretty disappointing. The graphics aren't a significant improvement on the graphics in the previous versions of the game released in Japan. While the fighter models look like their real-life counterparts--complete with tattoos and unique sets of trunks--the level of detail is pretty low, which is pretty ridiculous, when you consider that the arenas in the game aren't very detailed either. The animation is fairly good, but there are times when it can look a little stiff.

As for sound, the game features a fairly standard electric-guitar soundtrack. There isn't any commentary in the game, but there is voice-over for the ring announcer, who introduces the fighters and reveals the result of the judges' decision at the end of a match. The crowd noise is pretty generic as well, though there are occasionally some weird shouts from people in the crowd that sound as though they were recorded in a metal shack.

K-1 World Grand Prix has all the basics down. The potential for strategic fighting is there, even though you can basically rely on a single strategy, and all the intricate aspects of the sport (such as early knockouts) are present. The sheer number of modes and the unlockable features--such as blocky versions of the fighters--give the game quite a bit of longevity. But ultimately, the game falls just a little bit short of its potential with its clunky combination system and somewhat unresponsive controls. Fans of the sport will probably want to check it out, but if you're just a general fan of martial-arts fighting games, then you may want to simply rent it. 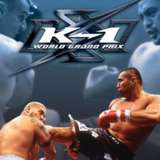 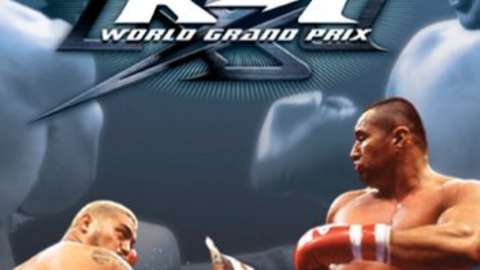 K-1 World Grand Prix has all the basics down, but ultimately the game falls just a little bit short.