It's a familiar formula, but Justice League Heroes offers something interesting by blending dungeon-crawling convention with comic book heroics.

Justice League Heroes takes much of what Snowblind Studios has done with swords and sorcerers in games like Baldur's Gate: Dark Alliance and Champions of Norrath and applies it to the capes-and-tights crowd, which makes for a surprisingly good fit. It doesn't have quite the width or depth of Activision's competing Marvel: Ultimate Alliance, but the tone is decidedly campier here, and the experience is still faster paced and more approachable than Snowblind's more traditional action RPGs. Although some fans might sweat certain casting choices or liberties taken with the DC universe, there's plenty of high-quality fan service to make up for it.

The by-the-numbers arc of the story shows the Justice League responding to a series of attacks orchestrated by Brainiac, only to uncover an even greater, more diabolical plot. There's some decent superhero banter and an underplayed yet surprisingly sharp sense of humor. The heroes seem to take the whole situation quite seriously, which makes moments like Superman ribbing Batman for his detective skills, an unspoken Donkey Kong joke, and The Flash's many one-liners surprisingly funny. In addition to the occasional chuckle, the story is absolutely crammed with DC universe minutiae. You'll fight Queen Bee, The Key, Killer Frost, Gorilla Grodd, the White Martians, and Doomsday in recognizable DC locales, such as the streets of Metropolis, a S.T.A.R. laboratory, Gorilla City, Mars, and the Justice League's Watchtower. If you pay attention, you'll catch tossed-off references to Plastic Man, Dr. Light, Solomon Grundy, and Vandal Savage. You don't need to be a huge Justice League or DC Comics fan to enjoy Justice League Heroes, but if you understand what a Mother Box is, the story is definitely geared to you.

Though the game shares a writer with Justice League Unlimited, fans of the cartoon may be a little disheartened to learn that none of the cartoon's voice actors are used in Justice League Heroes. This isn't to say that the voice acting is bad. In fact, Ron Perlman and Michael Jai White put in solid turns as Batman and the Green Lantern, respectively. The rest of the League does a decent job, though the voice of Superman doesn't have the necessary presence. The sound design is generally quite heroic and the soundtrack eclectic, with music that can go from sweeping orchestras to driving, electronic-tinged rock.

The game is worlds away from the usual dark, mystical Tolkien- and Gygax-inspired high-fantasy settings that are favored by most hack-and-slash dungeon crawlers, but the formula works because a few things have been tweaked and streamlined. Rather than playing as just a single hero for the duration of the game, you'll have the chance to play as the seven core members of the Justice League: Superman, Batman, Wonder Woman, Green Lantern, Martian Manhunter, The Flash, and Zatanna. The heroes work in pairs, and for the first half of the game, you'll have no control over which heroes will be used in the next level. Intermittently, though, you'll be given the task of choosing your own heroes. Because you have no idea about the nature of the next level, this task has a Russian roulette vibe to it.

Unlike Justice League Heroes on the PS2 and Xbox, the PlayStation Portable version is strictly a single-player affair. It's a shame, because this is a game that was obviously designed with two live players in mind. So, even though you'll always have two heroes in play, you'll have direct control over only one of them at a time. This is usually fine, because the artificial intelligence picks up the slack in combat quite dutifully. Along with being able to switch which character you're controlling on the fly, you can affect how aggressive the friendly AI is as well. The pathfinding is a little weak, and there are times when your partner will get stuck in a corner and start spinning around in circles like a maniac. It's not a terrible bother, because getting far enough away from your partner will eventually cause them to teleport to your location, but it happens often enough to be a bit of an annoyance.

As you might imagine, each character's special powers can vary quite a bit, though they are all basically controlled the same way. Each has a normal and a strong attack, which can be easily strung together into multihit combos. Depending on how you develop your characters, you could go a long way just punching guys. Using the basic combat abilities exclusively does get boring quickly because every character has the same handful of multihit combos, which can feel mechanical at times. The attacks can look really great, and each hero has unique and appropriately hard-hitting animation, but you'll find combos continue long after you've bested your enemy and stopped hitting buttons, leaving your hero to play out the rest of the canned attack animation against thin air.

You can block attacks, and hitting the block button quickly after being knocked down will provide reduced recovery time. All heroes can jump over obstacles, and tapping the jump button again while in midair will cause some heroes to fly, some to glide slowly to the ground, and some to perform a midair somersault. Taking a cue from Master Chief, all heroes can regenerate both their health and energy as long as they stay out of harm's way for a few seconds, though felled enemies will occasionally drop power-ups that will instantly refill them. Death is little more than a minor setback in Justice League Heroes, as the game features a liberal number of checkpoints. Still, even on the default difficulty level, Justice League Heroes can offer up a good challenge from time to time.

From the start, each hero has access to three special powers, which you activate by holding a button to pull up an onscreen context menu. It's here that you'll find most of the heroes' trademark abilities and gadgets, which not only make the combat flashier, but prove all but necessary when facing swarms of enemies or particularly tough bosses. Some of the abilities feel similar among the heroes. For example, Superman's heat vision, Green Lantern's plasma bolt, Martian Manhunter's psychic pulse, and Zatanna's fire bolt are all functionally similar ranged attacks. Still, there are plenty of character-specific strengths and abilities that help make each hero handle differently, making them uniquely suited to handle certain situations. It's a little weird how The Flash runs around at the same speed as everyone else and how flying characters can hover only a few feet up in the air, but the five unique special powers available to each hero go a long way in making them feel like their comic book counterparts.

As you beat your way through hordes of alien warriors, a wide variety of killer robots, freaky interdimensional monsters, and the regular boss encounter, you'll gain experience levels. With each level, you'll earn points that you can put toward your existing special powers or use to unlock new special powers or increase basic characteristics like combat, health, energy, and regeneration. Enemies will also drop "boosts," which are special power-enhancing orbs. If you've put experience points toward abilities or characteristics, you can apply these boosts to them. There are six types of boosts--damage, efficiency, range, luck, speed, and duration--and they can be found in seven different quality levels. You can also combine three unused boosts into a single, more powerful boost. While experience points and boosts can enhance your performance, you'll need to collect special JLH shield icons hidden in dark corners throughout the game if you want to alter their appearances. With enough shields, you can buy all kinds of alternate costumes, which actually have an effect on the heroes' abilities as well their costumes. Additionally, the shields can be used to unlock all-new heroes, including Aquaman, Green Arrow, Hawkgirl, and the Huntress, among others.

The action in Justice League Heroes is pretty straightforward. Most of the time, you're simply making your way from one end of a level to the other, tearing up as many enemies as possible along the way. On occasion, though, you'll be charged with rescuing civilians or destroying specific machinery, which are tasks that the game makes apparent with a persistent onscreen compass. You'll also come upon locked doors that you'll need to unlock by entering a specified button sequence in a limited amount of time, which adds some quick minigame action to the proceedings. The levels are usually designed to funnel you in a specific direction, but if you get lost, there's a handy minimap that gives you the lay of the land and highlights important points.

Justice League Heroes uses the same basic technology that powered Snowblind Studios' first real hit, Baldur's Gate: Dark Alliance, though in the process of scaling down to the PSP hardware it's lost some of the finer graphical details. Justice League Heroes still has a really clean look to it. The environments, while relatively small, cover a wide range of locations. Though there's not a terrific variety of enemies within each level, the enemies you'll face change as you travel to new areas. The overhead camera perspective keeps the action from feeling as grand as you might expect from this band of superheroes, some of the outdoor environments look a little grainy, and the occasional overuse of light and particle effects can create a little slowdown. At this point, it's not going to blow anyone's mind, but Justice League Heroes looks well put together.

While it shares a lot of its components with Snowblind's past dungeon crawlers, Justice League Heroes has a pretty unique flavor. It flexes the strengths of the DC universe quite well, and there is a respect for the source material that should satisfy fans. The character customization gives you enough freedom in shaping the heroes without betraying the characters, and at about 10 hours, it's a healthy-sized adventure. The game does both the comic book and the dungeon crawler parts well enough that it has the potential to turn fans of one into fans of the other. 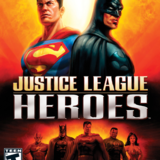