Not everyone is born with the ability to dance, so thankfully Just Dance doesn't require you to be the next Michael Jackson. All it asks is for you to drop any inhibitions and shake your groove thing to some classic pop hits. While the dance routines are well choreographed and a lot of fun, the game's control scheme is imprecise and so the gameplay ultimately becomes frustrating and unrewarding. Just Dance also omits many features that are common in the rhythm genre, such as a career mode, downloadable songs, and rewards for good performances. What you're left with is more of an interactive dance video than a game, and while that can be fun in short bursts, the appeal soon wears thin.

The premise of Just Dance is incredibly simple. You pick a song to dance to, hold the Wii Remote in your right hand, and copy the moves of the virtual dancer onscreen. This simplicity makes the game accessible to newcomers, who won't have to worry about learning complex control schemes. Up to four players can get together for a dance-off, each competing for points, which are awarded based on movements tracked by the Wii Remote. Each move is scored as bad, OK, or great, and at the end of each song you're given an overall score and can see how it compares to your friends'. If you're bad, you don't have to worry about failing; you just carry on with a low score.

This is fortunate, because the game isn't particularly good at recognising your dancing performance. Even if you make the instructed movements, you're often awarded with poor ratings, which is a minor problem in the standard Quick Play mode but a real issue in some of the other modes. For example, Strike a Pose mode requires you to freeze at random moments during a song, with the stillest pose earning more points. No matter how still you stand, though, it's nigh on impossible to get the game to recognise this. Last One Standing mode is even worse. You start out with seven lives, and you lose a life for each bad move or gain a life for every five great moves. Not only is this imbalanced, but the poor controls result in a frustrating experience where it's difficult to keep going for a worthwhile length of time.

Quick Play mode lets you play all 32 songs without unlocking them, allowing you to jump straight in and dance with friends. Highlights include hits such as MC Hammer's "U Can't Touch This," Blondie's "Heart of Glass," and The Trashmen's "Surfin' Bird." More recent hits include Blur's "Girls and Boys" and Katy Perry's "Hot N Cold." Each song is performed by a stylised dancer, dressed in clothes either directly related to the song's music video or appropriate to the time it was released. For example, the MC Hammer dancer dons the requisite parachute pants, while the Katy Perry model is dressed in a wedding outfit, like in the music video for "Hot N Cold." The dances are well choreographed and are both fun and at times downright hilarious. There's a lot of amusement to be had watching your friends attempt to do the running man to "U Can't Touch This" or wave an imaginary lasso above their heads to "Cotton Eye Joe." The dances vary in difficulty, rated from one to three stars. No dance is so difficult that it's impossible, though you may find that Deee-Lite's "Groove Is in the Heart" contains more flexes than the average human body can handle.

There isn't much else to Just Dance; there's no online multiplayer or a music store. Having all the songs unlocked from the start is great for a party, but the lack of any rewards, or even a simple career mode, make Just Dance a bore for single players. While the dancers themselves look good in their neon clothes, the rest of the game is poorly presented. Backgrounds are badly rendered low-resolution images, score bars are pixelated, and the artwork for each song looks downright ugly.

Just Dance more than lives up to its title, offering little more than a collection of dance videos wrapped in a poorly presented package. As a single-player experience, it's wafer-thin, and the lack of a career mode means there's little to keep you playing for extended periods of time. If you can get a group of friends together, it becomes a fun party game as you attempt the silly dances, laugh at each other's mistakes, and sing along to the cheesy pop tunes. Just don't expect to play it again once the party's over. 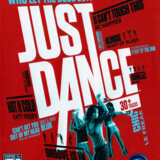