Jurassic Park: Operation Genesis is an enjoyable game that should appeal to dinosaur buffs and park simulation fans alike, thanks to its attractive graphics engine and unique features.

Amusement park simulations are among the best-selling games on the PC market today. Their popularity should come as no surprise, because these simulations can appeal to such a broad audience--men, women, and children alike. While the genre tends to lose a bit of its charm in the transition from PC to console, the main gameplay usually remains intact. Most of the games based on the Jurassic Park license to date have been pure action games, while the premise of the original movie was the creation of the world's greatest zoological park. Universal Interactive has finally taken the logical step with Jurassic Park: Operation Genesis, a strategy game that lets players create and manage a dinosaur zoo. Jurassic Park: Operation Genesis is an enjoyable game that should appeal to dinosaur buffs and park simulation fans alike, thanks to its attractive graphics engine and unique features.

Operation Genesis' 3D graphics engine does a good job of rendering the lush terrain of a tropical island. The dinosaur models are quite detailed, allowing players who have even a passing knowledge of paleontology to immediately spot the differences between similar-looking dinosaurs such as the brachiosaurus and the camarasaurus. The models are also scaled accurately--small velociraptors are dwarfed by the much larger tyrannosaurs, for instance. Weather effects like rain, wind, lightning, and tornadoes add to the overall effect. The engine lets you rotate your view in any direction and also has a wide range of zoom, so you can get in close to examine individual dinosaurs or get a much wider view to manage your park comfortably. Operation Genesis even offers special effects like reflective water, which contributes even more to the overall immersion. However, the added graphic effects come at a price--once in a while you'll notice the frame rate stutter as you pan around a particularly crowded park.

Operation Genesis sounds almost as good as it looks. Each of the game's dinosaurs lets out different types of noises, depending on whether it's playing, hunting, sick, or frightened. Your park advisors provide some audio cues, and they even visually resemble the actors from the original movie (though their voices are provided by stand-ins). The in-game music is the very same score written by John Williams for the original Jurassic Park film.

Operation Genesis' interface is probably its weakest aspect. The game has no visible cursor; selecting something involves trying to center the screen on the object. Although this isn't difficult for the most part, it can get annoying when you're trying to click on individual park visitors or on smaller dinosaurs that happen to be standing next to very large dinosaurs. Having a visible cursor might have made this process less difficult. Also, the game provides no way to cycle between the different dinosaurs in your zoo, which can make trying to keep track of them more annoying than it should be. Picking out larger dinosaurs is easy because they're so large, but some of the smaller ones like velociraptors can be hard to spot from a zoomed-out view. Thankfully, you can see the location of all your dinosaurs on the game's minimap, but the game probably could've benefited from a "cycle to next dinosaur" button.

The gameplay in Operation Genesis revolves around creating a park full of dinosaurs for your visitors. The game provides several different kinds of challenges. First, you'll need to create secure enclosures that provide a safe environment for both dinosaurs and park visitors. To keep your park secure, you'll need to build electric fences of varying strength, security cameras, ranger stations, and even sentry guns. Tornadoes and rampaging dinosaurs can cause breaches in the fencing and also damage buildings, but thankfully, the game's map interface makes it easy to spot any holes in your defenses.

Secondly, you'll need some dinosaurs--unlike games such as Zoo Tycoon, in which you simply purchase animals, Operation Genesis requires you to literally build your menagerie from scratch. You'll hire fossil-hunting teams in various parts of the world and then place them at dig sites to seek out dinosaur bones or amber. You'll then send the artifacts to your genetics lab, where you'll extract DNA until you have enough of one species' genome to create a dinosaur from a hatchery. Though it's possible to create a dinosaur with only a 50-percent-completed genome, he won't live long--the more complete a genome you have, the longer your dinosaur will live. This contributes to the game's strategy, because it costs you time (and money, if you choose to buy fossils and amber from the fossil market) to find more pieces for a particular species of dinosaur. However, the time you put into completing a genome results in a longer-lived investment, since hatching a dinosaur costs a lot of money as well.

There are 25 different dinosaurs in Operation Genesis, each with its own unique behavior patterns and popularity rating among visitors. Keeping your dinosaurs happy is a complicated process. You'll be able to build feeding stations where herbivores can get bales of plant feed, while carnivores are fed live cows or goats. Watching a carnivore hunt hapless livestock is one of the more amusing parts of the game. However, your herbivores become unhappy if they don't have enough trees around them or enough nearby dinosaur friends to socialize with. Likewise, your carnivores have an innate desire to hunt other dinosaurs, so even a constant stream of cows isn't going to keep them happy. Thankfully, the game comes with a detailed "dinopedia" that tells you which other species your herbivores can be friends with, and which dinosaurs your carnivores prefer to hunt. Keeping all these details in mind is part of the fun and strategy of building a successful park. Aside from keeping your dinosaurs fed and happy, you'll need to worry about six different possible diseases. Vaccines for these dinosaur diseases are part of your research tree, and since the diseases are often contagious, it's useful to keep a small pen as a quarantine area to move sick dinosaurs to while you research a cure.

Making park visitors happy is the other half of the equation in running a successful dinosaur zoo. There are four primary types of visitors: mainstream consumers, who are easily amused; thrill seekers, who enjoy seeing carnivores hunt; fun lovers, who like seeing herbivores play in large herds; and dino nerds, who are the most demanding and become upset if dinosaurs from different eras are kept in the same pen (this obscure information is also kept in the dinopedia). The visitors also have standard needs, so you'll want to build basic amenities like restaurants and benches.

The most challenging aspect of Operation Genesis is creating your park in such a way that your dinosaurs can be seen by the visitors. There are only a few types of structures you can build for visitors to see dinosaurs. These include viewing vents, which are built into the fences; viewing towers; and viewing domes, which are built into the ground inside of dinosaur pens and accessed by tunnels. One of the most impressive features in the game is the ability to get into a viewing vent or dome yourself and see what your visitors can see. Sometimes a tree may be blocking a vent, or you may have placed a tower too far away from centers of dinosaur activity--getting into these structures in the first-person mode can give you clues as to why specific vents and domes are popular or unpopular.

The most unique features in Operation Genesis are the ranger helicopter, the land-cruiser safari tour, and the hot-air balloon tour. Every ranger station you build in the game comes with a helicopter that you can control. In a helicopter, you have the ability to perform a number of tasks, such as lowering a rescue winch to pick up lost visitors, using a herding device to herd wayward packs of dinosaurs, and shooting dinosaurs in the first-person mode. You're not always shooting to kill--sometimes you'll need to vaccinate your animals, and this is done by firing darts from a helicopter. But once in a while, you'll find a pack of carnivores on a rampage, and that leaves you no choice but to kill them all by sniping them from the ranger helicopter. And if you don't want to get your hands dirty, the game lets you assign ranger helicopter tasks to the AI, which does a competent job of hunting and shooting.

The safari tour and balloon rides are similar to the viewing structures because they feature a first-person perspective that lets you get closer looks at the dinosaurs. In the case of the safari tour, you have control over the vehicle and where you drive, though you need to be careful, because angry dinosaurs can smash the car. The balloon is a safer ride, and it's even possible to snap photographs while on a balloon tour. Each photo is assigned a score depending on composition and the number of species in the photo. From time to time, your park's public relations manager will sell the photographs to a magazine, which is another revenue stream for the park.

Operation Genesis has three modes of play. One of these is a set of action-oriented missions in which you sit in the land rover or the helicopter and kill rampaging carnivores, rescue park patrons, or herd loose herbivores into a pen within a specific time limit. These missions are extremely easy and can be beaten in a matter of minutes. There are also "exercises" that offer more open-ended play, like building a park with a set of specific goals that must be achieved, such as displaying specific species or achieving high popularity scores on certain rides. Finally, the game includes a sandbox mode, which allows you to create your own island to build on.

Even though children will be attracted to Operation Genesis because it has dinosaurs, parents should take note of the ESRB "T for Teen" rating on the box. There's some blood in the game--carnivores can kill livestock, other dinosaurs, or park visitors if they get loose. You'll also need to put down rogue dinosaurs from time to time by shooting them. The violence is never gratuitous, but parents may want to consider these facts before getting this game for a young child. For dinosaur fans who are mature enough, Jurassic Park: Operation Genesis provides an enjoyable experience, with attractive graphics, strategic gameplay, and unique features that provide up-close looks at the dinosaurs in action. 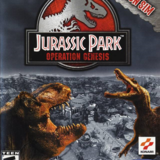 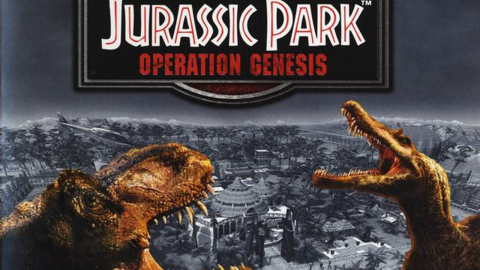 Jurassic Park: Operation Genesis is an enjoyable game that should appeal to dinosaur buffs and park simulation fans alike, thanks to its attractive graphics engine and unique features.