This game has nothing to do whatsoever with Univeral's megahit movie. What it has to do with dinosaurs, or even video games in general, is also unclear.

Are you ready to guide ace pilot Lori Torres and photographer Mark Hanson through the 12 dinosaur-filled levels of Konami's Jurassic Park III: The DNA Factor? Who are they, you ask? Despite taking place smack dab in the middle of the same Isla Sorna that's portrayed in the recent motion picture, this game has nothing to do whatsoever with Univeral's megahit movie. What it has to do with dinosaurs, or even video games in general, is also unclear.

After a plane crash scatters a dozen DNA canisters all over the island, you, as either Lori or Mark, are given the unenviable task of retrieving both the errant canisters and the DNA particles they once contained. To the designers at Konami's Honolulu Studio, this translates into an ill-conceived mixture of side-scrolling platform levels and brief puzzle-based interludes.

Your sole task in the game's side-scrolling missions is to gather up enough DNA to reactivate the base-DNA canister resting at the end of the level. Since this is Jurassic Park's breeding area, a number of carnivorous dinosaur species litter the island and potentially stand in your way. To evade them, you have a few options: Kick or shoot your way out, or jump, roll, and run away from danger. If need be, you can also run into and out of the background, a confusing little gimmick that is mainly used to increase the amount of backtracking you'll have to do to collect the particles you need. Once in a while, giant boss dinosaurs lumber onto the scene, the majority of which require careful evasion skills to pass. Unfortunately, the slightest bit of contact will "kill" your character and force you to retry the entire level over again.

Tedium notwithstanding, the problems observed in DNA Factor's side-scrolling areas are simply too numerous to list. Here are a few of the choice examples: Dinosaurs can't be killed and quickly react when you cross onscreen hot spots. The hit detection is unflinchingly precise, often requiring that you wander uncomfortably close to dinosaurs in order to stun them. The dinosaurs themselves are difficult to see, as they're tiny and often blend in perfectly with the similarly colored jungle backgrounds. A complete lack of shadows, scaling, or any other type of perspective-depiction doesn't help matters any. The sound effects and music are equally disappointing. Bland dinosaur roars, a few human screams, and some gunshots are all you'll hear scattered among the game's three or four cheesy action anthems.

About the only real highlight in Jurassic Park III: The DNA Factor is its puzzle stages. While not spectacular, these areas feature crisp visuals, an efficient use of sound, and a semi-intelligent premise. Using the DNA you've collected in the game's side-scrolling areas, you have to maneuver and shoot particles upward into a swirling DNA strand. You have to avoid enemy particles that will attempt to intercept your efforts, and you also need to make sure your launcher doesn't smash into the strand itself. If you successfully complete the sequence before running out of particles or destroying the strand, you'll revive the dinosaur within the canister! What any of this has to do with dinosaurs or the movie itself is a mystery, but it's not terrible either.

Still, a smidgen of intellect surrounded by garbage does not make for a good game. Jurassic Park III: The DNA Factor is not a good game. This is only the first of three Jurassic Park III titles that Konami intends to bring to Nintendo's Game Boy Advance system. Hopefully, it won't be the best of the bunch. 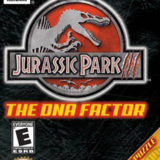 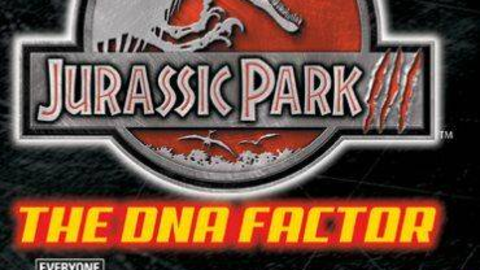 This game has nothing to do whatsoever with Univeral's megahit movie. What it has to do with dinosaurs, or even video games in general, is also unclear.

4.1
Sign In to rate Jurassic Park III: The DNA Factor