Journey To The Savage Planet Review - A Pulpy Sci-Fi Romp

Lighthearted exploration on a not-so-savage planet.

Journey to the Savage Planet is a fantastic name for a pulpy sci-fi game, but is a bit of a misdirect when taken at face value. A "savage planet" conjures up thoughts of hostility and survival, tapping into the inherent dangers of life on the frontiers of space. Sure, there are things that want to kill you in Journey to the Savage Planet, but they're only a minor inconvenience rather than the main focus. Instead, developer Typhoon Studios places the emphasis on exploration, coupling this with genuine humour and a charming tone to present a lighthearted and singularly focused chunk of sci-fi adventuring.

The entire game takes place on a single planet located deep in uncharted space. You're strapped into the space boots of an employee of Kindred Aerospace--a rinky-dink outfit that's so proud of its standing as the fourth-best interstellar exploration company, it'll make you shudder to think of how bad the fifth-best must be. Once your feet touch the planet's surface, you'll begin to catalog the flora, fauna, and life located across the various biomes of planet AR-Y 26 to determine if it's fit for human habitation, what with the whole climate change thing ruining Earth.

Journey to the Savage Planet excels when it comes to the assortment of tools and equipment you can gradually craft and use to reach every nook and cranny of the planet's surface. You're immediately free to explore as you see fit, but it doesn't take long to discover plenty of inaccessible areas. As such, much of the game is spent scanning the flora and fauna to reveal whether they have gameplay benefits or are just there to contribute to the planet's vibrant and colorful aesthetic. Some plants may contain seeds that restore your health or produce projectile explosives, while most of the planet's hodgepodge glossary of alien critters are filled with resources you can gather if you're heartless enough to put a laser blast between their eyes. Gathering these resources and locating items that can be reverse-engineered using your ship's 3D printer allows you to craft equipment like grappling hooks, double-jump upgrades for your jetpack, and other tools that make traversal and deeper exploration possible.

The whole game latches onto this palpable sense of momentum, as each new upgrade opens up more of the planet for you to probe. Your feet may be firmly planted on the ground in its opening stages, but by the end of the 10-hour adventure you'll be gliding across natural ziplines hundreds of feet in the air, propelling across perilous chasms with a triple jump, and using a powerful ground pound to unearth new passages. Journey to the Savage Planet adopts the classic Metroidvania formula and executes it wonderfully, presenting you with an ever-growing arsenal of tools that are satisfying to use and feed into the game's inherent focus on exploration.

Of course, the other side of this equation is the planet itself, which is well worth turning inside out. AR-Y 26 is split into three distinct biomes. Each one is moderately sized, resulting in the planet's scale feeling manageable and allowing you to explore freely without fear of getting lost. When presented with multiple paths, it's easy to choose one over the other because you know getting back to that initial fork in the road is going to be relatively easy. This encourages you to poke your nose in every crevice, travel to every far-away cave, and check behind every waterfall. You're often rewarded for doing so, with extra resources or important upgrade items hidden throughout the planet--not to mention the visual treats that are on offer in each disparate biome, whether you're navigating through the craggy icy caves and glaciers your ship landed on, walking amongst the overgrown pink and turquoise mushrooms of the Fungi of Si'ned VII, or jumping between the floating islands of The Elevated Realm.

Journey to the Savage Planet isn't a completely leisurely tour, though. Your first order of business is to develop a futuristic blaster pistol, but combat is a means to an end rather than a major part of the game, and it ends up being a drag. While most of the planet's creatures are docile, there are outliers that become hostile as soon as they spot you. Defeating these aggressive predators involves a rinse and repeat pattern whereby you use a nifty sidestep or jump to avoid an attack before following up by shooting one or multiple weak points. There are only slight deviations on this back-and-forth that require you to lob an explosive or poison cloud at the enemy before you can pepper its weak spot. The pistol never feels quite accurate enough for the job, especially because you're usually being asked to hit small targets, and each of the combat's faults comes to a head during the game's closing moments as you're thrown into one fight after another before facing off against the final boss.

You can play the whole game cooperatively with a friend, which does make combat slightly more bearable, but co-op doesn't alter the moment-to-moment gameplay in any significant way. Conflicts are easier with two people, sure, but there's nothing about the co-op experience that's intrinsically built for more than a single player. You can explore the planet together or opt to split up and cover different ground, but that's about it.

Playing with a friend can result in moments of emergent humour, but Journey to the Savage Planet is also genuinely funny due to the abundance of FMVs located on your ship. These short and incredibly eccentric videos mock and parody everything from exploitative corporate practises to the video game industry. There's a commercial for a new game elegantly titled MOBA MOBA MOBA Mobile VR V.17 Golden Fleece; its main selling point is having more microtransactions than any other game, with one of its features being an in-game "Custo-mi$er" for your created character. The humour is somewhat frontloaded, but this does help the game's irreverent charm establish itself early.

Journey to the Savage Planet borrows plenty of familiar elements from other games, yet it does so in a carefree way that sets it apart from other sci-fi exploration games, settling on a relaxing playstyle that's informed by its single, vivid planet and tightly focused design. It only takes a couple of hours to reveal its humdrum combat, but this is the only significant damper on what is an entertaining slice of lighthearted planetary exploration. 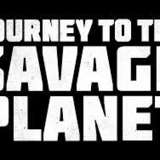 Journey to the Savage Planet
Follow
$29.99 on Walmart
Buy

Richard spent 10 hours reaching Journey to the Savage Planet's conclusion on PS4, picking up a decent number of collectibles on the way. Review code was provided by the publisher.