Imagine the bleakness of the man versus giant creatures gameplay of Shadow of the Colossus as a definitively Nordic tale, and you have a general idea of what Jotun is. Sprinkle in a little bit of Dark Souls’ difficulty and a malevolent sense of challenge, and you’re closer to hitting the bullseye. Now imagine all of that hand-drawn in a style somewhere between Dragon’s Lair and Princess Mononoke, and you’ve got Jotun.

Boiling the game down to its disparate parts does the game a mild disservice, though. In execution, Jotun is a perfect storybook, a game that seems ripped from the imagination of a Viking child being told tales of warriors of old facing down their gods. It’s a wonderfully wild, vibrant bedtime story told with fire and verve, even when the game is at its most stark and lonely.

Jotun tells the tale of Thora, a Viking shield maiden who falls from her boat during a voyage and drowns. Because passage to Valhalla is only granted to those who fall in battle, Thora is given the chance to earn her way into the golden halls by finding and killing the Jotun, the Titans of Norse mythology. Along the way, the gods assist her, granting her new power when she finds their shrines and pays her respects. Otherwise, all she has is an iron axe and an iron will. We learn between stages where Thora’s determination comes from in a fantastic, steely narration performed in Icelandic. Each new piece of her story would be worth it on its own, revealing years of underestimation, neglect, and later, a sibling jealousy that turns tragic. Even if the gameplay wasn’t as good as it was, being able to help Thora achieve glory would be more than worth the effort.

Gameplay is 16-bit levels of simple, and yes, that is a compliment. You have a light attack with Thora’s axe, a hard-hitting heavy attack with a major delay, and a dodge. Thora can find massive shrines to the Gods in each stage, and by praying there, she earns new magical powers specific to each one--Thor allows her to use Mjolnir for a short time, Frigg allows her to heal at will, Loki creates a decoy that eventually explodes after a time--but all six of the powers have limited uses, and none are what you would call a guaranteed solution to any sticky situation. Primarily, timing, cunning, and luck will get Thora to Valhalla.

For most of the game, that cunning involves mastery of the environment. Jotun’s six stages, which can be tackled in any order, are impeccably designed. They are deceptively linear, laid out in such a way that gives the impression of vast, stunning tableaus in places dwarfed in size by your typical Diablo III dungeon. The illusion works. Grand, breathtaking vistas are the norm in Jotun, and they often serve as a wicked distraction from the dangers mere inches away. They’re also often rather desolate places, dark locales that no mortal has tread upon in ages. The game isn’t swarming with enemies, except for one particular stage that sends a veritable legion of dwarves your way. This bolsters the comparisons to Shadow of the Colossus, where the loneliness of what Thora has to do makes the sheer distance between each new obstacle feel like a greater journey. The real problem with that desolation is that more than a few times, you’ll need to backtrack through some of these areas to find much needed power ups, or because you’ve missed a crucial switch in order to get to said power ups, or because you’ve ended up in an area and the game’s obtuse pause screen map didn’t help you.

The main events of the game, however, are the Jotun themselves as bosses. The Jotun are simply awe-inspiring enemy design, taking the rather threadbare descriptions from Norse lore, and extrapolating them to the nth degree, with each one several times Thora’s size onscreen.

The best is still the first: A nature giant that feels like Ursula from The Little Mermaid made entirely out of living trees and vines. Still, each of the bosses are just wonderfully realized, and you get maybe a good minute to marvel at them before the pain starts. A terrifying shield-swinging giant can summon a legion of dwarves out of the ground to rush at Thora with a scream. Halfway through the frost giant’s fight, the playing field turns into a sheet of slippery ice; when it’s down to a quarter bar of life, a white-out blizzard starts. A blacksmith giant has you fighting in a neverending firestorm. What the Jotun typically lack in speed, they make up for in power, where being in the wrong place at the wrong time during a fight will mean your end in two hits. The Jotuns’ patterns and weak points aren’t hard to suss out whatsoever, it’s simply a matter of using your limited arsenal to deal with them, and often with the horde of peripheral obstacles/enemies each Jotun will throw at you during, and quite often it will still not be enough. The game gives Thora infinite tries, and will start her right at the boss with each of her powers replenished each time she dies. Persistence and learning from the numerous failures will lead to success, but the game will not coddle, and every victory will be well-earned beyond a shadow of a doubt.

The PS4 and Xbox One ports of Jotun are very much on par with the PC version. The only major difference is the addition of Valhalla Mode, a boss rush that opens up after you beat the campaign. Aside from expanded health bars, an extra element of danger has been added to each boss battle taken from the campaign, forcing you to alter your attack strategy. The first stage's plant boss now has poisonous spores surrounding her weak points, making it a game of hit and run rather than patient strikes. Alternately, a sword-wielding forge boss has a much shorter window in which to strike. Valhalla Mode is a small addition, but a welcome one.

The Switch version of the game stands tall next to its more powerful console brothers, with not a single frame out of place, and no slowdown, even in the game's busiest and most expansive areas. In handheld mode, the moments where the camera zooms out to give players a full view of their surroundings, or to behold the game's numerous, massive bosses can sometimes make poor Thora a tiny red needle in a haystack. These moments are scarce, though, and it's a small price to pay for the game's epic scope.

The Switch port does, however, have one problem that's much less tolerable: A much longer load time stretching between 15-30 seconds when entering a new area or respawning after a death. The initial load for a stage is acceptable, and transitions to new areas within a stage are much quicker, but for a game whose greatest challenges come from trial-and-error bosses that can sometimes kill with a single hit, the wait time to have another crack and be maddening. It's a single flaw, but it's a crucial one that can add insult to game's legion of fatal injuries.

Jotun is a short game, and good players can probably plow through it in about 3 or 4 hours, but even with the ending behind me, I find myself dying to witness some images again and wanting to try different strategies. I want to hear Thora tell her tale again. Any good bedtime story that makes you want to hear it again right after it’s over is one for the ages.

Editor's note: Portions of this article were featured in our PC, PS4, and Xbox One Jotun review. 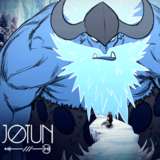 With no small amount of luck, and hundreds of deaths, Justin Clark was able to complete Jotun’s campaign. To his dismay, Chris Hemsworth was not the final boss. In addition to playing Jotun on PC, PS4, and Xbox one back in 2015, Justin spent a couple hours with the Switch version for this updated review.