Barry Steakfries makes a return with a Jetpack Joyride sequel that features an entirely new structure, but feels incomplete.

The original Jetpack Joyride released during an early apex of the mobile market. Small but quality games were successful, and the platform was not yet overrun with free-to-play gacha games. Jetpack Joyride represented a nice middle-ground, offering a fun core mechanic great for high score competition without overbearing microtransactions. In the 10 years since it was released, the market has changed. Premium games now struggle on mobile and while the most successful titles may ask for less money, they do it more often. Jetpack Joyride 2 could have pivoted to fit this new, profit-focused model, but instead developer Halfbrick opted to bring the game to Apple's Arcade subscription service. This means it won't ask you for a dime and it is also, surprisingly, no longer an endless runner. The new structure, with the familiar jetpack gameplay, is a fantastic choice that absolutely makes a better game, but it unfortunately is not yet complete, leading to a sudden and disappointing non-ending.

The core mechanic of Jetpack Joyride 2 is the same as the first. You, as Barry Steakfries (or the alternate reality female version, Betty Beefpies), sprint down a long hallway using a jetpack to move up and down and avoid obstacles. All these years later, narrowly dodging electric traps and missiles while the spray from your jetpack knocks over the scientists with the bad luck to get in your way is still an immediate blast. The change, however, is the sequel has levels, bosses, some light RPG mechanics, and even a shallow story. An endless mode is promised at some point in the future, but right now Jetpack Joyride 2 is a game with a campaign. The change is surprising considering the success of the first game (which still receives updates), but I like it. Beating levels is more frequently rewarding than having a series of bad runs before you finally have a good one, and the bosses are a fun additional challenge to cap off every few stages. Different levels also means stages look different as you progress, so you no longer have to stare at the same background while jetpacking.

Bosses, and levels to a degree, are overcome with Jetpack Joyride 2's other surprising new mechanic: Guns. About half your time is spent dodging obstacles, while the other half is spent shooting. This new mechanic fits in well and feels natural. This is partially because Barry and Betty shoot automatically, meaning you just have to line up your shot. It makes the shooting a basic extension of what you're already doing, and blowing up a robot with bullets as you drop below a passing missile feels great. The shooting action is even more fun against bosses as you both speed down the hallway exchanging fire.

Between jetpacking your way through assorted science facilities, you are using your collected coins to upgrade jetpacks and weapons. The various upgrades feel like they were conceived for a free-to-play game, as you exchange tokens for random weapon upgrades which you then need to buy with coins. Having different types of currency is never fun, but without real money backing them up, I enjoyed managing it and making decisions about what I wanted to upgrade and when.

A facility is also unlocked early that automatically generates the various types of currency, even if you're not playing. Dictating where the facility spends its resources and occasionally tapping away invading aliens and putting out fires so it can continue is a very simple, minor management sim, but I enjoyed not thinking about it for a few runs and checking in to find a nice cache of coins waiting for me.

The story of Jetpack Joyride 2 exists as a very soft context for what you're doing, but it is nothing noteworthy. Barry and Betty converse with the boss characters between levels with a line or two of consistently unfunny dialogue and will occasionally chat with a friendly scientist. The conversations are short enough that it thankfully does not become annoying, but it also doesn't add much to the forward momentum.

The story is tertiary to the fun gameplay, but I was still disappointed when the game suddenly ended. Once I defeated the third boss--after about eight hours of gameplay--I was greeted with a coming soon sign and no worthwhile incentive to continue playing. By the time I had beaten that last available boss, I had maxed out my level and unlocked the best jetpack. I believe developer Halfbrick when it says more content is on the way, but I was surprised at how abruptly it concluded with no fanfare. Jetpack Joyride 2 doesn't end, it just stops.

Despite the abrupt ending, I had a great time with Jetpack Joyride 2 up to that point. I am eagerly anticipating what gets added to the game next and fully plan to play it. The addition of gunplay and the new campaign-focused design makes the sequel feel fresh while bringing forward what was so fun about the original all without making any gameplay sacrifices. I just wish it was a complete package. 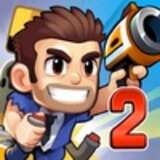 Kyle played all the available content in Jetpack Joyride 2, switching between using a mobile controller and the touch-screen. He acquired the game using an Arcade subscription provided by Apple.