Jet Set Radio was interesting in the year 2000, but the game needed more than a fresh coat of paint to make its awkward design worth revisiting.

When Jet Set Radio debuted on the Dreamcast in North America as Jet Grind Radio back in 2000, it offered a unique experience that no other console game of that era could match. Players stepped into the skates of energetic graffiti artists residing in the fictional city of Tokyo-to. The goal was to tag as much of the landscape as possible with colorful graffiti designs, a task made difficult by the presence of rival gangs that were attempting to do the exact same thing--and by a police force that believed the best punishment for such vandalism was death by guided missile. The only way to stay ahead of the threats was to keep cruising and grinding, leaping from one point to another and pausing only just long enough to spray an intricate tag before resuming the crazy rush.

Jet Set Radio relies heavily on its presentation and it doesn’t always stress the details. Stages end abruptly once you tag all available points (marked by red arrows), not when you achieve a certain score or defeat a challenging boss. The energetic beats looping in the background and the vibrant cel-shaded visuals have always been the primary reasons to keep playing, and those elements are especially effective now that all of the familiar artwork has been upgraded for high-definition televisions. Most of the original music also returns. Players discovering the game in 2012 may wonder what they’re missing, though, because there’s not a lot to savor beyond the funky presentation.

Jet Set Radio's most regrettable issue is its simple but somehow ineffective control setup. As your skater cruises through the various areas, even the simple act of skating in a straight line can sometimes prove difficult if you're not grinding a railing, because you have to hold the analog stick forward to build speed. The tiniest nudge of the analog stick can wreak havoc, since your skating graffiti artist is prone to wide sweeping movements rather than more precise motions. Yet if you need to change direction slightly while flying through the air (usually because your skater launched unexpectedly toward one side or the other rather than pushing forward in the anticipated straight line), fiddling with the analog stick often has almost no effect at all.

The rails you must frequently grind also lack stickiness, which makes landing on them at the end of a leap a tricky proposition. You may overshoot your intended destination, and that often means you must backtrack through hazardous territory so that you can make another attempt. Building up speed so that you can manage the long jumps required to clear gaps is also an issue, since by default your skater moves at a snail's pace. You're forced to pay entirely too much attention to the controls the whole time you play, lest a split second of inattentiveness lead to disaster.

The inadequate camera does nothing to alleviate such control issues, either. Many of the environments are practically barren until enemies begin appearing in response to your vandalism, but you still stumble across a few unwelcome piles of debris in the most inconvenient of places, or perhaps a series of vehicles parked along a street between you and a wall that you need to tag. The camera gets stuck on objects in confined spaces, jerks crazily if you're following a path through a winding corridor, or spins in such a way that you can't see environmental obstacles that in any other game would be easily spotted. The only way to make crucial runs in some stages is to first memorize their layouts through trial and error.

In some instances, you also must tag objects with precise timing, but since the left trigger serves two functions, it's easy to accidentally start messing with the camera instead of tagging the environment as you may have intended. Such goofs delay your ability to paint for a brief moment, which is time enough that you sometimes miss spraying a target that you should easily have been able to tag on the fly.

Instead of finding ways to alleviate the camera and control issues, the game's original developers at Smilebit used those flaws as a means of providing additional challenge. In one stage, for instance, your chosen skater must race along an arcing passageway, then leap onto a narrow and winding ledge, ride it along an S path, and finally leap over a balcony to land on a narrow bit of piping that when viewed from a distance blends in with the background. This scenario would be fun but not especially challenging in a game with responsive controls and a friendly camera, but in Jet Set Radio it is a chore. Building up speed requires a rush down a corridor with horrible visibility, and the leap from one construction beam to another requires that you guess properly about the precise positioning of a rail that often is off-camera.

In a few other stages, your skater's goal is to tag members of a rival gang with paint. The environments where you must do so are built to slow you down at every turn. In the first such mission, the cowardly goons skate along a sewer pathway that includes stairs, pools of murky water, and an enclosed passage that is littered with piles of immovable barrels and equipped with a trapdoor in the floor. Your job is to direct your skater as he or she races after those foes--who all move with an easy grace that most human players will never reproduce with their skaters--and spray them from behind several times. Until you memorize the stage layout in its entirety (along with the route your rivals follow), you don't stand a chance.

Not every stage is frustrating in the same way, and there are moments when you find yourself having some fun, but each new environment presents an exasperating wrinkle of some sort. The most common stage objective simply asks your skater to roam around and tag key areas while avoiding an ever-increasing police presence. Such levels begin with almost no resistance at all, which gives you time to gather paint cans (since your graffiti-loving skater always starts with none on hand). After you tag a few locations, though, you have to avoid tear gas, dogs, SWAT teams, a trigger-happy captain, helicopters that fire missiles, and other similar hazards. That had the potential to be exciting, but the finicky controls and ineffective camera make it difficult to track the location of your enemies until they're pelting you with bullets, grenades, or missiles.

As if the control and camera issues weren't bad enough, sometimes you may also find yourself accidentally exiting stages. The city environments you explore have invisible boundaries, and you receive a warning if you're about to pass one. However, no barrier prevents you from actually doing so. You are simply taken to the level selection menu. So if you're most of the way through a stage, an onscreen arrow indicator might be pointing you toward a point that you need to tag, and it may direct you along a path that leads you near an exit. Then you could get hit by a car or an explosive blast and knocked out of bounds before you have a chance to recover.

Jet Set Radio doesn't feel as much like a game as it does a test of endurance. Entertainment options have come a long way since 2000, and consumers now take smooth controls and a capable camera system for granted. Most gamers will find little joy in the outdated design elements that so thoroughly color this particular experience, even if they are in the mood for something retro. While the game was once an interesting way to pass the time, its value has expired, and a shinier coat of paint doesn't change that. 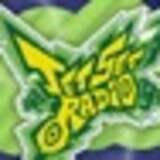