Naughty Dog has always been one of the strongest cards in Sony's hand. The developer's games are consistently among the most technically and creatively impressive to appear on the PlayStation and, more recently, the PS2. In the days of the first PlayStation, Naughty Dog was known primarily for a raft of games based on the only-slightly-loveable Crash Bandicoot, a character that was seen as Sony's answer to Mario. But in 2001, the company switched both consoles and franchises with the creation of Jak and Daxter: The Precursor Legacy, a whimsical platforming romp through a multitude of brightly colored worlds. The game had all the trappings of your typical platformer. There was Jak, the mute action hero with an array of snazzy moves; Daxter, the furry and wisecracking sidekick; and tons and tons of items to collect. When Jak and Daxter hit the scene, it filled a pretty conspicuous gap in the PlayStation 2's cutesy platformer lineup. What's more, its cliffhanger-ending left players expecting a sequel that would give us more of what made the first game so endearing.

That was before Grand Theft Auto rewrote the gaming rules. Endearing is no longer in vogue. Instead, urban grit and grime now rule the day, and it looks like Naughty Dog has been paying attention. The developer's new game, titled Jak II, has taken a distinct turn for the darker in nearly every aspect. However, the series' storyline, visuals, and gameplay have all adapted surprisingly well to recent changes in gamers' tastes. Jak II is quite a different game from its predecessor, though they share some basic gameplay mechanics, and its incorporation of several genres' styles will likely increase its appeal to a wider audience than that of Jak and Daxter. Perhaps most importantly, the styles come together in a very powerful way, making for a pretty amazing game.

Jak II begins innocently enough when Jak, Daxter, and their old pals, Keira and Samos, get to tinkering with some ancient precursor machinery. One errant press of the wrong button, however, and they're confronted by a big rift in the sky, a ghastly, trash-talking monster, and an unrequested trip through a portal, where they're launched through a big, multicolored-light tunnel. When they land, Jak and Daxter find themselves in a grungy, dystopian city where they're confronted by a group of red-suited guards under the command of the evil Baron Praxis. Daxter escapes, but Jak is taken hostage and undergoes two grueling years of experimentation involving the mysterious energy source dark eco. After two years of this torture, Daxter finally rescues Jak, who makes a vow to kill Praxis (Jak speaks--bitterly--in this one). The pair then make their way into Haven City to exact revenge or to, at least, figure out where the hell they are. Without spoiling too much, the game's storyline is stronger and contains more unexpected twists than you'd expect--especially if you played the first game. The Baron isn't the only villain; you'll also have to contend with "metal heads" who are an army of creatures that are always on the verge of besieging Haven City. The battle between the three factions--Praxis' army, the underground rebellion, and the metal heads--is surprisingly intriguing.

The flow of Jak II's gameplay is radically different from what fans of Jak and Daxter are used to. While the first game had you traversing its lavish environments in a sort of free-form, interconnected manner, Jak II operates with Haven City as its hub. The game's initial prison break sequence is straight out of the platforming handbook, but as soon as you enter the city proper, you'll see that Jak II's similarities to Grand Theft Auto are not limited to its more-adult tone. The streets of Haven City are populated by ambling townspeople, steady traffic from hovercars, and the Baron's jackbooted army, the krimzon guard, whom you can effectively think of as policemen. You can "borrow" a passing car by knocking off its driver, and this lets you cover ground through the city more quickly. But, of course, if you disturb the peace too much, you'll have the wrath of the krimzon guard to deal with. All of this may sound like what you're used to in Grand Theft Auto, which it is. It works surprisingly well, however, given the game's previously kid-friendly pedigree.

You can't wander around Haven City stealing hovercars and aggravating the cops all day, of course, and you won't. Jak and Daxter immediately become embroiled in an underground resistance movement against the Baron, and your involvement in this rebellion will have you running back and forth around the city completing missions with a wide variety of goals. Again, all of this plays out just like you'll remember from GTA. There are a number of story characters scattered around the city that you can find by using icons on your map, and when you visit them, they'll give you assignments that, when completed, advance both your access to the city and the game's storyline. Also like GTA, you'll find a number of optional missions that provide you with rewards but aren't required to move the plot along. The many missions are spaced out very nicely, and you'll often have several goals at one time. There is a bit of nonlinearity involved, so if you get frustrated with one of the required missions (and you will), you're usually free to complete something else and can try the difficult one later.

Jak II still retains its platforming roots in its missions, which mostly take place in unique levels outside of Haven City. These stages are where Jak II will feel most familiar to fans of its predecessor, as it plays almost exactly the same. Jak still has the same moves--the dash punch, spin attack, double-jump, and butt-stomp--that he had before, although he's also been given quite an arsenal of firearms to work with this time around. Though they go by different names, the guns in Jak II resemble what you'd expect to find in a more combat-oriented action game. There's a shotgun, a rifle, a machine gun, and a final weapon, called the peacemaker. Though the addition of guns to Jak and Daxter's sequel seems like a gaming non sequitur, it works surprisingly well, since you can switch between guns and snap off attacks so quickly. With a little practice, it's possible to create some pretty neat combos involving both your physical attacks and your guns. In addition to the guns, Jak's dark eco exposure has left him with the ability to become Dark Jak, a raging berserker who has increased speed and melee combat abilities. Finally, you'll pick up a hoverboard that can be used to zoom around more quickly through the levels--and it's actually required in some of them. The hoverboard also allows you to pull off Tony Hawk-style tricks in a skate park arena. Overall, Jak II has far more depth and variety in its mechanics than the previous game, and, thus, it's more entertaining throughout.

Like too many platformers, Jak and Daxter was based on collecting items. It had you looking for power cells (its version of Super Mario 64's stars) that were hidden around each level. Though you had to accomplish a lot of different tasks to obtain the cells, your end objective was always the same. Thankfully, Jak II's mission goals are far more diverse. You'll do things like nab a sacred artifact from a mountain temple, protect an important member of the rebellion (who fights with AI) through a combat mission, wreck the Baron's mining operations, knock out a transport ship, race through the city to deliver important goods within a time limit, and the list goes on and on. In other words, you'll almost always have something new to do when you seek a new mission, which definitely compels you to keep playing. Be warned, though: Some of the missions can be maddeningly difficult. Many missions, especially those that are time-limited, will force you to replay them multiple times just to figure out the optimal (read: only) method of completing them. Of course, there's still the opportunity to collect items, if you want to, but it's entirely optional. The collectibles give you some ability upgrades and enable a few game mods, like turning Jak's goatee off or enabling a "big head" mode.

In graphical terms, Naughty Dog's games have always been at the top of the heap for the two PlayStations. The company's graphics engines consistently demand more from the hardware than just about anybody else's, and its artists fill these engines with lush, detailed scenery and characters. Jak and Daxter was as much a graphical showcase of the PlayStation 2's capabilities as it was a fun action game, and, in this sense, Jak II more than lives up to expectations. The game is absolutely beautiful. Its environments are enormous, well-colored, and incredibly detailed. The levels ooze excess geometry everywhere you look, and they're all built with an obvious degree of care and attention to detail. The game characters are also highly detailed and animate very nicely, especially in the cinematic sequences. In fact, Naughty Dog has taken its cutscenes to a new level in Jak II. The character animation is as lifelike, expressive, and effectively characterized as you'll find in any video game. The voice acting is, for the most part, Hollywood-quality, and even the shots are set up by someone with an obvious talent for using a camera.

Aurally, the game comes across strongly, with nice meaty sound effects punctuating the action and, as mentioned, exceptional voice acting. The game's Dolby Pro Logic II support will obviously enhance the audio's impact, if you have capable hardware. The music is pretty good and never gets annoying, but it also isn't very memorable. Perhaps a GTA-style radio station function would've been nice to see in the city driving sequences, but this is hardly a glaring omission, and the game isn't worse off for it. In terms of overall production values, this game is a class act all the way.

Jak II is an enormous and ambitious game that succeeds on every level. Half an hour in, it's no secret that it draws very heavily from the Grand Theft Auto formula, but, then again, nobody damned the original Jak and Daxter for being a clone of Super Mario 64. If anything, Jak II's resemblance to GTA enables new opportunities for its gameplay and storyline that wouldn't otherwise be available had Jak II remained a simple platformer. The gameplay is rewarding, the story twists and turns more than you'd expect from a game like this, and everything comes together to produce one of the best-looking, best-playing games on the PS2 so far. 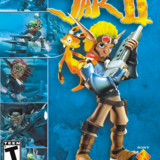 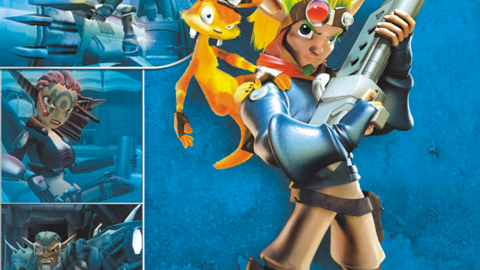