Jade Cocoon is easily one of the best-looking games of the year.

One of the most surprising developments of the year has to be Crave Entertainment's acquisition of Tamamayu Monogatari or, in the US version's case, Jade Cocoon: Story of the Tamamayu. The result of the combined efforts of both Katsuya Kondoh (who, with Studio Ghilbi, produced the animation classics My Neighbor Totoro, Kiki's Delivery Service, and Princess Mononoke) and developer Genki, Jade Cocoon is one of the most visually stunning RPGs ever made. Famous for his art direction on anime like Kiki's Delivery Service, Katsuya Kondoh also participated in projects like the anime Like the Clouds, Like the Winds, which was staged in an ancient Chinese-looking universe.

Assuming the role of Levant, a young man burdened with the responsibility of saving the world (and you thought high school was tough!), you must battle multitudes of monsters in your travels and eventually capture them as well. Captive monsters can be combined and recombined with others to create almost limitless amounts of new creatures. More than 150 monsters, with different elemental attributes, are waiting to be found. Once they are caught, combined, and maximized, you can summon your monsters in battle for use against whatever foes you encounter. Gameplay revolves around navigating through your hometown in search of advice on exploring the rest of the world, while actual exploration sets you out on gorgeous prerendered backdrops. Still, the focal point of this game is to battle and acquire as many monsters as you can find and to bring them home and combine them. The control interface is menu-based and very self-explanatory. A little trial and error will familiarize you with even the most complex operations, which aren't that difficult.

Monster-breeding aside, the most obvious feature of the game has got to be the graphics. Think Resident Evil set in a fantastically lush fantasy/forest setting, minus the zombies, and you'll be close. With more than 600 prerendered backgrounds and highly detailed polygonal characters, Jade Cocoon is probably the only RPG that can go toe-to-visual-toe with something like Final Fantasy VIII. With a gorgeous animated intro and in-game cutscenes that use the game engine, Jade Cocoon is easily one of the best-looking games of the year. Adding to the wonderful visual approach is the added replay value of the game. Even after the 40-plus hour adventure is completed, gamers will be able to continue enjoying Jade Cocoon via the arena mode and the hunting mode. Arena mode lets friends battle against one another using the monsters they've saved to memory card, while hunting mode lets players continue to search for monsters that weren't available during the regular quest. Lastly, the sound effects are quite effective in their spell-casting, monster-grunting ways and are complemented by a rich soundtrack.

For gamers disappointed by recent Monster Rancher wannabes like Dragon Seed, Jade Cocoon will most likely prove to be a success while dazzling others not familiar with the genre. Now that the game has finally arrived on our fertile shores, anyone looking for a substantial, if mildly repetitive, dose of monster-breeding, would do well to try Genki's effort. 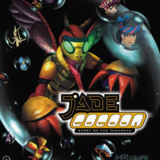