Held captive in a cave by soldiers armed to the teeth with weapons of his own design, Tony Stark ponders his fate. Faced with the ugly truth about the world he has helped create, he resolves to turn his genius to other purposes. Stark constructs a high-tech suit of armor and becomes Iron Man, embarking on a quest to ferret out the evil fueled by his creations and salvage his shameful family legacy. Iron Man, a game recently released in conjunction with the feature film, parallels Tony Stark's plight. Iron Man dons the high-tech suit of wide-open game spaces and shiny visual effects and tries to leave the old stigma of movie-based video games behind. Zooming around and blowing up stuff does have its thrills, but that new-suit shine grows dull about halfway through the game as the difficulty spikes drastically while the level design flatlines. After that, there's just no reviving Iron Man.

Iron Man begins in the cave where Tony Stark constructs the rudimentary rough draft of what will evolve into the iconic hot-rod red and gold suit. After his escape, the plot diverges from that of the movie, following similar themes while pitting Iron Man against a host of enemies that fans may recognize from the comics. Levels are bookended by cinematic cutscenes that generally show a little bit of character interaction and then a lot of Iron Man flying hither and yon. Only Robert Downey Jr. and Terrence Howard have lent their voices and likenesses to the game, and their performances, like the cutscenes themselves, are adequate.

After the initial, linear tutorial level, Iron Man is set loose into open battlefields for every subsequent mission. Flying around these large spaces is one of the more entertaining bits in the game, given that they are satisfyingly big and look quite good while you're screaming around them at high speeds. On most levels, the terrain is thoroughly contoured and provides plenty of opportunities for flying low through valleys or ducking behind ridges to evade enemy fire. With detailed suit animations that help bolster the sense of speed, Iron Man is at his best when flying into or out of battle.

Actual combat is a different story. Of the myriad martial means at Iron Man's disposal, the missiles and repulsor beam are the most useful, but also the least exciting. It's difficult to take on groups of enemies while flying; not only will you soon pass them by, but you'll also likely stir up more enemies while coming back around for another pass. As a result, the most efficient way to deal destruction is to hover in the air near your foes, firing repulsors constantly, shooting your missiles whenever they recharge, and dodging the constant barrage of incoming missiles. It's a shame that a game with such wide-open spaces steers you toward such a limited combat style, but it's really the only way to succeed against the brutal difficulty of the second half of the game.

Iron Man's other weapon, the unibeam, is very powerful but takes precious stationary seconds to charge up, seconds that you rarely have. As you beat levels and upgrade your suit tech, this charging time shrinks. You can also reroute your auxiliary suit power to direct extra juice to your weapons, but that power is best reserved for boosting your life support. Even with these tweaks, the abrupt increase in difficulty shrinks your available charging windows down to almost nothing. Using the unibeam is doubly risky because it draws power from your suit, power that you'll constantly need to recharge your life meter. Five or six missiles to the chassis while attempting a unibeam charge are enough to force your suit to power down, which you want to avoid (especially later in the game) because you can recover from a power down only three times before failing the mission.

One amusing element of Iron Man's combat system is the ability to grapple enemies. When Iron Man is close to a foe, he can grab onto them, triggering the unit-specific grapple animation. Most of these require a spat of frantic button tapping or a timed button press, and they result in the spectacular destruction of that unit. Breaking helicopters in half and ripping the lids off of tanks is great fun the first few times, but eventually it becomes more of a hassle than it is worth. However, grappling missile batteries or howitzers is often worthwhile because this lets you control them for a few shots and take out a few stubborn enemies quickly. You can also grapple incoming missiles while in flight and throw them at whatever you like, which, in addition to making you feel like a rock star, is a powerful way to deal damage. Unfortunately, the timing is tricky to get down, so more often than not you'll receive a face full of missile for your troubles. Furthermore, later levels are so thick with missiles that in the time it takes to catch and release one, five more will have crashed into your head.

Iron Man is reasonably entertaining for a few hours, but then things turn sour. Each level follows the same template that has you taking out a few consecutive groups of targets, then moving on to deal with the superweapon or supervillain (sometimes both). This is fine for a handful of missions, but it quickly grows stale. You'll likely complete the first half of the game's 13 levels with relative ease, but the latter half is a totally different story. Enemies abruptly increase in number and become much tougher, and the air fills with enough missiles to cause a partial solar eclipse. Constant dodging and frequent retreat behind hillsides to recharge your health are essential survival tactics, and even elite evaders will experience their fair share of failure. With no checkpoints to break up the lengthy missions, failing is incredibly frustrating, and it'll take a strong measure of grim determination to soldier on to the end.

Beating certain levels will unlock them for play in the One Man Army mode. This places you in familiar level environs with a time limit and a number of enemies to kill. If you complete your goal, you will unlock one of five classic suits from the Iron Man comics, which you can then use should you choose to replay any level. These might delight Iron Man fans, but if you're really going to attempt levels again, the customizable Mark III suit that you use throughout the campaign is your best bet.

Iron Man makes a decent opening argument against the just-another-movie-game stigma. However, by smacking you with a punishing difficulty spike instead of striving for more complex mission structures, it sacrifices most of the goodwill it garners in the early going. Completing the game is a frustrating trial with no substantial reward, and even sympathetic jurors will have a hard time ruling in its favor. 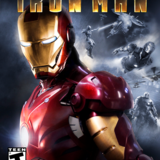