Iron Man 2 bungles its improvements and neuters its thrills, taking all the fun out of being a high-tech superhero.

Two years after his summer blockbuster tie-in game frustrated anyone unlucky enough to don the shiny red suit, Iron Man is back. The intervening years have given him time to reflect and settle down, making Iron Man 2 a more even-keeled experience than its predecessor. The punishing difficulty has been smoothed out, thanks in part to the sprinkling of checkpoints now featured in each level. Unfortunately, the exhilarating sense of speed that provided Iron Man's few thrills has also been phased out, leaving Iron Man 2 without any excitement to call its own. The few combat refinements create almost as many problems as they solve, and despite featuring a higher level of environmental detail than Iron Man, Iron Man 2 manages to look worse. Any improvements end up overshadowed by the ugly visuals and troubled gameplay, making this sequel even worse than its mediocre predecessor.

The story here is not the one you'll see in movie theaters, but it features some solid villainy and snarky banter. Unfortunately, the cutscenes that set up the action are poorly produced, and almost all of the character models look like wax-museum rejects. It may be interesting to hear Tony Stark (aka Iron Man) and James Rhodes (aka War Machine) plot about how to stop a serious threat, but it's very difficult to follow the action when you're half expecting the desiccated corpse of Don Cheadle to make a lunge for Robert Downey Jr.'s over-tanned head and try to gnaw out his tasty genius brains.

The lackluster visuals don't actively hinder you during gameplay, but they take a lot of the fun out of destroying legions of mechanical baddies when they don't even have the decency to explode well. Whether you are playing as Iron Man or War Machine (sometimes you have a choice, sometimes not), you blast your way through a lot of bad guys using missiles, lasers, and your trusty repulsors/minigun. Your weapons are effective, and the targeting system allows you to easily handle foes that are a few yards away. Moving your view around to take on a new enemy causes your reticle to automatically switch targets. But your enemies are generally mobile and they frequently change position to avoid your fire. Often times, your enemies will swarm in on you, and this creates a bad situation. As you slide your view to keep a moving enemy in your sights, another enemy can dart by and steal your reticle. This will yank your view away from your previous target, and the only way to reengage it is to tap a button to toggle targeting off, wheel around and find your target, then toggle targeting back on. Of course, if there is an enemy closer to you within your field of vision when you switch targeting back on, that enemy will be your new target, and your old one will get off scot-free.

These situations are disorienting and immensely frustrating, especially when you are trying to shoot a critical area of a boss enemy. Even worse, enemies can keep you hemmed in with melee attacks, forcing you to resort to tiresome punching and kicking to get clear of the crowd. Flailing your way through battle is time consuming and not very fun, so your best bet is to avoid getting swarmed altogether. Doing so successfully requires some vigorous hovering and dodging, which is the same repetitive and unexciting tactic that served as the most effective combat strategy in the first game. Despite a welcome tweak to the ludicrous missile bombardment (you can now repel a wave of missiles with one timely button press) and an impressive final boss, combat in Iron Man 2 is just as limited and unengaging as in Iron Man.

Your battles take place across a decent variety of detailed yet unattractive environments, including underground fortresses, tropical industrial sites, and an airborne battleship. Iron Man 2 forgoes the repetitive open-level mission structure of its predecessor in favor of more directed missions, which works in the game's favor. Missions feature a good mix of linear and open spaces, and the objectives feel reasonably varied. Alas, flying through open air and zipping through canyons is no longer enjoyable because the sense of speed is so weak. Cruising at normal speed feels like taking a leisurely Sunday drive, and even when you hit the afterburners, you get the feeling that cars would effortlessly pass you on the highway. So much for the thrill of flight.

There are eight missions total in Iron Man 2 (which you'll finish in much less than eight hours), each of which has checkpoints that help minimize the frustrations of combat. Between each mission, you can research more powerful weapons, modifications, and ammunition to improve your loadout, and these upgrades are helpful in the later stages of the game. Unfortunately, this customization system is buried in terrible menus that force you to blindly grope around until you figure out how to do what you want to do. The sloppiness of the menu system is reflective of the quality of Iron Man 2; every decent element is overshadowed by stumbles and shortcomings. It should be thrilling and fun to take to the sky in a superpowered battle suit, but Iron Man 2 crashes to the Earth with a dull thud.

View Comments (0)
Back To Top
4.5
Poor
About GameSpot Reviews 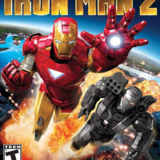 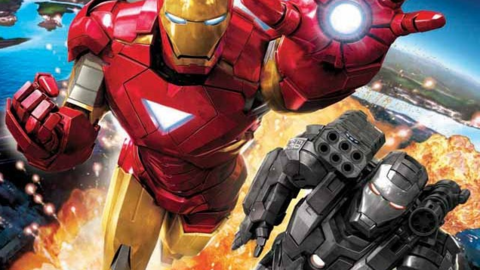 In Iron Man 2: The Video Game, gamers can choose to play as War Machine or Iron Man for both on-the-ground on in-air combat.