If one word had to be used to sum up Iron and Blood, "laughable" would fit just fine.

One would think a game bearing the Advanced Dungeons and Dragons license would at least be mildly entertaining. Instead, gamers get just a fighting game - and a bad one at that. If one word had to be used to sum up Iron and Blood, "laughable" would fit just fine.

Playing Iron and Blood is as painful as being hit over the head repeatedly with a blunt object. Character control is slow and unresponsive: Think of the type of game where it's hard to tell if the move you made was a special move or not (occasionally the announcer shouts "Combination!" to let you know you probably did something right). Campaign mode adds a team aspect, where you pick a series of characters and do battle with opposing forces. This is where artifacts come into play, which can enhance a character by making him stronger or faster, or bringing fallen compatriots back to life.

Onscreen, Iron and Blood looks like a real clunker. While still photos make it out to be a pretty sharp-dressed game, the motion is jerky and the camera angles are horrible. The game seems to be very fond of the behind-the-back view, which makes accurate player control a far-off dream. The back of the box boasts "Death strikes at 225,000 polygons per second," but fails to mention that the "death" is the player dying of sheer frustration.

The only point in favor of this game is character variety. You can pick from several different characters, including a headsman, complete with his head-chopper, an elf with his bow, a goblin with two short swords, or even Torgo, the one-armed dwarf who beats his opponents into submission with his giant hammer. Too bad they look better on the select screen menu than they do in the actual game.

This game could have been good. With some gameplay tweaks, a better sense of camera angling, and smoother motion, it would have been a hell of a fighter. Instead it is a bleak reminder that all polygon games aren't as smooth as Tekken 2. If someone attempts to pawn this game off on you, do yourself a favor and just say no. 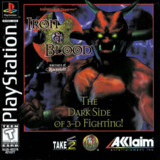