Iridion II is a great-looking shoot-'em-up that borrows many of its play nuances from the classics of yesteryear.

When the Game Boy Advance was introduced back in the summer of 2001, a shoot-'em-up game developed by German developer Shin'en managed to turn a lot of heads due to its ambitious implementation of 3D visuals along with a soundtrack composed entirely of digitized techno sound recordings. That game was Iridion 3D, and while it earned respect as a technical showcase for the GBA's media capabilities, it fell flat in terms of overall play design. Even so, Iridion 3D sparked enough interest to warrant a sequel, which Majesco and Shin'en have gladly provided with Iridion II. Iridion II is much better than Iridion 3D--not only is it a beautiful game, but it's also fun to play

The most obvious difference between Iridion 3D and Iridion II is that the perspective has been tilted and pulled back so that the game more closely resembles traditional vertically scrolling shoot-'em-ups. While this change does mean that enemy ships are smaller in size, the trade-off is that the developers have put more detail into everything that's shown onscreen. Enemy ships have wings and engines that flap and flare as they fly toward you. The gradual scaling effect is much more believable than it was in the first game, due to the wider variety of angles and roll maneuvers that each ship exhibits. The environment also plays a larger role in Iridion II--there are scaffold structures you need to avoid, rotating gates that you have to shoot open, and mines that explode if you fly too close to them. In some stages, there are gigantic motherships that occupy most of the screen, forcing you to skirt past them while dodging their gun turrets and exhaust vents.

Iridion 3D didn't really have much in the way of backgrounds--just a few flat, 2D backdrops. In Iridion II, the developers have taken the GBA's ability to play back and loop tiny video clips and used it to generate the trenches and planets you'll fly through in each level. These backdrops have a textured look to them that fits right in with the polygons and sprites used to create the objects and ships you'll see in the foreground. As a result, the action occurring in Iridion II doesn't look like it was pasted over flat, two-dimensional paintings.

Just as Iridion 3D borrowed its design from games like Star Fox and Space Harrier, Iridion II isn't altogether unique in how it plays--the comparisons to many of the classic shooters available for the Super NES and Genesis are inescapable. You control a lone ship set against an army of invading spacecraft. These enemies fly into view at the top of the screen, fire off their bullets, and typically perform some evasive maneuver as they fly out of view at the bottom of the screen. Your task is to dodge the bullets and destroy as many ships as possible. Midway throughout each level, and again at the end, you'll have to face off against large boss vessels. Your ship comes equipped with a modest shield that can protect it from a few bullets or a direct collision with one of the tinier vessels. Green pods scattered throughout each stage give you the opportunity to upgrade the six different weapons attached to your ship. Each weapon can be upgraded three times, although most players will probably stick to the traditional lasers or homing bullets--both because they're familiar and because they're powerful enough to stay competitive with the other weapons.

Although Iridion II isn't groundbreaking with respect to how it plays, it does bring many of the tried-and-true concepts of shoot-'em-ups together in a way that the first Iridion game failed to do. The pods that attach to your ship when you upgrade your weapons can block the majority of smaller bullets from reaching and depleting your energy shield. Each boss has a variety of movement patterns and attacks that force you to move to all areas of the screen. Your ship comes equipped with the ability to fire a supershot, which you perform by charging one of your weapons for a brief period, as well as the capacity to carry three powerful bombs that can clear the screen of enemies. If you play in the arcade mode, you can earn bonus multipliers that significantly improve your score. Iridion II isn't as difficult or unfair as the majority of shoot-'em-ups, but the sheer size and layout of each level nearly make up for this subjective lack of challenge. Most levels feel as though they're a bit too drawn out, but that also gives you the opportunity to appreciate the layout and design of the architecture moving toward you.

Another positive aspect of Iridion II is that it offers a nice "bang for your buck" ratio. The story mode has 15 levels that you can play at three different difficulty settings. For each level you complete in the story mode, you earn the ability to play that particular level in the arcade mode. Levels in the arcade mode have bonus multipliers and secret areas that aren't available in the story mode. Every time you finish a level in the arcade mode, you're given a code that you can input onto the publisher's Web site in order to compare your scores with those of other people around the globe. This isn't nearly as nice as a true two-player mode, but it's a good addition nevertheless. The game saves your progress by giving you five-character passwords to write down. The passwords are easy enough to copy down, but the lack of a battery save is still a minor disappointment.

Once you've fully completed the story mode, you'll unlock a challenge mode, a picture gallery, and a jukebox option. The challenge mode lets you fight against all of the game's bosses one after another. The jukebox is a particularly welcome bonus, because it allows you to listen to all of the sound effects and music in the game. While the various laser blasts and explosions aren't any better or worse than what you've heard in many other games, the music in Iridion II is a remarkable achievement. There are 23 different music tracks in the game, representing a variety of styles such as classical, '80s synth, and '90s techno. They're all full length, and the instrument separation is so clear that you can make out the sound of violins playing above a deep drumbeat.

If you enjoy space shoot-'em-ups, you can't go wrong with Iridion II. It looks gorgeous, sounds great, and plays at least as well as many of the classics of yesteryear. 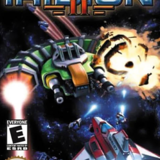