Where Interstate '76 was cohesive and involving, Interstate '82 feels unfocused and generic.

Interstate '82 is the sequel to Activision's MechWarrior-in-a-muscle-car game, Interstate '76. It takes place in 1982. Groove Champion, the hero of the original game, is missing, and it's up to his sister Skye and his old partner Taurus to find out what happened. Taurus has since traded in his vigilante lifestyle and his Afro for a more modern Miami Vice look. The rest of the cast shows off most early-to-mid-'80s fashion statements, from Mohawks to silk scarves. However, Interstate '82 simply doesn't stand up to the original because of its simplified gameplay, weak single-player opponents, and unreliable multiplayer mode.

The best feature in Interstate '82 is its story. The story is told through prerendered cutscenes and occasional mid-mission CB radio chatter. The voice work is really quite excellent throughout the game, from the villain that sounds like he's doing an impression of someone doing an impression of Christopher Walken to the hilarious overdubbed swear-substitutes, which give the entire game a B-movie-on-cable feel from beginning to end. In addition to the outstanding voice acting, the game also has some pretty good music, including three Devo tracks. The rest of the soundtrack is typical '80s new wave and fits pretty well.

The most notable new gameplay addition is the ability to leave your car and get into other cars. This opens up a whole world of possibilities because now you're never left waiting to die in an ammo-depleted, heavily damaged vehicle, and can simply hop out and look for a new ride. Of course, you're an easy target once you're on foot, and your pistol isn't very effective against a heavily armored car. A few missions also have switches and things that you must get out of your car to manipulate. In addition, unlike in the original, you'll be able to change cars several times throughout the course of the story mode, since you'll continue to the next mission with whatever car you used to finish the last mission. Each car has a different configuration of empty slots that let you add additional armor and weapons. Naturally, larger cars can accommodate larger weapons, like turreted machine guns and different types of "karpoons."

Interstate '82 comes with its own player-matching service, which connects you to a chat lobby and displays a list of available multiplayer games. It's easy to get into a game, but actually playing an Internet-based multiplayer game is a different story. Even if you've got a good ping to the server, you can expect plenty of choppy gameplay, delayed deaths, and all sorts of other problems.As a result, you'll want to stick to LAN play whenever possible. It's a shame, because the game has a few fun multiplayer modes, including the standard free-for-all, a capture-the-flag variant called capture the trout, and hot potato, in which you pass a bomb back and forth between cars until one player gets stuck with it and explodes. You can pick from any of the game's cars for multiplayer play, and you can arm and protect it in any way you see fit. Also, you can load the cars' paint jobs into your favorite graphics editor and customize their appearances. The custom paint jobs are sent to other players in multiplayer games, so you'll be able to share your detailing skills with others.

As far as the single-player mode is concerned, Interstate '82 has problems with enemy cars' artificial intelligence. Even on the hardest of the three difficulty settings, you can defeat most enemy cars by simply backing up in a straight line and gunning them down as they give chase. Granted, if you're supposed to be defending something, this tactic isn't as effective, but the AI's generally poor aim and its willingness to sit in your sights and take heavy fire make the single-player game easier than it should be. At least Interstate '82 controls pretty well, which makes it fairly easy for you to drive, target enemies, and select different weapons at the same time.

Interstate '82 looks fairly good but a little dated compared to other recent games that require 3D hardware. There's a fair amount of pop-up on the horizon and it isn't masked at all, so one second you'll be staring at the background texture, and suddenly a large wall will fade in. Although the game generally moves well, you never really get a good sense of speed in any of the available camera views, and the graphics aren't exactly dazzling anyway. The plain-looking in-car view is particularly ugly - it would have been nice to at least see your car's dashboard in the first-person perspective.

Such problems seem even worse when compared with the original game. Where Interstate '76 was cohesive and involving, Interstate '82 feels unfocused and generic - it's more than a mission pack, but less than a full-fledged sequel. If you're only interested in the continuing story, then it's definitely worthwhile. But if you're after a complete game, then you're better off with the original. 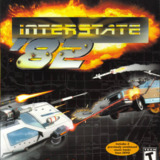