Innocent Life is a watered-down Harvest Moon game without the series' trademark depth and charm.

The Harvest Moon series of farming games has gradually grown a loyal following over the past decade, beginning with the series' inception on the Super Nintendo Entertainment System. Ten years and about 20 games later, publisher Natsume has brought its unique brand of life simulation to the PlayStation Portable, albeit with a slight twist. Instead of taking place on a rural farm that demands a lot of blood, sweat, and tears to grow and maintain, Innocent Life: A Futuristic Harvest Moon takes place on an isolated island in the near future. The basic Harvest Moon formula remains intact, but it has been overly simplified, and as a result Innocent Life lacks much of the depth and character of previous games in the series.

Innocent Life begins in the year 2022 on the small Heartflame Island, which is home to a handful of quirky residents and one large, ominous volcano. Legends and rumors have it that the volcano will one day erupt and destroy all life on the island. You play the game as a robot that was created by the sappily named Dr. Hope. As a robot, you can explore areas that are too dangerous for the human inhabitants to explore. It's up to you to investigate the reports of volcanic activity and solve the mystery of Heartflame Island. Also, you can show all the people of the island that good, old-fashioned farm work can produce crops that are every bit as good as the fully automated farms that have become the standard. Apparently having a robot do farm work doesn't count as automation as long as the robot looks like a young boy.

Instead of living on a sprawling farm, you live in crumbling ancient ruins, where you grow your crops and raise livestock. The ruins come equipped with plenty of luxuries you won't find in other Harvest Moon games. Growing and harvesting plants is as easy as tilling soil, planting seeds, watering them once a day, and then picking the fruits and vegetables and placing them in a bin to be whisked away to the market. Early in the game you earn a helper robot that will actually do everything but harvest the produce automatically, so you barely have to do anything at all. Even raising livestock is left to helper robots, so you don't have to do anything but sit back and cash in on the milk, eggs, and wool your animals produce each day. It's nice to have a break from the menial farming tasks that can take up a lot of time, but you'll feel like the game is on autopilot. As a result, much the challenge and basic gameplay of the Harvest Moon series is missing from Innocent Life.

There is a world beyond your farm, though. Heartflame Island is small, but there are caves and wilderness areas to explore in search of magic jewels. These jewels are required to progress the story, because by placing certain colored jewels on pedestals on your farm you break magic seals that block your way to certain areas on the island. Exploring dungeonlike caves is entertaining for a while, but it's not a rewarding experience. By placing jewels on your farm you can unlock new patches of soil so you can plant more crops. However, there's very little need to do that, because by the end of the first season you'll have more money than you could possibly spend. There's no reason to amass such wealth, either, because most of the items available for purchase are completely unnecessary. You can buy seeds, but all that gets you is more useless money. The important items that you actually need in order to progress the story are all either found or given to you for free.

Beyond farming and exploring, there's very little to do in Innocent Life. You can cook, but since you're a robot you don't actually need to eat as a human would. You can fish and harvest wild fruits, but there's little need to since you'll be making more than enough money off your farm anyway. There's also relatively little character interaction in Innocent Life. You can go through much of the game without visiting any of the other inhabitants of the island, and even if you do want to get to know some of your neighbors you'll find that they just aren't very interesting people. Innocent Life also does away with the courtship, marriage, and family elements that were integral to previous Harvest Moon games. The result is a game that lacks almost everything that makes Harvest Moon interesting and challenging.

At the very least, Innocent Life looks good on the PSP. The interface is kept simple, and you can do just about anything with a press of the triangle button. You don't have to spend an inordinate amount of time shuffling through menus or trying to locate items in your rucksack. The island looks good, with lush vegetation, sparkling rivers, and nice seasonal backdrops. The futuristic elements of the game appear in structures and items around your home and in town. None of it looks interesting or inspired, though, and it mostly consists of a lot of glass domes, conveyor belts, and pneumatic tubes. There's no voice work here, but you'll find the soft music to be easy on the ears.

If you're looking for a deep, complex life simulation for the PlayStation Portable, you'll be disappointed with Innocent Life. It can be satisfying at first to see your hard work bring valuable produce from a dusty patch of earth, but the sense of accomplishment quickly wears off. Some of the simplified processes offer a welcome break from the tedium of farm work, but Innocent Life is watered down to the point that it doesn't feel like much of a game anymore. 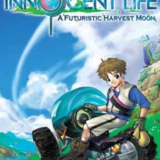 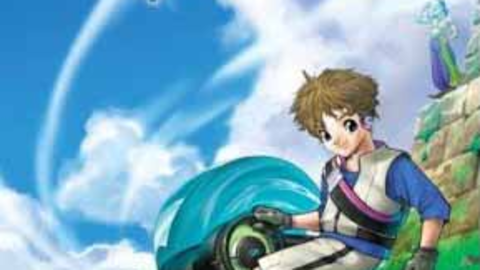 Innocent Life puts you on a small island with different areas that have different flora and terrain, as well as a new cast of characters.

7.2
Sign In to rate Innocent Life: A Futuristic Harvest Moon