If you can look past the lack of sound and graphics, you may be pleasantly surprised.

As the first company to design and release text-based adventure games, Infocom had a lock on solid adventure game design. Their games are indisputably among the most influential in the history of adventure gaming, with the Zork series, the Planetfall games, and the Enchanter trilogy being just a few of the notable entries in their now mythical catalog. Activision acquired Infocom in 1987, and have since made several attempts to cash in on the wealth of materials available. First, Activision released the three Lost Treasures of Infocom collections. Then the five original Zork games were released to bolster the success of Return to Zork. More recently, five separate collections of Infocom games were released, each categorized by genre (science fiction, mystery, adventure, etc.) and marketed under the dubious moniker "Interactive Fiction."

Now, Activision has finally gotten it right - or at least almost right. Nearly the entire Infocom catalog has been jammed onto a single CD-ROM, complete with extensive documentation and historical information. Unfortunately, the manuals and maps are stored as Adobe Acrobat files, which aren't nearly as useful as hard copies, and are occasionally impossible to read. In this collection, you get the hits (Zork), the misses (Plundered Hearts, anyone?), and the nearly-forgotten classics (Suspended, A Mind Forever Voyaging). You also get six new, albeit short, text-based games which hold their own rather well. The one thing you don't get, and this is a crying shame, is Hitchhiker's Guide to the Galaxy - perhaps the best Infocom game to ever grace a monochrome monitor. (A lesser-known Infocom game, Shogun, has also been excluded.)

I understand that the likelihood of you jumping from pure joy around the room at this point will undoubtedly be in direct proportion to whether or not you've played these games in the past. If you have, you should be ecstatic, because there are two major benefits to playing games you conquered years ago: 1) Reminiscing is fun, and 2) You feel like a freakin' genius as you solve some of the most dastardly puzzles in the history of gaming without even batting an eye.

For those who haven't played these games before, I don't know what to say. If you're looking for games that took 300 people to build and seven years to get the video to stream correctly, you've come to the wrong luau. But if you can look past the lack of sound and graphics (and we're talking total lack here; they don't call them "text-based" as a euphemism), you may be pleasantly surprised. The writers at Infocom, for the most part, were extremely adept at pulling you into the story, and most of these games have stood the test of time with grace. And with almost three dozen games, there are so many hours of potential gameplay here that even the most jaded puzzle solver won't find himself bored until at least the next millennium. 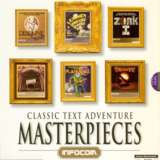