When you hear that Infinity Runner features werewolves in space, you might get excited by the goofy possibilities. But when you discover that Infinity Runner is a first-person Temple Run clone with a sci-fi setting, only it's not as good as that free-to-play smash hit, you would be forgiven if your excitement dropped drastically. This may be a reductive way to describe the game, but Infinity Runner is such a prototypical "runner" that it can't escape being compared to the many similar games that precede it.

Infinity Runner focuses on one thing only: running. That action is automatic, and you constantly move forward at a set speed whether you like it or not. Along the way, you encounter obstacles that you need to jump over, slide under, or strafe to the left or right of. There are only a handful of these obstacles throughout the game, so memorizing each is the key to success. For example, some corridors have lasers you have to leap over, while certain rooms have falling obstacles you must slide under. Some of these set pieces are appropriately dramatic when you first experience them, and when you tackle them correctly, there is an almost cinematic quality to the few seconds you spend sliding under an explosion or leaping over a collapsing bridge. But that feeling doesn't last, and you see each of these moments far too often for them to remain special. Jumping over a collapsing bridge in space looks cool once, but it gets silly if you see the exact same collapse twice more within minutes.

One of the more awkward aspects of the moment-to-moment gameplay is turning--something you do more often than anything else. As you approach a corner or intersection, you have to turn; otherwise, you crash into the wall. Since you automatically run in a straight line at all times, turning around corners is accomplished by looking in the direction you want to turn, either right or left. While easy from a gameplay perspective, it neither looks nor feels natural.

Sometimes you encounter enemies that you fight rather than dodge. The action slows to a crawl as you are presented with a quick-time event, hitting buttons as prompts appear on the screen before the timer runs out. These sorts of events are rarely the shining moments of any game, but Infinity Runner's are particularly punishing: miss a button (or hit the wrong button by mistake), and you immediately die. You get used to the punishment, and even enjoy the superficial fun. As the action speeds up and you get into a rhythm, running can be enjoyable if rote. But Infinity Runner's biggest problem isn't its lack of obstacle variety or progression. It's not that every path is a straight line and none of the scenery is very interesting (much less graphically impressive). It's that many instances aren't challenging; they're simply unfair.

Jumping over a collapsing bridge in space looks cool once, but it gets silly if you see the exact same collapse twice more within minutes.

On a couple of occasions, for instance, I came out of the game's werewolf mode (a form of near invincibility that is accessed with a power-up) to encounter an obstacle that was impossible to avoid due to the timing required and the lack of control I had as the transformation took place. The game's wall-run sections also cause much grief, because the in-game tutorial is not good at explaining the timing or even the button order necessary to pull them off.

Oddly enough, were it not for these frustrations, Infinity Runner would be too easy. Too often you end up automatically running through a set of empty rooms and corridors, occasionally turning around corners or dodging easy obstacles, and few set pieces present a worthwhile challenge. Several jumps require timing that's too tight, but many are too forgiving, which makes for an uneven and unsatisfying experience. You might run for seven minutes straight without breaking a sweat, only to lose a life in a corridor that's far more punishing than anything around it.

As you run, you must also collect data packets, which can be found in straight lines in many of the areas you dash through. Aside from contributing to your score, these do nothing, making them feel pointless and not worth the occasional risk they present. In similar games, such collectibles might be used as currency to buy items or upgrades, thus leading to higher scores in later runs. Here, there is never any carrot on a stick to aim for, unless you care about challenging yourself with high scores.

While Infinity Runner stays true to its name by providing an Infinite (that is, endless) running mode, it also has a story mode that is broken up into 14 stages across the game's seven environments. Infinity Runner's story mode feels like an attempt to stand out from the increasingly crowded subgenre of Temple Run clones, but instead of giving the game a boost of speed, it falls flat. It's unfortunate that a story involving werewolves in space can't be at least a little bit exciting, but the cliched plot ranges from uninteresting to bad. On occasion, it doesn't even make sense. For example, at the end of one level, you're attacked by a werewolf, and things look dire. When you begin the next level, however, you wake up somewhere else, perfectly fine, with no explanation.

Even if you find yourself caring about the story, prepare to be disappointed by its conclusion (or lack thereof). After bluntly alluding--repeatedly--to the fact that the only speaking character hasn't been entirely truthful with you, and providing multiple instances of a conversation being cut off before the truth can come out, the game ends by saying "to be continued." But if the planned sequel isn't drastically different from this game, I don't see much reason to pay more money when better running experiences can be had for cheaper prices.

The game also tries to do something a bit new with a 32-player competitive race mode, but even after the game's release on Steam, it's impossible to find an online match. The basics are exactly the same as in the single-player game, except that you race against other players for things like score or distance. The biggest change is that you can collect new power-ups that may hinder opposing players, such as one power-up that sends a werewolf to attack competitors and hopefully knock them back to an earlier checkpoint. This is an interesting idea, but without an online community, it remains untapped.

At its best, Infinity Runner is fine and functional. But it fails to successfully differentiate itself from other games of its type, many of which are cheaper, if not free. Story mode is an interesting idea, but it's over in a couple of hours or less and isn't a satisfying journey. It's a shame, but Infinity Runner trips over itself too often to pick up any speed.

View Comments (17)
Back To Top
5
Mediocre
About GameSpot Reviews 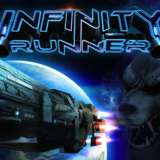 Britton Peele spent more time than he would like to admit playing Temple Run 2 and has played enough Canabalt to know that he's not very good at Canabalt. He finished Infinity Runner's story one and a half times and earned a majority of its achievements before writing this review.