A stab in the dark.

Of all the many thousands of games to hit iOS over the years, Infinity Blade and Infinity Blade II were among the few that aspired to be something greater than mere mobile games. Their visuals were--and indeed still are--some of the most impressive to grace the platform, and both offered a surprising amount of depth behind their flashy touchscreen swordplay. But they knew their limitations. With Infinity Blade III, the series makes a bigger play towards the grand spectacle of the AAA experience, and in doing so leaves behind its streamlined mobile mechanics. The core combat is still uniquely entertaining, but it's buried beneath layers of bloated mechanics, hub screens, and a near impenetrable story.

Trying to make sense of Siris' sprawling journey to kill The Worker of Secrets is nigh on impossible without having read up on previous games in the series and their tie-in novels--and even then the disjointed storytelling means you're hard pushed to fathom exactly what's going on. It's best to just soak up the atmosphere afforded by the gravelly voice acting and the suitably moody score and plough straight into the action. Thankfully, not much has changed on that front, and the combat remains as meaty and satisfying as ever.

Infinity Blade plays very much like a fancy version of Nintendo's Punch-Out, with swords and shields taking the place of boxing gloves, and giant fantastical knights and beasts making up for a lack of Mike Tyson. You march up to an opponent and deftly avoid its rhythmic attacks with a range of dodges, blocks, and parries to wear it down, before unleashing a few moves of your own by swiping at the touchscreen. It's an elegant system that plays to the immediacy of a touchscreen, making battles a joy to fight through.

The twist is that you can now fight as the female assassin Isa as well as Siris. But while her fast-paced, crossbow-infused combat looks different, mechanically it's exactly the same as fighting as Siris. This renders the ability to play through levels again as a different character a pointless endeavour, particularly because it's better to focus your efforts on levelling up just one of the pair to tackle stronger monsters. The levelling system is far more complex than in previous instalments, giving you all kinds of options for increasing baseline stats, customizing weapons, and crafting new items.

This added complexity doesn't always mesh with the straightforward nature of the combat, and I spent much time wishing I didn't have to worry about such things and could get straight back to the action. It doesn't help that many of the new levelling options have taken on some of mobile gaming's worst traits, including a cooldown time during crafting that can take hours to complete. You can speed things up with gold coins that you collect during the course of the game, but there aren't a lot of those to go around, so if you're really impatient, you can delve into the App Store to purchase more.

Whether you actually need to is arguable, though. Crafting new items or purchasing new weapons takes much of the challenge out of the combat, and for a game where the combat is the main draw, that's not an appealing proposition. The balance between a self-contained experience and a freemium one hasn't been reached here; it's as though the complex levelling system and in-app purchases are there to bulk up the combat, rather than add anything meaningful to it. Similarly, the base from which you select missions is an unnecessary addition, making it take longer to get into the action, and ruining the exploration that was an important part of Infinity Blade III's predecessors.

Such bloat is indicative of a game that's constrained by the limitations of its original design where additional features intended to expand the experience simply don't gel with its combat. The charm of Infinity Blade always lay in its ability to meld the instant gratification of a mobile game with the production values of a console game. But by veering too far from its roots, Infinity Blade III loses its punchiness in an adventure far too sprawling to be supported by its fighting system alone. 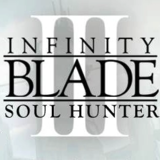 Mark has been on the mobile games bandwagon since the launch of the App Store, and reviewed the excellent Infinity Blade II. He sunk around 10-hours of his commuting time into Infinity Blade III for this review.