Ruthless neon on the wet streets.

In Infamous: Second Son, leading dudebro Delsin Rowe made little attempt to disguise his newfound powers; in fact, he reveled in them, delighting in the destruction available at his fingertips. Given Delsin's penchant for calling attention to himself by spray-painting street art on public property, such exuberance is unsurprising: he's a self-described rebel wearing a beanie and a denim vest, the kind of anti-establishment cliche born of focus-group testing and savvy marketing. If Delsin were a Simpsons character, he'd be Poochie.

I didn't care for Delsin very much.

Aside from his appearance as a playable character in its challenge levels, Delsin has no meaningful role to play in Infamous: First Light, which is just as well, since resident dirtbag Shane has masculine bravado to spare. Shane certainly has no qualms subjecting First Light heroine Abigail 'Fetch' Walker to his loathsome pick-up lines and sexist drivel, an uncomfortable and heavy-handed story device designed to make Fetch a sympathetic lead from the get-go, as if her depressing backstory as a runaway were not humanizing enough. Fetch herself fulfills the role the plot expects of her--the street-smart young woman learning how to channel her rage into the superpowers she was once afraid of revealing. It's not the ham-fisted dialogue that makes Fetch so appealing, nor the by-the-numbers story she stars in, but rather actress Laura Bailey's nuanced and emotional performance, as well as Fetch's beautifully animated face.

Spending time with Fetch is a delight, which makes it a pity the story missions tie her down with so many limitations. As the plot leads you through its predictable beats, you improve powers and gain access to new ones by completing missions, collecting glowing shards scattered around Seattle, and performing a few mundane side tasks, such as preventing drive-by shootings--which actually just means beating up a few criminals or blowing up their vehicle until all of the hooligans are dead. Fetch's neon-based abilities allow her to speed through the city as a ray of light, enclose enemy agents in stasis bubbles, and create a gravitational singularity that sucks in nearby enemies and then detonates with a burst of light and limbs. And yet a good portion of the story tasks are boring sniper missions that bolt you on rooftops and have you firing neon at the shooting gallery underneath you. What a waste of Fetch's talents.

Where Second Son flourished--and where First Light also impresses--is in the fluidity of the interactions. Speeding through Seattle is a breakneck delight, particularly when you rush through one of the countless neon vortexes scattered about and pick up an additional speed boost. Seattle is a playground, and the collectible shards that improve your powers have you scurrying up skyscrapers and floating from rooftops. This is the same vibrant, high-fidelity version of Seattle that made Second Son such a fine showcase of the PlayStation 4's capabilities. There are no frame rate hitches to distract you, and there is little textural pop-in to grab your attention. It is you and the city. Obstacles are easily surmounted, making Seattle's borders the only notable boundary to your freeform exploration.

It doesn't take long to exhaust the supply of easy secondary activities, which is just as well: as wonderful as it feels to interact with Infamous: First Light, the game simply goes through the open-world motions. The morality system that makes the series stand apart is missing from action here, so the only guiding principles are your own, not the game's. You occasionally have the option to enchain guards and gangsters that try to flee the scene after you've wreaked havoc, but there is no reason to choose peace over murder: First Light is typically concerned only with its own neon fireworks. Given the way Delsin fully embraced his living power fantasy, it's ironic that his story would allow a (sort of) noble path, when the more conscientious Fetch is allowed no such redemption. First Light also displays the symptoms of retroactive continuity: several specifics of this story deviate from the details described in Second Son.

It's not in the open world, but in the challenge rooms, where Fetch is most able to let loose. Again, First Light is going through the motions here: you either fight progressively stronger waves of digital enemies, or you do so while rescuing the innocents they threaten. Zipping from corner to corner, blasting Department of Unified Protection guards and digital demons, is an absolute blast, at least before you earn the game's full complement of neon powers, some of which do not unlock until you finish the story. The freedom of movement, the ease with which you can chain melee attacks together, the responsiveness of the controls: all of these attributes combine into a silky smooth demonstration of otherworldly skill.

The time comes, however, when you learn how to exploit your powers and earn ultra-high arena scores. Once you've earned sufficiently potent and plentiful homing missiles, you needn't worry too much about exercising a full range of abilities. Instead, you can simply zip from one neon source to another, filling up on juice and spamming enemies with missiles until you are able to summon your colossal singularity and vaporize your attackers. On every level, I easily earned diamond-level scores, the highest you can receive, using this technique. Several times I allowed myself to die just because I'd gone for 45 minutes and had grown more than bored by the process. Combat is far too easy to abuse, and without tension, the battles have no sting.

Nevertheless, Infamous: First Light proves itself a serviceable time waster. Fetch is an engaging character, troubled yet intensely loyal, and though her story arc recalls more video games, film, and anime than I care to count, she still commands your attention. I spent about six hours with her in total, and managed a 100-percent playthrough in the process; if you're just in it for the story, you could probably zap your way through in around two hours. Given Second Son's greatness, I had hoped for something more than a time-waster, but this Infamous has no bite.

View Comments (200)
Back To Top
6
Fair
About GameSpot Reviews 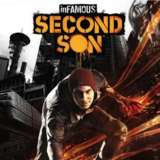 Kevin VanOrd finished Infamous: Second Son earlier this year. In First Light, he earned diamond-level scores in every battle arena, earned every power, finished the story, and performed every side activity.