While the realistic driving model is unquestionably IndyCar II's greatest strength, it is, at the same time, the game's greatest weakness.

Let me start by saying that IndyCar Racing II from Papyrus software is undoubtedly the most realistic racing simulation of all time. Unfortunately, this same realism makes IndyCar II the most difficult and unforgiving racing simulation of all time. As a result, gamers looking for a quick and easy racing game are advised to look elsewhere—only the most passionate drivers need apply here.

While the realistic driving model is unquestionably IndyCar II's greatest strength, it is, at the same time, the game's greatest weakness. Even on the easiest of settings, driving an IndyCar is comparable to riding a wild bull. Just a light tap on the accelerator can send the uninitiated careening out of control, and transform a $1 million car into $5 worth of scrap metal. In fact, it will take literally hours of practice for novice players to complete a single lap in pace-setting time. In a perfect world, Papyrus would have offered several driving algorithms to ease drivers into the more complex model. But as it is, you'll just have to practice, practice, practice.

It takes more than excellent driving skills to make a winning team—it also takes a fast car. To this end, IndyCar II features the most comprehensive garage seen yet in a video game. Almost every nut and bolt on the player's car can be modified in some way, and each modification has a measurable impact on track performance. Finding the optimum balance for each track is an art, and testing various configurations can easily take all afternoon.

For those with the stamina to conquer the steep learning curve, IndyCar II offers plenty of intense racing action. White-knuckle acceleration, death-defying speeds, and stupendous pileups all add up to some serious fun. In addition, simply completing a race brings on a sense of accomplishment few other games can match. (After all, you've worked very hard to get here, so why not celebrate a little?)

While the core gameplay remains exactly identical, the new Windows 95 version of IndyCar II offers a few improvements over its DOS-based sibling. Most notably, the user interface has been improved with the addition of pull down menus and radio buttons common to Windows 95 programs. In the graphics arena, owners of fast Windows accelerators may notice some modest improvements in the overall SVGA framerate, but I noticed very little difference with my Cirrus Logic 5434. If you have anything less than a Pentium 166, you will still have to switch off graphic options to maintain an acceptable SVGA framerate.

In summary, IndyCar II will certainly appeal to diehard racing enthusiasts, and to this group I will heartily recommend this product. Be warned, however: most casual gamers will find IndyCar II simply too difficult to be fun, 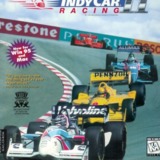