Industry Giant II is ultimately a graphical front end for a clumsy and frustrating spreadsheet.

1997's Industry Giant was a grand, sprawling business game brought over from Austria by the now defunct Interactive Magic. Now its sequel has landed on North American shores, courtesy of its developer-turned-publisher JoWood, and the sequel has even more grandeur, breadth, and business, though not in equal measure. In fact, Industry Giant II may be a bit too broad for its own good.

In Industry Giant II, you make money by stringing together the elements of a long process that stretches from harvesting raw materials all the way to selling finished goods from a retail outlet. You even set up and manage transportation between each of the steps along the way. For instance, if you want to sell cars, it's not enough to simply build an automobile factory and a car dealership. Instead, you have to mine bauxite and ore, raise cattle for your leather seats, and use petroleum to make rubber for your tires, among other things. You also have to build and manage the train routes that carry the goods around and the warehouses where they're stored.

As you meet the demand for different goods in a city, the city grows and demand increases. You can even spend your money building structures that encourage faster city growth. The sequel adds a new feature: the accumulation of luxury points based on how well you're doing. As you accumulate luxury points, which also serve as a means of keeping score in some scenarios, you can buy increasingly lavish homes to place on the map. Random weather and economic events can shake things up from time to time. In some scenarios, you'll have to compete against other businesses that will cut into your market share by selling the same goods you are. As time passes (the game includes 80 years of industrial technology, from 1900 to 1980), new goods and industries are invented, expanding your options.

If you like business simulations, you'll probably find all this variety intriguing. Unfortunately, each of these industries is handled so abstractly that you might as well be dealing in "thingamajigs," "gewgaws," and "doodads." For instance, publishing a newspaper consists only of cutting down trees, processing the lumber at a sawmill, using the grain wood to make paper at a paper mill, and then making newspapers at a printing press before selling them at a bookstore. There are only the mechanics of manufacturing with none of the important nuances of publishing, such as circulation or advertising. In Industry Giant II, a newspaper is just a stack of pages, and the process of creating it is no different from the process of making canned fruit, skateboards, or aluminum ladders.

Managing your business is awkward at best. Matching supply and demand requires a lot of counting, clicking around and checking different buildings, and referring to reference screens. Because of this, the gameplay consists of working out the details of your elaborate industrial infrastructure while the game is paused. You can change settings for factory utilization and worker productivity to manage the flow of goods, but there's no convenient way to know in advance how much or how little of each product you need. When you add in the responsibility of setting up transportation routes for individual vehicles and their cargo, the whole process becomes even more difficult.

Once everything is set up and running, there's not a lot to do until something goes wrong. As if to keep you from getting bored, this happens fairly regularly in Industry Giant II, particularly as your business empire expands. You can expect everything to grind to a halt because a factory wasn't getting enough goods or because a warehouse was filled up with raw materials faster than a factory could process them. Warehouse management is a key factor in managing your business, but the process of taking control of your warehouses leaves a lot to be desired, even though JoWood apparently promises to improve warehouse management in an upcoming expansion pack.

Industry Giant II requires a lot of micromanagement. And although one man's micromanagement might be another man's deep gameplay, there are elements of Industry Giant II that would try even the most meticulous accountant's patience. For instance, agricultural industries operate on a yearly cycle, planting crops one month and then harvesting them later in the year. But unless you manually turn each farm off during the fallow seasons, you'll pay full salaries and maintenance costs. Vehicle routes are easy to set up, but when you have a breakdown, there's no way to tell what goods were being carried and where they were going. There is no printed reference for the different vehicles available, the goods required for various industries, or their profitability. Some of this can be found on JoWood's Web site, but this sort of game demands more-thorough documentation than JoWood has provided. Industry Giant II plays like a great big puzzle in which you can't tell whether the pieces fit until after you've placed them.

The campaign consists of a series of scenarios with gradually increasing difficulty levels. Alternately, you can play an "endless game," which is essentially a single-scenario skirmish game with your choice of starting conditions, goals, and opponents. Industry Giant II doesn't model competition very well. You can opt to share railroad tracks with another player, or you can buy his or her company if you have enough cash. But otherwise, the only interaction with other players is the reduced demand if you happen to be selling the same products in the same city, which doesn't make for a very exciting multiplayer game.

To its credit, Industry Giant II looks and sounds good. Because of the large icons that represent every product, it's easy to tell at a glance what goods are stockpiled in a warehouse or being carried on a train. If your factory is making engines, a large picture of an engine hovers over it. If your farm is producing wool, a large ball of yarn floats over it. The interface is limited to a tiny strip along the bottom of the screen, which apparently let JoWood focus more on the game's graphics engine. A mouse click brings up floating displays for building structures, managing vehicles, and tracking sales. The game's graphics themselves have a lot of charm and detail, from cars zipping around on the road to the undulating surf along the beach. At the game's closest zoom level, the graphics get a bit pixelated, but they still hold up. Zooming in and looking around will reveal little surprises like zeppelins, dolphins, and geese. The sound is a tasteful collection of ambient noises, including city traffic, twittering birds, and church bells, depending on where you're looking.

But games like this are really based on how gratifying it is to set up a business and watch it run and grow, and all the cute little killer whales and hang gliders and fireworks displays can't make up for the fact that Industry Giant II is ultimately a graphical front end for a clumsy and frustrating spreadsheet. 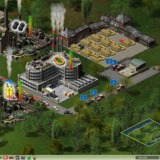 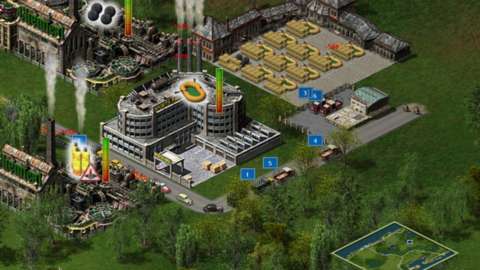 Industry Giant II is ultimately a graphical front end for a clumsy and frustrating spreadsheet.