Incoboto's unique puzzles and charming visuals mesh beautifully with the lonely tale to ensure you fall hopelessly in love with a boy and his sun.

Inco is alone. He is the sole being to occupy a universe bathed in darkness. Spheres of spectacular contraptions circle his home planet, each littered with messages of hope, fear, and outright lunacy; all of them are the last remnants of a society long extinct. Inco knows nothing of humankind's fate. He simply watches the world spin by through the eyes of a telescope, powerless to escape the solitude of his planetoid home.

But it's not to last. The darkness is soon replaced by beams of warming light as Helios, a smiling, childlike sun, appears. It's Inco's ticket to freedom and his way to uncover the truth about humankind. It's also the beginning of a journey that takes him to the very edge of the universe and you through one of the most utterly charming, thought-provoking, and clever puzzle games on the iOS.

Much of that comes down to the game's design, which apes the likes of Super Mario Galaxy, Braid, and Portal to form a unique take on a 2D puzzle platformer. Each level is made up of a series of small planetoids, on which are located sun gates. Helios' main skill is its ability to open those sun gates, which transforms them into portals that whisk Inco away from his home to faraway worlds. Of course, things are never that simple, and for Helios to open the gates, Inco must feed him star pieces that are scattered around each of the planetoids.

Some are easy to reach, with a just a few platforms standing in your way. Reaching them is as simple as touching and dragging where you want Inco to walk and swiping to jump. Because this is outer space, gravity's pull is weaker, and so Inco gracefully floats through the air, falling down to solid ground with a gentle thud. The slower motions give you time to adjust your positioning with gentle swipes, which makes it a beautifully smooth system and a wonderful fit for the touch screen.

Other star pieces require more than just simple platforming to grab. Many of the planetoids you visit are covered in weird and wonderful contraptions, which provide some brilliant puzzles for you to wrap your head around. Each plays with the physics of the planetoid you're on, as well as that of others, so you need to think big and work with several things at once to succeed. They start simple, such as puzzles where you activate switches with color-coded balls that you throw by dragging a line from Inco to your desired target.

Later levels introduce microportals, which work much like those in Portal. You need to think about what speed you enter them at and at what angle to reach those elusive star pieces. They're later combined with the aforementioned colored-ball switches for even trickier challenges. As you move from planetoid to planetoid, the puzzles get even more clever, introducing elements such as electricity charges used to lower force fields, springs that send you rocketing out of the stratosphere, and gravity beams that test your sense of spatial awareness. There's Helios' focus ability too, which allows you to direct its sun beams and activate special switches by pinching the screen or by pinching and swiping to uncover hidden objects.

But it's when those elements are combined that the puzzles get really special, and really challenging. You might have to hit some timed levers to deactive a force field, quickly leap out of a portal into a gravity beam, and then spring onto another moving planetoid to reach a star peice, all before the timer runs down and reactivates the force field. The solutions aren't easy to come by, but there's a logic to them that never makes them frustrating, and really satisfying to solve.

Some star pieces aren't reachable on your first visit to a planetoid because each ability is introduced gradually as you progress. The spot-on pacing, though, introduces new abilities and puzzle types long before you grow tired of them. The narrative plays a big role in that too. The mystery surrounding humankind's disappearance is teased via a variety of signposts left by something known only as "The Corporation," willing you onward. The Corporation's complete disregard for the value of human life is balanced out by a wry sense of humor that's very witty and leads to some real laugh-out-loud moments.

Indeed, many of its slogans, such as "The Corporation: You Paid for Your Security With Your Freedom," "The Corporation: Telling It to You Like It Is…From Our Perspective," and "The Corporation: Litigation Before Logic," can be tweeted out directly from the game, if you're so inclined. Meanwhile, the skeletal remains of dead humans lend an emotional edge to the story. Their last words speak of torment at the hands of The Corporation and of a dying sun, all told via broken notes laid next to their remains. They sometimes provide hints toward puzzles too, should you get stuck.

It's a real shame that despite tales of a corporate conspiracy, missing suns, and hints at a big reveal, it all ends rather abruptly, without much in the way of an explanation. You're left knowing as much about the universe as you did when you started, which is a little frustrating. But then, your journey up to that point is one of great design, witty writing, and charming visuals that capture your imagination. Some fantastic avant-garde electronica backs your journey, too, adding to the serene loneliness of the deserted universe.

Sharing in Inco's journey with his ever-smiling companion Helios is both joyful and thoughtful; their companionship sees them through the devastation that's befallen the universe and helps them work toward putting it right again. Incoboto is a game that plays to the strengths of the platform, without resorting to repeating the success of others like so many mobile games. As a show piece for creativity and great design, it's impressive. But, more than that, it's a brilliantly put together game, which provides hours of enjoyment for a very modest outlay. 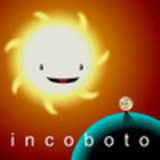