iM1A2's complexity and realism will certainly appeal to simulation wonks, while the intense real-time strategy should endear it to the hearts of strategic wargamers.

As with its predecessor, iM1A2 places you in direct command of four American M1 battle tanks. As the platoon leader, you can either direct the action from the relative safety of the map view, or you can hop in and take direct control of any tank within your platoon. Once inside a tank, you can act as driver, commander, or gunner at any time, while the computer automatically controls the other positions. Be warned, however, that since each member of the crew has his own realistic crew station, successfully commanding your vehicle in combat requires that you master four very different battle stations (and be able to switch among them on the fly). While true simulation aficionados will undoubtedly delight in this complexity, those looking for a quick dose of adrenaline may find the learning curve a bit steep.

Once you have mastered the fine art of driving and firing an individual battle tank, it is time to test your skill at coordinating an entire company in combat. To this end, iM1A2 provides an overhead map from which you can issue orders to not only your own tank platoon, but also multiple support units. These support units can include various forms of artillery, mechanized infantry, air defense units, and attack aircraft. Although you cannot assume direct control of these units, you can assign waypoints and issue basic orders such as "advance," "retreat," and "attack target." Since each of these support units share the same strengths and weakness as their real world counterparts, learning how to effectively deploy each (and bring them back in one piece) is the key to winning a campaign.

After learning how to coordinate attacks from multiple units in real time, you are finally ready to take on your computerized adversary. Unfortunately, the iM1A2's artificial intelligence relies almost exclusively on brute force tactics - causing most battles to quickly devolve into battles of attrition. As a result, the computerized opposition can quickly decimate an unwary commander's army - but the commander will rarely be surprised. Fortunately, armchair warriors wishing to engage in a little subterfuge can battle it out head-to-head over IPX network, modem, and (coming soon) Internet play via Mplayer and iMagic Online.

For all of its outstanding features, however, this tank does have a few chinks in its armor. In sharp contrast to the beautifully drawn interior bitmaps, the external polygon visuals appear blocky and cluttered. In fact, the terrain is so poorly rendered that it is almost impossible to discern height and depth characteristics even a few yards in front of your tank. This problem is so bad that often the only way to tell if there is a blind spot in the terrain ahead is to order a vehicle over it and see if it disappears from view. As a result, iM1A2's graphics are not only ugly, but potentially deadly as well.

Ultimately, Interactive Magic deserves credit for producing the first quality tank simulation in over seven years. iM1A2's complexity and realism will certainly appeal to simulation wonks, while the intense real-time strategy should endear it to the hearts of strategic wargamers. Sadly, however, a shoddy graphics engine prevents it from scoring a direct hit with a wider audience. 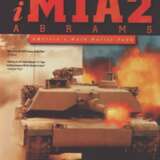