Fans of space shooters owe themselves the opportunity to play Ikaruga, a game that was designed both to impress their sensibilities and to challenge every ounce of their being.

Back before the term "shooter" was used to refer to games like Doom, Medal of Honor, and Halo, it referred to games like Xevious, Life Force, and Raiden. This genre of gaming was a large part of what made video arcades so popular in the '80s and into the '90s, and for a while, the shooter epitomized gaming in general. After all, these games were all about testing your skills and reflexes to the limits and also about making you feel pretty special about yourself what with being humanity's last, best hope against huge alien fleets and all. Invariably, arcade shooters were designed to suck up your hard-earned quarters as well as to let you have some fun taking on evil aliens. The genre seems long dead now, though, since the intuitive dodge-and-shoot mechanics of classic space shooters seem overly simplistic compared with the complex 3D games of today. Shooters also tended to be very short, even by yesteryear's standards. But along comes Ikaruga, a traditional space shooter with an innovative twist and some undeniably stylish production values, to single-handedly prove that games like this are still as enjoyable as ever.

Like many space shooters, Ikaruga was first released in arcades, though it never saw the light of day in this country. For that matter, neither will the recently released home version of the game, which is available only in Japan and for the Dreamcast system (though a GameCube version was also recently announced). It's almost as if Treasure, Ikaruga's distinguished developer, is deliberately trying to limit its audience to a core group of enthusiasts. That's perhaps not as absurd of an idea as it might seem, since Ikaruga is truly a shooter fan's shooter. It follows many of the genre's 20-year-old conventions, and you'll find it very challenging even if you've been playing games of this sort all your life. If you have, then the game's classical design and its high level of difficulty will also happen to be two of the things you'll invariably like best about it. Yet even those who aren't particular fans of space shooters would undoubtedly appreciate a lot of what Ikaruga has to offer.

The plot of Ikaruga is, for all intents and purposes, the same as the plot of every other space shooter ever made. Basically, it's the future and you're civilization's last hope. You've got a high-powered spacecraft with unlimited ammo, but your enemies have entire armadas of killing machines, and you're their only target. Ikaruga actually has an optional simultaneous two-player mode, so it doesn't have to be just you against the world, but still--you get the idea. The game consists of only five vertically scrolling stages, but offers three distinctly different difficulty settings and a decent number of unlockable extra features. Considering how apparently short the game is, you'll find that Ikaruga actually has a surprising amount of depth. Like with many great games, this depth isn't readily apparent at first due to the game's seeming simplicity and quickly familiar controls, but spend some time with Ikaruga and you'll find in it an action game that actually forces you to think on your feet, constantly.

The gameplay has a few twists, but one of them, a concept first introduced in Treasure's own Sega Saturn side-scroller, Silhouette Mirage, is especially noteworthy: Every enemy in the game is either light or dark colored, and your little spaceship has both a light surface and a dark form as well, which you can switch between at any time. These two forms are identical, except for the color of your ship and its energy blasts. The thing is, you can absorb same-colored energy, and only enemy fire of the opposite color can ever hurt you. For more than 20 years, the object of every space shooter has been to avoid absolutely everything on the screen, except maybe the occasional power-up, while returning fire. Ikaruga effectively disposes of this time-honored tradition by forcing you to train yourself to avoid only one type of enemy firepower at a time.

It's not as straightforward as it sounds, though. You'll gradually realize three things: One, that absorbing same-colored energy is actually a good thing, because you stock up that energy to unleash a devastating homing laser attack--your only alternative to your basic rapid-fire energy shots. Two, that there are no power-ups in Ikaruga. Get used to the basic capabilities of your ship, because the game was fundamentally designed to push them to their limits. It seems disappointing at first that there are no superpowered weapons or defenses to be picked up, but you'll realize that this was only to ensure that Ikaruga remains a skill-based game every second of the way. And three, that shooting an enemy with the opposite-colored energy deals double damage. Obviously, though, the disadvantage of doing this is that you yourself will be vulnerable to the enemy's opposite-colored firepower, and in Ikaruga, when you take a hit, you die. So matching your enemies' color is the way to play it safe, while changing to the opposite color is the riskier, faster way to take out the opposition. In reality, you'll be switching colors often, and in the later stages of the game, almost constantly. The screen often fills with a withering hail of enemy fire, and only by quickly and precisely switching between light and dark will you survive.

You'll need to consider a few other factors. Crashing into anything has lethal results regardless of your ship's color. And, at the default difficulty setting, destroying a same-colored enemy causes that enemy to send a burst of same-colored energy hurtling toward you from out of the explosion. Again, usually that's a good thing, as it helps you quickly charge your homing lasers. Though the idea of dealing double damage using the opposite color may sound nice, the prospect of keeping those homing lasers constantly ready for action is a viable alternative. But it's not that simple: Since you'll have to change colors frequently, you'll need to be very careful about what you're shooting at as you're switching colors. It's very easy to die in Ikaruga by switching colors and getting hit by an energy bolt when you would have absorbed it a split-second earlier.

So, then, Ikaruga achieves the impossible: It's an accessible, over-the-top, extremely intense, highly challenging, utterly action-packed space shooter, but one that demands the utmost of care and restraint on behalf of the player. As if to further encourage you to choose your shots carefully rather than to just blindly keep firing, the game features a combo system that rewards you exponential point bonuses when you manage to destroy same-colored enemies in groups of three at a time. Racking up massive combos is a real challenge (and by no means a requirement) amid the chaos of the game, but it's perfectly possible and helps you earn yourself some much-needed extra lives, as well as bragging rights. Ikaruga is one of those games where you'll care about your score. After barely managing to shoot your way through a given level, only to be awarded with a C grade for your lackluster efforts, you'll feel compelled to try again and do better the next time.

You'll be trying again a lot. Though the pattern of your enemies is identical each time you play (though with slight variations depending on difficulty level), and the five levels are all relatively short, that's not really detrimental to the game. Realistically, you'll need to memorize what happens and when during these stages in order to survive them. Only with a precise moment-by-moment knowledge of what's to come will you manage to come out on top, and possibly, not even then. If the idea of meticulously memorizing each level's layout and the pattern of each wave of enemies seems unappealing to you, remember that virtually all action games rely heavily on pattern recognition--Ikaruga is just more honest about it. The game isn't padded with the sort of stuff you'd never want to play through more than once, and since it's fundamentally a skill-based game, you'll appreciate replaying the same sequences just to witness yourself getting better and better and blasting through them.

You won't finish Ikaruga for a while--certainly not in your first few sittings. Though you can set the game to give you from one to five lives, initially you're limited to three chances to continue play--like having three extra quarters in your pocket. If you save your progress, you'll notice that with each passing hour of gameplay, you'll be granted an additional continue, something that will eventually ensure your ability to get all the way through the game. Again, though, you'll appreciate being able to do this to the best of your ability, sustaining minimal losses while racking up seriously high scores. The three difficulty settings also provide considerable replay value (even the "easy" mode is hard), and the two-player mode also bears special attention.

The dynamic of playing Ikaruga with someone else is quite different from that of playing the game by yourself. You'll realize that new strategic possibilities as well as some new challenges open up in two-player mode, as one player will be able to serve as a defensive screen for the other, who can lay into his enemies for double damage in situations that would surely bring death in single-player mode. An interesting aspect of two-player Ikaruga is that player-controlled ships can actually bump one another. During some of the extremely close-quarters flying sequences in levels three and four, you'll suddenly find yourselves in desperate competition to keep from crashing into things.

Ikaruga is a beautiful game, featuring an inspired artistic design and smooth fully 3D graphics that are easily on par with the best graphics of any current platform. The muted background colors amid the violently scrolling scenery, coupled with the stark contrast between the blue-and-white light energy and red-and-black dark energy filling every screen, makes just looking at Ikaruga a mesmerizing experience. The otherworldly enemy designs are best exemplified by the game's huge, surreal boss ships, and you'll be treated to some truly stupendous, cataclysmic explosions whenever you manage to defeat one. The game also sounds great, featuring plenty of good audio effects that never overwhelm the highly effective synth-heavy soundtrack, which seems like a throwback to many of the great musical scores from past space shooters.

Fans of space shooters owe themselves the opportunity to play Ikaruga, a game that was designed both to impress their sensibilities and to challenge every ounce of their being. Yet anyone who appreciates what makes a truly great game should be able to recognize Ikaruga for its elegant design and aesthetic beauty. Make no mistake, it's not some wistful nostalgia for a bygone era of gaming that makes Ikaruga so appealing. Rather, it's the knowledge that Ikaruga takes 20 years of great ideas in game design and somehow manages to put an entirely new spin on them, not for novelty's sake, but only for the sake of making a game that's both familiar and utterly unique. 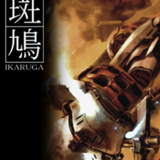