Iconoclasts' Metroidvania-inspired style and structure is deceptively simple at first. The vibrant 2D-pixelated world you inhabit is alluring and the action is quick and snappy. But if you've played games like this before, it'd be easy to dismiss Iconoclasts as trite and rudimentary considering the number of similar experiences available nowadays. Yet as you push through the game's myriad twists and turns, it matures before your very eyes, unfurling to reveal complex puzzles and a heart wrenching narrative.

Iconoclasts is a fantastic looking game with an impressive level of detail on display, a prime example being the unique animations and sounds each character exhibits. The presentation and catchy retro music elevates the personality of the world, making the game more captivating as a whole. However, judging Iconoclasts simply on the visuals undersells what's buried under the surface. There's much to love about this adventure: it's brimming with nuanced characters, riveting drama, sharp wit, and a host of well-crafted action set-pieces. Iconoclasts leverages its storytelling and presentation to pull you in. These elements distinguish the game from the old-school adventures it recalls, making the experience worth checking out even if you're not traditionally a fan of retro games.

The adventure begins with little fanfare, putting you in control of mute protagonist Robin, an unlicensed mechanic in a world where technology is considered sacred due to its link to a dwindling magical resource that powers all things. This effectively renders her chosen profession illegal in the eyes of One Concern, a corrupt theocracy that rules the world with an iron fist. When Robin's actions inevitably provoke One Concern to hunt down everyone she loves, she becomes embroiled in a conflict that threatens not only the safety of her family but the entire world.

The strength of Iconoclasts' narrative isn't in the broader story beats, but the smaller emotional arcs of its characters. While the people you meet in your journey are inherently charming and likable, they're also broken individuals, consumed by their own inadequacies and traumatized by the crimes One Concern has inflicted upon them. Iconoclasts' depiction of grief is realistic and powerful; it doesn't hesitate to explore the cast's emotional issues, often resulting in moments that fundamentally alter their identities in unexpected ways. There's a real sense of growth, with each character transcending their wit-laced dialogue and evolving into people with affecting, relatable plights.

Unsettling events occur throughout, so it helps that Robin is such an uplifting presence. Her unspoken optimism and willingness to help those in need makes her an incredibly endearing hero. Robin's endless strength and kindness in the face of a world permeated with religious and political corruption--not to mention her own emotional issues--serve as rays of hope in an otherwise dark journey. In the multitude of disasters that befall your allies, you're always compelled to keep pushing further, if only to see how Robin may hope to fix the world's atrocities.

As Robin, it's a joy to move and engage in combat. With her trusty stun gun and wrench, you'll navigate various biomes and industrial complexes where all manner of foes await, from rampaging deer and purple slimes to One Concern guards and deformed mutants. Combat is primarily focused on running 'n gunning, but there's some added nuance thanks to an upgrade system driven by collecting materials to craft Tweaks, which are special items that alter Robin's abilities. The effect of Tweaks are subtle, mostly altering physical characteristics such as running speed, the strength of your wrench attack, or how long you can hold your breath underwater.

While tweaks are handy, they feel underutilized as there's rarely any urgency to rely on them to succeed. Their effects aren't all that noticeable, so they do little to change combat and exploration, which is disappointing. This can be somewhat remedied by crafting three of the same tweak to maximize their effects as opposed to diversifying the types you have equipped. Still, combat remains gratifying even with the less-than-impactful tweaks as the game relies on skill and precision over an excessively complicated upgrade system.

Rather than emulate Metroidvania games that favor open-ended exploration, Iconoclasts focuses on environmental puzzle solving. Areas are packed with brain-teaser-like trials where you're often pushed to think critically about how you can use your arsenal to clear a path towards the objective. For example, there are puzzles that involve moving platforms using a concussive bomb launcher. This sounds simple in theory, but it's far more involved when you have to consider how a bomb can only move a platform when the concussive force hits from a specific direction. This is further complicated by the fact that when you charge up the launcher, it fires a missile that can only push platforms after picking up enough speed. Iconoclasts' puzzle design encourages you to consider the smallest details, which can occasionally be overwhelming. But when you put in the time to work out a difficult solution, it's incredibly satisfying.

The emphasis on puzzle-solving even bleeds into boss fights, which are intense screen-filling battles that test your intellect as much as your reflexes. One boss has you switching between Robin and another playable character in order to work through a series of specific steps to reveal its weak point. While the game is quick to surprise you (and even make you laugh) with its bombastic boss fights, there's surprisingly more tactical complexity than simply shooting at them until they're dead. As a result, you're often challenged to completely revise your strategy at a moment's notice in case a boss becomes invulnerable to your attacks.

Iconoclasts is a sincere and compelling adventure that anyone with respect for fantastic storytelling and 2D-action can enjoy.

When Iconoclasts' end credits begin to roll, it's bittersweet to see the journey come to a close. After solving every puzzle and witnessing the finale of its poignant narrative, you can't help but reflect on the growth of its characters and your impact onto the world. The game will shock and surprise you with how gripping its story is, and it's likely to do so again in subsequent playthroughs of New Game+ with your expanded knowledge of character histories and events. Iconoclasts may be a callback to the style and mechanics of old-school games, but it's also a sincere and compelling adventure that anyone with respect for fantastic storytelling and 2D-action can enjoy. 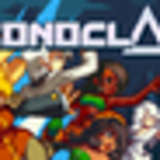 Matt jumped into Iconoclasts completely unaware that it had been in development since 2010. He's a big fan of Metroidvania games and spent 13 hours playing through the adventure. Suffice to say, he enjoyed every second of it. GameSpot was provided with a complimentary copy for the purposes of this review.