Like its predecessor, Icewind Dale II is simply a great role-playing game.

The days leading up to the release of Icewind Dale in June 2000 didn't make the odds of the game being a success look very good. Billed as sort of a dumbed-down hack-and-slash version of the epic fantasy role-playing game Baldur's Gate, Icewind Dale also happened to hit the shelves on exactly the same day as Blizzard Entertainment's very highly anticipated Diablo II. Surprisingly, Icewind Dale wasn't drowned out by Diablo II, but instead seemed to ride that game's wave of success. Good thing, too, because Icewind Dale was a great game that deserved an audience. Though heavily focused on action, it was anything but dumbed-down, and it featured some impressive production values for good measure.

Arriving more than two years later, Icewind Dale II faces similar adversity. This has already been an outstanding year for computer role-playing games, thanks to some extraordinary games--particularly The Elder Scrolls III: Morrowind and Neverwinter Nights--that have undoubtedly raised the standards for the RPG genre. At a glance, Icewind Dale II doesn't look like much of a match for these ambitious games, mostly because Icewind Dale II still uses the ancient Infinity Engine first seen in Baldur's Gate in 1998. "Ancient" is perhaps too pejorative, actually--"immortal" may be a better word to describe the engine, because the fact is, Icewind Dale II plays great. And though the likes of Morrowind and Neverwinter Nights have proved that a role-playing game can play and look great, most RPG fans would agree that good looks aren't as important as excellent gameplay.

Like its predecessor, Icewind Dale II is a Dungeons & Dragons-based role-playing game set in the popular Forgotten Realms universe. It offers a similar blend of role-playing and pure, intense tactical combat, but it weaves an entirely new story and poses a more significant challenge. Though action-oriented by all means, Icewind Dale II is a considerably long game, and it will provide plenty of lasting value even to those expecting a lot of bang for their role-playing buck.

Icewind Dale II does have a lot in common with its predecessor. It features many of the same graphical and aural elements as its 2-year-old forebear, and it basically has a similar pacing and style. However, unlike the original Icewind Dale, the sequel happens to use the relatively new 3rd Edition Dungeons & Dragons rules, which have much more depth than the classic 2nd Edition rules featured in games like Icewind Dale and Baldur's Gate II. At the very least, the new rules make the gameplay of Icewind Dale II noticeably different than that of its predecessor, enough so that it succeeds in providing an experience that's original in its own right.

Icewind Dale II is structured much like the first game. You begin by creating a party of up to six different characters, though you have the helpful option to quickly select a prefabricated party if you want to jump right in. All characters begin their lives as first-level neophytes who are sometimes barely able to hit the broad side of a barn, much less a savage goblin. So you'd better cross your fingers, because the game doesn't tarry in putting you into an action-packed situation. In fact, you'll be fighting almost from the start, in your efforts to defend a humble town from an invasion by the vicious green-skinned races.

The plot thickens, the combat gets more intense, you gain levels, you find better equipment, and you learn better spells (several hundred are available), and suddenly you realize that your party has grown immensely powerful. Like any great role-playing game, Icewind Dale II offers a very subtle yet somehow palpable sense of continuous character development. Experience points are hard-earned from combat and from quests, and changes in experience level tend to be few and far between (though more frequent than in 2nd Edition D&D), yet you'll still get the impression that your party is gradually but noticeably growing stronger and stronger. Interestingly, the early stages of Icewind Dale II are some of the hardest, as you'll be challenged just to keep your stalwart band alive through each battle. Later on, death itself will hardly be an issue, as you'll have such mighty spells at your disposal that you'll feel as though virtually nothing will be able to defeat you. The fact that you'll still have to overcome some very stiff challenges just goes to show how expertly paced Icewind Dale II generally is. There's nothing like feeling you're on top of the world in an RPG, only to come face-to-face with a truly mighty foe who's more than your equal.

Icewind Dale II offers many more choices when creating and developing your party than its predecessor did. Many more character races are available, including the ever-popular dark elves (also known as the drow), as well as different subraces of dwarves, gnomes, and, of course, elves. Some of these character races are quite powerful from the get-go, but they're balanced out by having an experience penalty. More character classes are available than before, too, namely the 3rd Edition barbarian, monk, and sorcerer classes. The old standbys are all still here, of course, and thanks to the 3rd Edition revisions, they're even more distinctive than ever. Wizards, clerics, paladins, fighters, druids, bards, rogues--all these character types and more are interesting and viable in Icewind Dale II. Some character classes seem far more powerful than others--3rd Edition fighters are incredibly strong, for example--but you'll still have to form a diversified group of characters for best results. As you rise in level, you can customize your characters with various special feats and other abilities, as well as by multi-classing your character--that is, learning an entirely new profession. Like in the previous game, the fact that you can play the game using entirely different types of characters adds some compelling replay value to the sequel.

There's replay value to be found in other areas, too. Icewind Dale II offers a feature first introduced in the Heart of Winter expansion to the original game, called the heart of fury mode, that ramps up the game's difficulty considerably but also awards your characters with even greater experience bonuses. As before, a cooperative multiplayer option is also available, letting up to six players control the party.

The main draw is still the standard single-player game. Though the Infinity Engine is undeniably showing signs of age, at the same time, Icewind Dale II's developers clearly are very adept at making it do what it does best. In fact, in many ways Icewind Dale II represents the best use of the Infinity Engine's prerendered, isometric settings to date. Each of the game's big areas is complex and extensively detailed, often packing in far more quests, encounters, and battles than you'd ever think were possible. The combat is persistently challenging and rarely straightforward, and the occasional puzzle is added for a good change of pace. The areas take a long time to get through, and yet you don't have to do too many annoying things like constantly search for traps or go back the same way you came in. It's true that you'll sometimes be forced to reload saved games just to gain prescience of a combat situation, but that's been the case with pretty much every other Infinity Engine game. In any event, Icewind Dale II remains fun to play.

Like the original, Icewind Dale II is a mostly linear game that's split up into chapters, and throughout them, the game provides an engrossing story that keeps you focused on the action and interested in the circumstances. At the same time, Icewind Dale II does a better job than its predecessor of letting you role-play. The addition of skills like bluffing, intimidation, and diplomacy work their way directly into the dialogue options that are available. So, for example, depending on whether you lead with your neutral evil human fighter or your lawful good elven paladin, you'll often get different results in your conversations with the game's colorful non-player characters. Every Infinity Engine game has been plot-driven, and Icewind Dale II is no exception. You'll be happy to know, then, that the game is very well written, offering up a number of strong characters and serious themes but also providing a healthy dose of comic relief on occasion.

If you've played Morrowind or Neverwinter Nights lately, let alone any of this year's many graphically impressive games, then starting off in Icewind Dale II will be a little tough on your senses. The game's graphics really don't look like much at first. The small, awkwardly animated 2D characters, the ugly black fog of war covering each area, and the flat (albeit detailed) scenery makes for a game that looks, at best, decent. However, a newly revised interface, now visible only along the bottom edge of the screen, is a big improvement on the spread-out interface of all previous Infinity Engine games, and many of the locales you'll visit actually do look quite good, though that doesn't change the fact that Icewind Dale II generally looks dated. The game doesn't even offer much in the way of new character portraits to choose from when building your party, opting instead to recycle most of the old ones. Fortunately, the old ones still look great. Of further note, the retail release of Icewind Dale II does suffer from some technical issues, which we experienced in the form of occasional crashes to desktop. Also, amidst the game's many twisting passageways, the pathfinding for your characters can get pretty bad, requiring you to micromanage their march.

Though Icewind Dale II mostly uses recycled sound effects and player character voices, the game otherwise lives up to the very high standards for audio set forth by previous Black Isle Studios role-playing games. A stirring, impressive symphonic soundtrack filled with soaring strings evokes the same sense of grandeur and adventure as the score from the original Icewind Dale, yet with some distinctly different touches. Jeremy Soule, the composer of Icewind Dale soundtrack (as well as the scores for this year's Dungeon Siege, Morrowind, and Neverwinter Nights), didn't actually do the music for this sequel, but his replacement, Inon Zur, does a truly fantastic job that's perhaps even better than Soule's effort in the original Icewind Dale. Meanwhile, the voice acting in Icewind Dale II is as great as you've perhaps come to expect from a Black Isle Studios role-playing game, though there aren't too many celebrities in the voice-over cast this time, unless you count Gabrielle Carteris, Beverly Hills, 90210's Andrea Zuckerman.

Like its predecessor, Icewind Dale II is simply a great role-playing game. The designers clearly understood what role-playing gamers want to see and experience in such a game, and they provided plenty of it. The game somehow manages to be long despite having such a brisk pace, and the balance between the story and the action is well maintained. The action itself might appear to be all mindless hacking and slashing, with your small party often having to take on droves of enemies, but in truth, clever tactics are required to make it through to the game's conclusion. So despite Icewind Dale II's somewhat antiquated presentation, it's still very easy to recommend to anyone who's enjoyed previous Black Isle role-playing games--or any of this year's other great RPGs, for that matter. 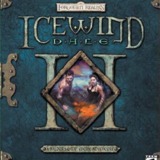