I Have No Mouth, and I Must Scream Review

Computer gaming, and the graphic adventure genre in particular, may be in serious need of innovation, but this run-of-the-mill adventure doesn't provide it.

This interactive sequel to Harlan Ellison's famous short story of the same name was the subject of much ado before its release. Most of this hype came from the notorious curmudgeon himself, who criticized the state of computer entertainment while promising that his foray into gaming would provide players with a new experience.

Unfortunately, Ellison was only partly right. Computer gaming, and the graphic adventure genre in particular, may be in serious need of innovation, but this run-of-the-mill adventure doesn't provide it. I Have No Mouth, and I Must Scream is replete with all of the shortcomings of its genre. There are numerous dead ends and illogical puzzles—for example, you must flush a toilet three times to access a hidden room. There are also many programming bugs; characters will walk backwards across the screen and even vanish without warning.

To be fair, I Have No Mouth… does experiment with some interesting concepts, and the dark tone of the original short story is maintained with bleak artwork and depressing situations. But the so-called “ethical decisions” these five imprisoned souls must face are no more than red herrings, providing only stopping blocks to progress or disturbing scenes with no tangible purpose. More disturbing is Ellison as the voice of AM (the evil supercomputer which has imprisoned the five protagonists), which may as well be renamed HAM after his over-enthusiastic performance.

Die-hard adventurers will certainly find a challenge (especially during the incomprehensible end-game) and Ellison aficionados may be intrigued by this extension of his work, but I Have No Mouth… doesn't prove to be a worthy translation of the sci-fi classic. Instead, this title relies on the frustrating cliches and roadblocks that have plagued the adventure game genre since its inception. 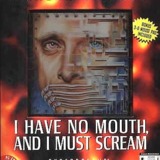 I Have No Mouth, and I Must Scream
Follow