HyperSonic.Xtreme, a new futuristic racing game from Majesco, is a game that would never have existed had Wipeout not come before it. The game's overall sense of style, from the track designs, to the ship designs, to the choice of spacey electronic music that plays while you race, is highly derivative of Psygnosis' enjoyable racer. If you liked Wipeout, this could have been a good thing. It could have, but because of the inconsistent graphics and horrible, horrible physics in HSX, the game is virtually unplayable by anybody.

The gameplay options are kind of lean, but what's there is the stuff you would care about. You can choose between time trial and cup races, and within these modes you can go on either the arcade circuit or the slalom circuit. The key difference between these circuits is that the arcade circuit puts you on a not-so-circular track for three laps, while the slalom circuit tracks simply have a beginning and an end and no laps. All told, there are around 30 different tracks to race on in HSX, though you'll need to place high in the cup races in order to unlock a good majority of them.

One of the most highly touted features in HSX is its track editor, and it's actually surprisingly robust and easy to use. In fact, it's entirely possible to re-create the premade tracks in HSX using the in-game editor. The tracks themselves are pretty consistently well designed and make good use of the antigravity nature of the craft you're piloting. Tracks will loop, twist, and turn, and you'll often find yourself clinging to the underside of the track, with terra firma right over your head. One of the less-endearing track-design features in HSX is the inclusion of jumps. These jumps usually require you to clear a pretty huge gap, and if you don't launch just right or don't have enough turbo boost, it's easy to fall short and watch your ship wreck into a mountainside. What makes these jumps really punishing is that after you wreck, the game forces you to go at the same jump all over again.

But this is just one symptom of the most damaging overall problem with HSX, which is a seemingly unfinished physics engine. While you're on the straight and narrow, the ships generally handle like they should, gliding from side to side like a rocket-powered vehicle should. But when you start dealing with hard turns, and sometimes just at random, the gliding stops, and your ship starts turning on its axis, which leaves you at the whim of wherever your momentum was taking you before you lost control. Occasionally, while attempting to hug a hard outside turn, your ship will lose its grip on the track, and you'll simply fly off the track until you make contact with something hard--usually, the ground. These problems are supremely frustrating and make the game nigh unplayable.

The game also suffers from some pretty bad frame rate problems. Curiously, the root of most of the choppiness in HSX seems to come from the game's occasionally excessive use of special effects. The game sports some rain and snow effects, and the rain will do that thing where it's supposed to look like it's beading up on the camera lens, but the beads then disappear, and the effect just comes off as looking cheap. When your craft sustains a certain level of damage, it will start belching out clouds of black smoke, partially obscuring your view and turning the game into a choppy mess. The real irony here is that if these not-so-impressive effects had been completely stripped from the game, the game, on a whole, would have looked better. The tracks look clean and sharp, paying much homage to Wipeout with lots of safety-yellow arrows on top of various types of gray steel, or space-age polymers, or whatever it is that these futuristic racing tracks are made of. The ships also look pretty slick, albeit derivative, and each is relatively unique in its design. Not much attention is paid to the surrounding environments, and you'll usually just be racing across fairly nondescript expanses covered in differently themed textures.

The music in HyperSonic.Xtreme is a pure tribute to the very first Wipeout game. All of the songs capture the same sort of dreamy grooves that populated that soundtrack, and in a few of the tracks you'll hear sound almost identical to some of the Wipeout music. The rest of the sound is pretty bare-bones, with no announcer and only the occasional fanfare when you run through the grandstands and with the constant blare of rocket engines.

There are two things that make HyperSonic.Xtreme kind of tragic, instead of just plain bad. First, there's the fact that Majesco is publishing HSX as a value title and debuting it on store shelves for a mere $10. Second, there's a lot that could have been liked in this game. The tracks are generally well designed, the music is a good fit for the setting, and the track editor is highly functional. The low, low price point and the relative wealth of positive attributes almost make some of HyperSonic.Xtreme's dire problems forgivable. Almost. Instead of spending your $10 on a copy of HSX, you'd be better off digging up a copy of Wipeout, Wipeout XL, or Wipeout 3 for the PlayStation. 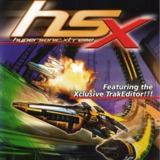 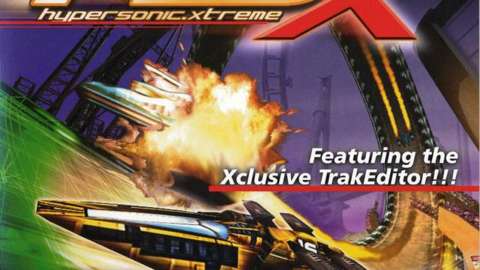