Hype is a polished and enjoyable 3D action-adventure.

Hype - The Time Quest is Ubi Soft's attempt to produce a version of Zelda: Ocarina of Time for the PC. That's not a cynical interpretation of the company's motives; the game's press kit mentions Zelda at least as much as it mentions Hype itself. So let's cut right to the chase: Hype is no Zelda. It's not as long, not nearly as deep, less fun, and the name isn't even as good. However, except for the name part, the same complaints can be made against virtually every game ever released. Taken on its own terms, Hype is a polished and enjoyable 3D action-adventure.

Hype's world is based on the Playmobil toy universe - one small portion of it, at least. Those hoping to travel through time to the wildly different eras portrayed in the various Playmobil sets may be disappointed to learn that the entire game takes place in the medieval period. You are Hype, brave knight in the service of King Taskan IV. Flung backward in time by the King's supernatural nemesis, the Black Knight Barnak, you must bop your way back through four successive Taskan dynasties to defeat Barnak, save the realm, and be reunited with your betrothed, Princess Vibe.

As you might expect from a game based on the Playmobil line of toys, Hype is ostensibly aimed at children. The adventure is strictly linear, the puzzles are fairly simple, and fallen enemies are permanently knocked "unconscious" rather than killed. But the story is engaging and packed with enough surprises to keep older gamers playing. The time travel concept is utilized well in several puzzles, which become more complex as the game progresses and the different eras become accessible. If Hype's tasks aren't generally difficult, they're at least cleverly constructed. The game's cute, evil Playmobil Knights Templar, Playmobil torture chambers, and visitations from hundred-foot Playmobil gods are somehow more intriguing than the same subjects presented straight in more adult-oriented games.

Though Hype's characters look like the simple yet stylized little dolls that are the game's inspiration, they're well suited to telling a story. Each character's head is a perfect sphere with two dot eyes and a dot mouth. The eyes and mouth are constantly in motion and can express a lot of different emotions. All the game's dialogue is spoken, and both the writing and voice acting are top notch. The uncomplicated but emotive faces combined with high-quality voice work and fluid body animation result in more believable characters than in many games with much more complicated character models.

The environments in which you play are often pretty amazing as well. Graphically, Hype features large, geometrically simple areas with great lighting effects and texture work. The game's shadow effects are among the best yet created. Fires bathe rooms in an eerie red glow and cause characters to cast elongated shadows on the surrounding stonework. The four eras that Hype must visit have the same geography - Taskan's castle and its immediate environs - but each occurs during a different season and has major architectural and graphical differences. More than a few of the backdrops are truly spectacular, such as a large treetop city whose high leafy ceiling is perforated by shafts of amber light.Hype's magic system isn't quite as spectacular as its graphics. Spells come in three categories - fire, electricity, and ice - and become available as the game progresses. There's a total of twelve spells, but unfortunately, they're neither very pretty nor very useful. All of the spells are offensive in nature and are basically projectile weapons. While you may occasionally use one to solve a puzzle or simply to try something different, they're harder to aim and slower than your sword attack. Almost every enemy is most effectively dispatched using just your sword, making the entire magic system seem unnecessary.

Though Hype's developers took their inspiration from Zelda, they unwisely chose to dispense with one of that game's best features, the ability to lock the camera onto enemies during combat. Hype includes a strafe key that keeps you pivoted around a fixed point, but this focus is generally useless when you really need to be locked onto a moving enemy. Boss battles are often especially frustrating because you'll often get hit while simply trying to keep your opponent in view.

Hype's flawed save-game mechanism adds to the frustration. You can only save your progress at podiums that are scattered around the landscape. They're usually in logical places, but in a few cases their position is baffling. One boss monster's closest podium is at the bottom of a ladder leading to its lair. The problem is that the save point is across a level transition. So every time you get knocked out while fighting the boss, you've got to wait while the podium area loads up, then walk three steps and wait again while the boss area reloads. There are several situations like this, usually right before a major battle that inevitably takes numerous tries to complete.

Hype is also a little too linear. There are a few side quests to complete, but none of them are particularly thrilling. You eventually befriend a dragon on whose back you can ride, but unlike Zelda's horse, this sequence is more of a mandatory bonus game than a fully integrated play element. Hype takes 15 to 20 hours to complete straight through and offers no compelling reason to return to the game once you've finished it.

These few drawbacks aside, Hype offers a good story combined with first-rate production values. It's a game suitable for children that's sophisticated enough to attract adults. Think of Hype as a Zelda simulation - it's a fun diversion that captures enough of its inspiration's spirit to be worth playing but doesn't match the actual Zelda experience. 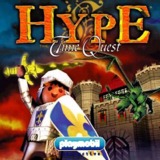